Home Magazine Relationships He Isn’t Trying to Annoy You on Purpose – 9 Ways Men... 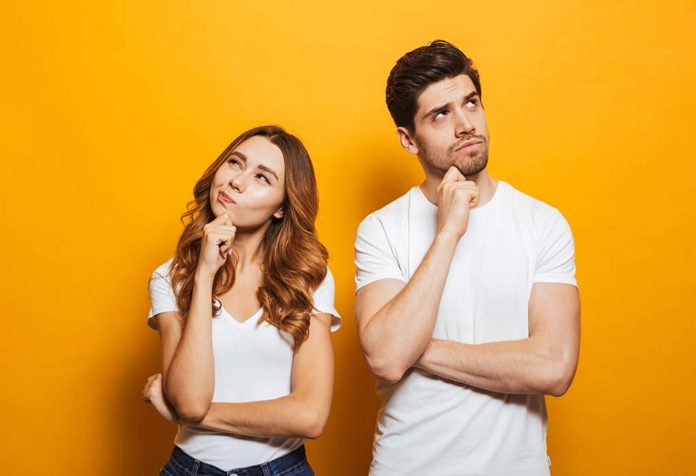 If you’ve ever wondered why your and your man seem to have different thought processes, we’re here to give you the answer to this mystery!

Ladies, here’s a situation that may sound familiar. You’ve had a really bad day. The kind of day where the universe seems to conspire against you. Your car broke down on your way to work; your boss wasn’t happy because you were late to the meeting you were supposed to preside over; you accidentally walked into the men’s room because you were too engrossed in your phone; your stupid diet wouldn’t let you indulge in your colleague’s birthday cake; and now all you want to do is run home and vent your heart out to your man.

He listens to you let off steam for an entire hour, nods throughout your story, and then responds with – “So, what should we have for dinner? I’m thinking chicken curry, you?”
Which is enough to make you wonder if all he heard over the past hour was probably “…blah blah car blah blah boss blah blah cake…mmm…fooood…” Ring a bell at all?

Everything isn’t black and white; it’s all shades of grey – except when it comes to men and women. Apart from belonging to the same species, the two genders can seem to have almost nothing in common. And this isn’t a sweeping generalisation that we’re making! While the oft-quoted statement “Men are from Mars, Women are from Venus” isn’t scientifically true, studies have shown that there are plenty of differences between the way a woman’s brain functions, versus that of a man’s. Are There Differences Between the Male and Female Brain?

Men, the hunters, and women, the gatherers – these identities were established during the ancient days, when men used to hunt for food for their own and their family’s survival. Women, on the other hand, have primarily been associated with nurturing and taking care of their family. Over time, while we’ve evolved considerably, our primal instincts may still play a role in shaping our way of thinking and doing things.

More than the physical structure of the brain itself – for which researchers have mentioned that they wouldn’t be able to tell the difference between that of a man’s or a woman’s, if they were presented with an unlabeled brain scan – it’s the ‘brain roadmaps’ or the circuitry within the brains that shows significant differences.

Understanding this biological contrast can help you realise that your man isn’t trying to annoy you on purpose with those little things he does; it’s just that his brain is wired differently than yours!

9 Differences Between the Male and Female Thought Process

Read on to find out why you and your man seem to travel on parallel trains of thought sometimes!

The scientific fact is that, on an average, a woman’s brain is 14% smaller than that of a man’s. What is equally important to note is that women use their brain more efficiently than men do! Men use more of grey matter areas, which are localised in the brain, while women use white matter areas, which connect various processing centres of the brain with each other. Because the male brain makes very specific use of one hemisphere at a time for a task, men can provide devoted focus to the task at hand – and that’s it. A woman’s brain, on the other hand, uses a lot of portions of both hemispheres at a given time, because of which they can focus on several things at once. So the next time your husband wasn’t listening to your spiel while he was doing the dishes, fret not – at least one task was getting done properly! Women are just better equipped to multitask!

Women tend to have verbal centres present in both hemispheres of their brain, while men tend to have it in the left hemisphere alone. Apart from this, women tend to link their verbal centres with emotions, memories, and feelings, as compared to men. While your description of the recent wedding you went to was in terms of ‘dreamy location’, ‘gorgeous couple’, ‘amazing outfits’, ‘such a wonderful ceremony!’, he may condense all his feelings into the words ‘yeah, it was nice’. It’s not that he doesn’t agree with you or that he is indifferent – it’s just a significant difference in the way your brains function!

Have you noticed how you tend to ruminate over that one unfair comment your sister-in-law made about you ages ago, even though that issue has been done and dusted with? And when the fresh feelings of resentment make you want to vent out to your husband, he seemingly couldn’t care less? Thanks to the naturally higher blood flow to a woman’s brain, especially to an area called the cingulate gyrus, women tend to dwell on emotional memories way more often than men do. And it’s not because the latter is consciously avoiding thinking about stuff; it’s just that he’d rather think about an issue very briefly, spend even less time analyzing it, and then move on to another unrelated task. So before you blame him, understand that this could be more of biological thing than him not wanting to take your side!

4. Women are More Tuned Into Their Emotions Than Men

You know how you can pick up on certain signals and emotions that your husband is conveying, even when he’s absolutely silent? But when the roles are reversed and you’re expecting him to read your mind, he doesn’t seem to have a clue – even when you’re shooting him hints! Women have a larger limbic system (the part of the brain that controls emotions), which helps them identify emotions more, whether vocally expressed or not. Men, on the other hand, may need certain situations spelt out to them because they tend to rely on facts and logic to tackle any issue – and your eye-rolls and sighs may not really do the trick! The region called insula in the brain senses signals in our body; when you are empathising with someone, your brain imitates the feeling, which your insula reads and conveys to you. Women tend to brood on these feelings more than men, because they seem to have a greater function in their insula. Men tend to switch to a problem-solving mode almost immediately, which is a good thing! Because when it comes to a time of need, you’ll notice that his ability to maintain calm under stress is actually providing you logical solutions that the situation calls for!

When in the middle of an argument, nothing helps a woman out more than her ability to pull out facts, dates, faces, names, and even objects pertaining to a particular event from memory. Since women have more activity in their hippocampus (the region that forms and stores memories) than men do, you are able to remember a lot of (un)important details, that your man just cannot seem to recall! The fact that women also store more emotive and sensory information helps strengthen their memory bank. A study also showed that men don’t really pay attention to a lot of details such as a woman’s date of birth, her dress size, shoe size, or even her mobile number. This shows that when they do remember any such details, it’s because they have taken the effort to do so – so thank your man generously when (and IF!) he surprises you with a memento of your first date together!

7. Women Need a Combination of Things To Get Aroused; Men Need Visuals

Very simply put, all a man really needs to get going are visual cues. They have 20 times more testosterone in their bodies than women do, which make them concentrate on the physical aspects of sex more. Women, on the other hand, can take their time, because they consider a whole lot of things – the mood, the ambience, the scents, the sounds, and of course, the emotions!

Factually, women have a biological advantage when it comes to linguistic abilities, because they are more receptive to words and sounds. Similarly, the larger inferior parietal lobules in men give them a boost over women when it comes to mathematical ability. However, this is not to say that these skills are limited to a specific gender because we all know examples of exceptions to this rule in our own lives.

9. Women are More Sensitive to Pain Than Men Are

Even though all the factors affecting this situation are not known, it is believed that since a woman’s nerve density is greater than a man, her sensitivity to pain is higher. Hormones also play an important part in this matter. Apart from this, women tend to experience the psychological effects of pain more than men – which means that they tend to worry about pain more than men do, which can increase their sensitivity. Women Are As Fond of Taking Risks As Men Are!

Contrary to popular opinion, women aren’t as risk-averse as people make them out to be. As it happens, women have the same appetite for risks as men do – it’s just that the perception of what ‘risk’ really entails may have been biased. A study by Thekla Morgenroth showed that the traditional scale that was used to measure risk was not very gender neutral, which consequently showed that men took more risks than women did. She observed how cheerleading, which is dominated by women, isn’t considered a risky sport even though it can be potentially dangerous. While gambling is an accepted risk, ladies, we know how much of a challenge it is to cook a three-course dinner for a party of 10 in under 3 hours!

Watch: This Guy Explains the Differences Between Men and Women

Mark Gungor, a pastor and international speaker on marriage and family, explains the main differences between the male and female brains in this hilarious video:

While this speech is entirely for laughs and has no scientific backing at all, you can’t help but wonder whether it could be entirely true! After all, how many times have we caught our man staring off into space, seeming perfectly content with the monotony – while we struggle to clear our minds even during our meditation sessions!

So ladies, the next time you feel a surge of irritation when your man forgets an important date or tends to downplay his excitement over something important – pause. Breathe. Remember that it’s biology doing its thing, and that it’s all his imperfections that make him perfect!

Story of My 9 Magical Months