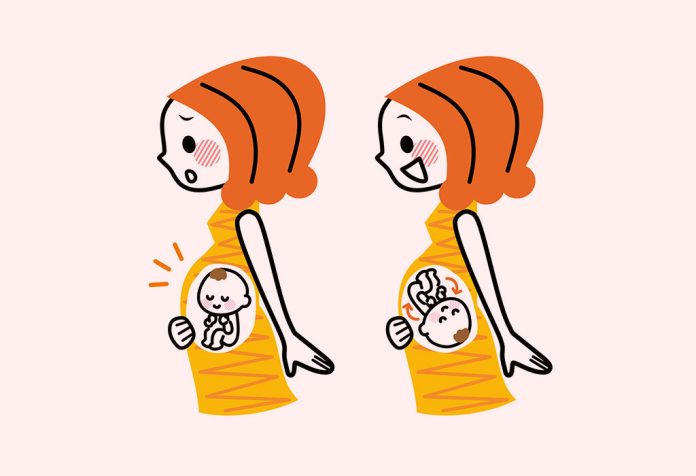 As you get closer to your due date, you might be concerned about the delivery and the health of your unborn child. During a routine check-up in the later stage of your pregnancy, your doctor may find out that your baby is in a breech position, and may recommend the External Cephalic Version. The External Cephalic Version (or ECV) is a manual procedure that is used to turn a baby from its breech position (bottom or foot facing down) to a head-first position.

This article discusses how the ECV procedure is performed, along with when it should be done (or not) and the outcome and risk factors of this procedure.

The breech baby position is a foetal position where the baby’s bottom or feet is facing downwards, instead of the normal head position. It occurs in around 3-5% of pregnant women after 37 to 40 weeks of pregnancy.

The probability of childhood handicap for a breech baby is as high as 16%, irrespective of the mode of the baby’s delivery.

Most babies in breech position are delivered through Caesarean (or C-section) instead of vaginal births.

What Is an External Cephalic Version Procedure or ECV?

The External Cephalic Version (or ECV) is a manual procedure where the breech baby (or foetus) is externally rotated from its breech position, first to a sideways position, and then finally to a head-first position. This ECV pregnancy procedure enables pregnant women to deliver their babies through normal vaginal birth, rather than undergoing a C-section.

The ECV procedure comprises of the following components:

During this step, the foetus is closely monitored to avoid any harm during the version procedure. Monitoring can be done through a foetal ultrasound to confirm the position of the placenta. An electronic foetal heart monitoring is used to measure the heart rate. A foetus, whose heart rate increases at a normal rate with its movement, is a healthy one, which is suitable for the version procedure.

During this procedure, your doctor will place both hands on your foetus’s head and buttocks in order to attempt turning it to a head-down position. Before the procedure, you will be administered tocolytic medicines such as terbutaline to relax your uterus.

Your doctor may recommend additional version procedures if the first attempt is not successful.

When Is the ECV Procedure Performed?

The ECV procedure is performed after 37 weeks of pregnancy. Though most babies repeatedly keep changing positions throughout the pregnancy, they usually settle into a cephalic (or head-down) position by the 36th week. According to statistics, 1 in every 25 babies is in a breech position after 36 weeks. Even though breech babies can take the natural position in the last month, the chances of this happening are about 1 in 8 (for first pregnancies) and 1 in 3 (for second and subsequent pregnancies).

At this stage, your doctor may recommend the ECV procedure before the start of your labour.

Why Is the ECV Procedure Done?

According to 2016 statistics, 93.2% of the breech babies in the U.S. are delivered through Cesarean operation. This has led to the rapid growth of baby deliveries happening through Cesarean.

The ECV procedure is done to improve the probability of natural vaginal birth.

When Is The ECV Procedure Not Recommended?

An ECV procedure is not recommended for expecting mothers if they:

Additionally, the ECV procedure is not done when:

What Is the Outcome of the ECV Procedure?

The use of the ECV procedure can reduce 3-4% of breech births to around 1%. ECV also contributes towards reduction in premature labour, breach-related complications, and premature babies.

Although there is a chance that following the ECV procedure, the baby can turn back into the breech position, ECV can improve the overall chances of having a normal vaginal birth. Is This Procedure Painful?

An ECV procedure usually lasts for around 3 hours. As ECV is a non-invasive procedure, the pain or discomfort factor is restricted to a limited time. However, based on patient response, the pain perception of the expecting mother is largely influenced by the success (or failure) of the procedure, along with the length of the procedure. Most women, who underwent longer procedures or a failed version, have reported more pain. On the other hand, women who underwent a successful ECV have reported less pain.

While foetus monitoring can reduce the risks of ECV, there are potential risks associated with this procedure, including:

What Is the Success Rate of This Procedure?

ECV has an average success rate of 58%. According to 2016 statistics in the U.S., 68% of the women who had a successful ECV went on to have a normal vaginal birth, while only 25.2% underwent a C-section.

Can Someone With a Previous C-Section Have This Procedure?

Factors That Might Affect the Success Rate of EVC

The success of the ECV procedure is dependent on multiple individual factors, including:

Other factors that contribute strongly to the ECV success rate are:

What If the Version Doesn’t Work?

Depending on the breech position of your baby and other individual factors, normal vaginal birth is still a possibility, even if the ECV procedure does not succeed.

An ECV procedure carries a minor risk of causing bleeding, which could lead to the mixing of the mother’s and the baby’s blood. To prevent this, pregnant women with Rh-negative blood type is injected with Rh immunoglobin to prevent a condition called Rh sensitization, which can lead to complications in future pregnancies.

What Methods Can You Try Other Than ECV?

If you do not want to opt for the ECV procedure, there are alternative methods to consider, including:

The right position of the baby in the womb goes a long way in ensuring a safe delivery both for the child and the mother. Speaking to your doctor about opting for an ECV, if the baby is breech, is the best way to determine if it is a procedure which is suited to you, or if there are any alternatives you may try instead.

My Journey of Being Infertile to Becoming the Mother of Twins

Eating Chocolate During Breastfeeding – Is It Good or Bad?

7 Essential Oils That Will Take Years Off Your Ageing Skin