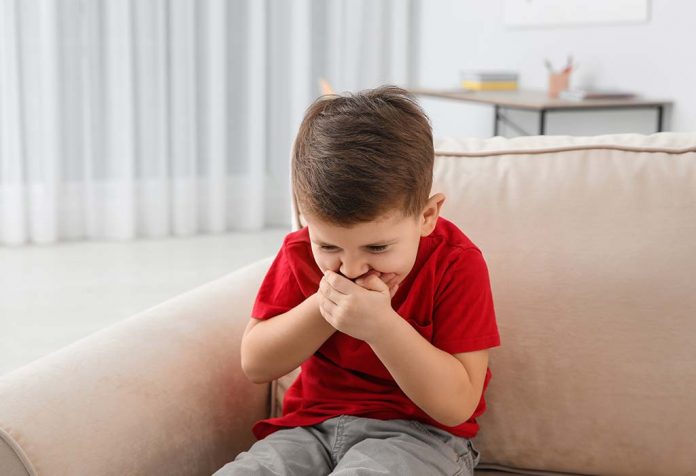 No parent would want to see their children sick. If your child keeps waking up during the nights due to an upset stomach, then finding the right solution to stop it is the only way you can take care of his health. A child vomiting at night (with no other symptoms present) will usually be a temporary event, and it mostly cures by itself. But sometimes, it could be an indication of a much serious medical condition.

Causes of Night-Time Vomiting in Children

In order to find the right solution for your kid throwing up at night, you will have to know what caused it.

Sometimes, vomiting is a sign that the body is saying “no” to something the child has consumed. Both uncooked and cooked food can cause food poisoning, and your child may have consumed something that was:

However, it can be hard to find exactly which food caused this problem because the child may not show symptoms for many hours. But once the body starts rejecting it, the child may vomit any time, even during the night.

You child may also show other symptoms, including:

Food sensitivity is something that happens when a child’s immune system overreacts to food that is otherwise harmless. If he is sensitive to that food, then the symptoms will start showing up only after a few hours. Eating a bedtime snack or a late dinner could be the reason for night-time vomiting if this is the case.

Think of all the foods your child ate in the last few hours, and check if it could cause problems. Some of these could also be ingredients hidden in processed snacks. Some common food sensitivities are caused by:

If it is a food allergy, then other symptoms would include swelling, rashes, or breathing problems, and it could become a medical emergency.

Other symptoms would include:

If coughs get worse during the night, it may trigger the gag reflex of a child, making them vomit. This can happen for both wet and dry coughs.

Wet coughs come with a lot of mucus, and are usually from the flu or cold. While sleeping, the extra fluid can collect in the stomach and airways. When the stomach has too much mucous, it can cause nausea and vomiting.

If your child is a mouth breather, a dry cough can get worse. While sleeping, breathing through an open mouth would lead to an irritated, dry throat. This will cause the child to cough more, causing him to throw up the dinner he ate. 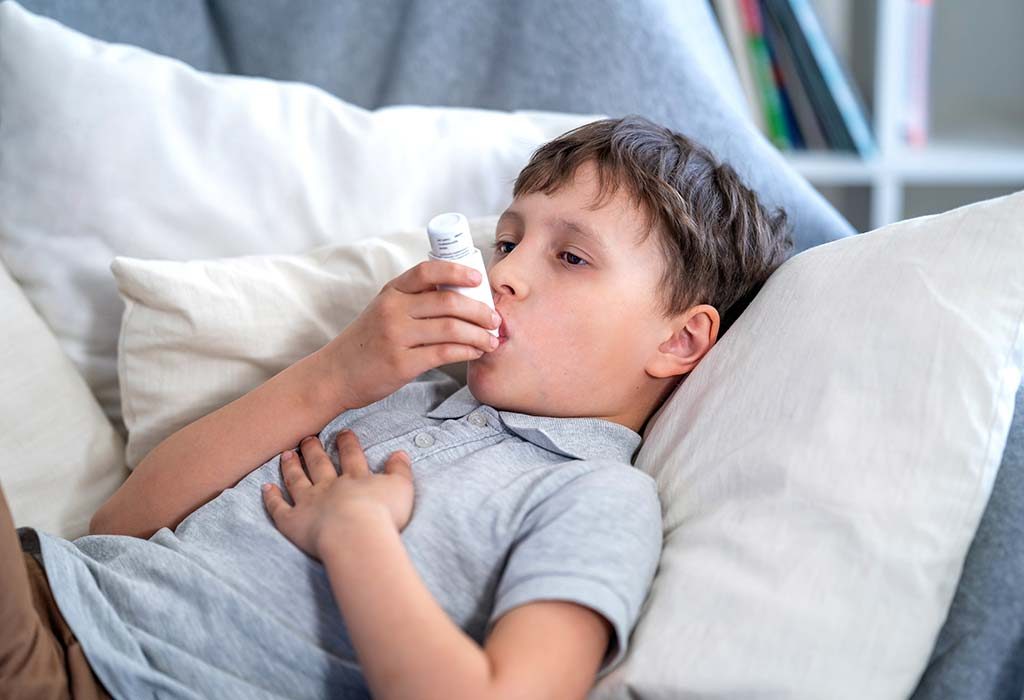 When a child has asthma, they might experience more wheezing and coughing during the night. The reason for this is that the airways become more sensitive during the night when the child is asleep. These symptoms of asthma may lead to vomiting and can become worse if the child has allergies or a cold.

Other symptoms may also include:

Acid reflux can happen in children that are above 2 years of age. If the child experiences it once in a while, then this is nothing to worry about. Acid reflux can set off vomiting, and will mostly be the reason for a child throwing up undigested food at night.

This could happen during the night if the dinner contained something that could trigger the acid reflux. While some foods relax the muscles between the oesophagus and stomach, others might trigger the muscles and cause them to make more acid. Some foods that are more likely to cause this problem include:

If acid reflux is seen often in your child, then they could have other symptoms like:

7. Snoring (with or without sleep apnea)

For various reasons, children can have severe or light snoring while sleeping, and some of these reasons may get better or go away as they get older. But if your child, while snoring, has significant pauses in breathing, then it could be a sign of sleep apnea.

If this is the case, you might find them breathing through their mouths, especially while sleeping. This may lead to coughing and dry throat, and occasionally, lead to vomiting. Even in kids that do not have sleep apnea, snoring can make it tough for them to breath, and they may suddenly wake up feeling like they are choking. This can cause coughing, panic, and vomiting.

Kids with allergies or asthma are more likely to snore because they get congested airways and stuffy noses more often.

How Long Does it Last?

Vomiting will last for only a few seconds, which could be followed by further episodes of regurgitation. If the vomiting is due to gastroenteritis or stomach flu, then it may be there for 24 hours, coming and going at various intervals. It may also occur while the child is lying down on the bed. If severe medical conditions are causing the problem, then the child has to be taken to the hospital, and treated before the vomiting subsides.

Signs and Symptoms of Night-Time Vomiting

For a child vomiting at night with no other symptoms present, it may not be serious. However, you could look for other signs like:

Treatments for Children Vomiting at Night 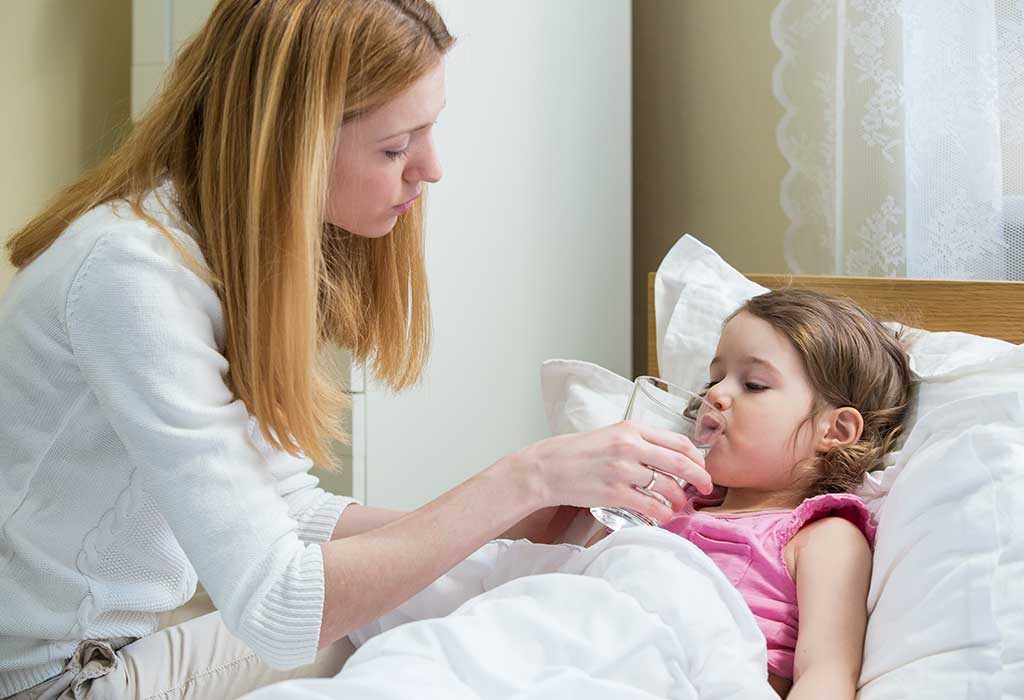 Usually, all it takes is one vomiting episode to correct the problem, after which, your child will go back to sleep. Other times, it can happen more than once and treating it can help stop or reduce the symptoms. Soothing or treating a cough can also help prevent vomiting.

As home remedies, you could avoid:

If you think that vomiting is caused due to the consumption of certain foods, then it is best to talk to your doctor, and check whether those foods should be avoided.

After vomiting, give your child some water to make sure they stay hydrated. You could either buy a rehydration solution or make one your own one. All you have to do is mix the following ingredients:

For older children, popsicles are considered to be a good source of rehydration.

If sleep apnea is the problem, then wearing a mouth retainer or dental treatment can help end the snoring. If your kid has asthma, talk to the doctor about which medications are safe, and how to use them at night to reduce the symptoms. Even if the child does not have asthma, but is coughing a lot during the nights, then talk to your doctor. This is because some kids with asthma seem alright during the day, and show symptoms like coughing at night. Your kid may need:

When Should You See a Doctor?

Vomiting too much may lead to dehydration. This is especially a problem if the child has diarrhoea. If your child is showing other symptoms along with vomiting, then it could be a serious infection. Talk to your doctor if your kid has the following symptoms.

If the child has the following symptoms, then take him to the doctor immediately:

Sometimes, food allergy or sensitivity can cause vomiting. If the child feels better after vomiting, then it is okay. Otherwise, food allergies could show serious symptoms that require urgent medical attention. These symptoms include:

If your kid has asthma, then look for symptoms that are linked to difficulty in breathing. Go to your doctor immediately if the child:

For a child vomiting at night, but is fine during the day, there is nothing to worry about since vomiting is not that bad. Most of the time, vomiting will stop by itself. But if your child is showing other symptoms, then it is best to call your doctor.

16 Weeks Pregnant: What to Expect