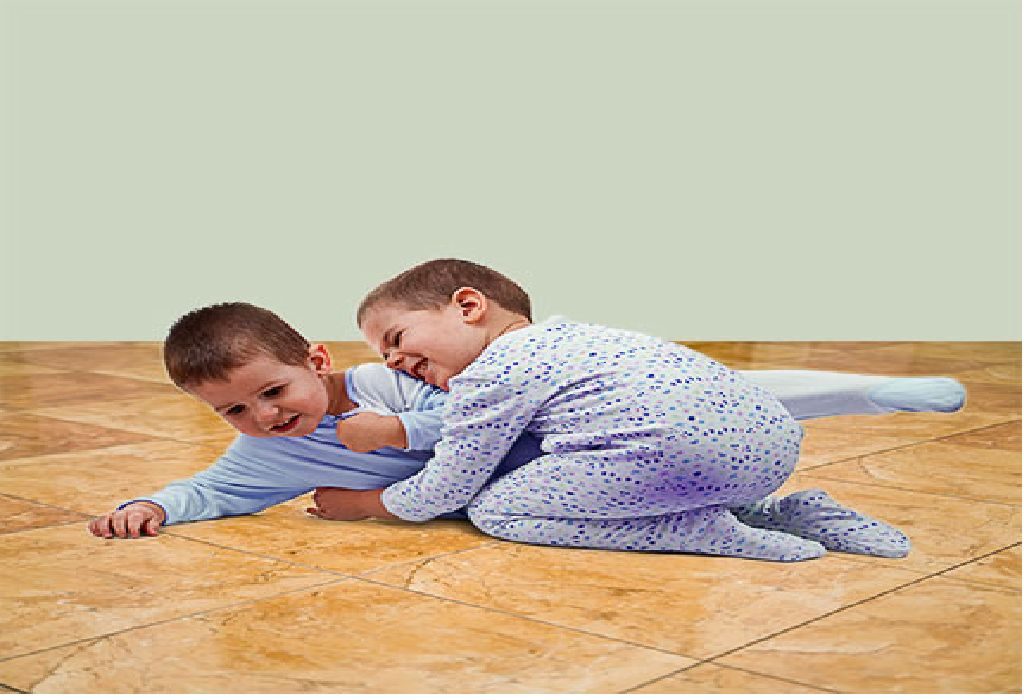 In this Article
If you have come across small kids chasing, rolling around or play-wrestling, don’t be shocked. It’s rough and tumble play which most toddlers and preschoolers enjoy at their age. Want to know more about it? Read here –

As parents, you must have some time or the other come across small kids, playing, indulging in cartwheels and somersaults, chasing, rolling around and play-wrestling. Or, you must have got worried watching your preschooler whacking other toddler’s head with his toy or sippy cup. This is what is called rough and tumble play. Most kids indulge in it. And what parents see as fighting, kids see as play and fun. Here, parents need to understand that it is not aggression or conflict. You will be surprised to learn that rough and tumble play helps children develop many skills. No wonder many preschools conduct rough and tumble play sessions like tumbling on a mat, bouncing, or a tug of war in a safe environment. It has been seen that more than girls, boys are rough-and-tumblers. There are a few reasons to this. From a very young age, boys are conditioned by the society to be strong and powerful. Rough and tumble playing addresses this need for power. Also, the family members always prefer to indulge in rough play with boys more than girls. They bounce them or wrestle with them. Most often than not, boys are found imitating how adults play with them. However, today’s children are exposed to too much media violence which has a negative influence on them. It might sometimes reflect in their rough play too. Here are ways to distinguish play-fighting from real-fighting and play-aggression from a real one.

Tips on Rough and Tumble Play for Parents

Here are some tips that will be of help to you if your preschooler is interested in rough and tumble play:

Setting up some ground rules is very important. It helps avoid unnecessary aggression and kids don’t get hurt. For example, for plays like tug of war, wrestling or climbing over one another, set rules such as no hitting on head, no hair pulling, no wearing shoes, etc. Also, kids should know that this is just a play and they can stop it whenever they want or are uncomfortable.

If kids are rough playing, they have to be monitored. Play can soon turn into aggression with kids. If you see happy and smiling faces, they aren’t trying to hurt each other. But if you see their expressions getting serious, you need to intervene to redirect kids’ energy, break the negative play pattern and get them to play positively.

If you are rough playing with your kid, be gentle with him to avoid any accidental injury. Especially with babies or toddlers, never shake them as it can cause bleeding in the brain. Also, be careful while bouncing your child on your knee or lifting him into the air.

If you see your preschooler getting frequently aggressive during his rough and tumble play sessions, maybe it’s time you take him to a doctor to work out his issues.