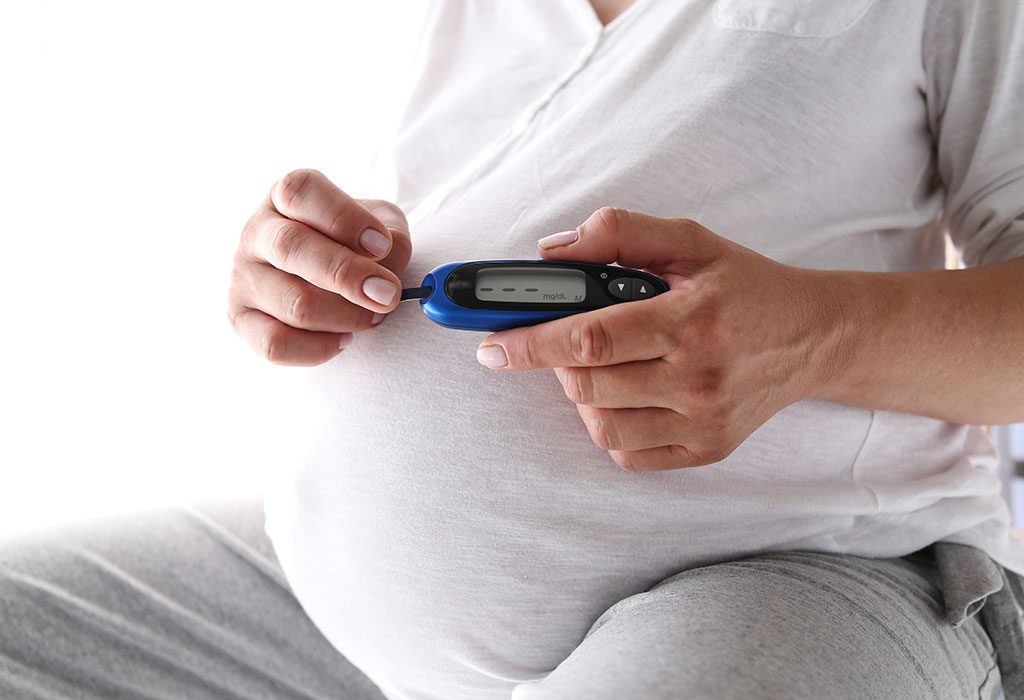 When a woman is pregnant, her body changes in a lot of ways. Besides the sudden change in hormone levels, there are also other biological factors that change, such as blood sugar levels. Put simply, gestational diabetes is not uncommon.

What Is Gestational Diabetes?

Fluctuation in insulin levels in the body is the main cause of gestational diabetes. During the process of digestion, carbohydrates from the foods consumed are broken down to glucose (sugars) in order release energy. This energy is used by the human body to carry out daily activities. Under normal conditions, insulin produced in the pancreas helps move this sugar to the cells, and prevents rise in sugar levels in the body.

During pregnancy, a membrane called placenta that provides oxygen and nutrients to the growing baby and removes waste products from the baby’s blood, is formed. However, along with its normal function, the placenta also releases several hormones that tend to interfere with the natural hormonal mechanisms of the mother’s body. It is known to disrupt and interfere with the production of insulin, as a result of which there is a rise in blood sugar levels, without enough insulin to break it down. This is the scenario in which a mother may develop gestational diabetes.

Another factor associated with gestational diabetes is weight. It is observed that obesity is closely linked to the body being insulin resistant. If the mother is overweight before conception, she may be a high risk candidate for gestational diabetes. Alternatively, keeping a check on weight gain during pregnancy is important.

Are You At Risk of Developing Gestational Diabetes?

One in seven women in India are at risk of developing diabetes during pregnancy. But, some women are more at risk than others. Here are some factors that increase the risk of gestational diabetes: Can I Lower My Chances of Getting Gestational Diabetes?

Whether you belong to the category of women who are at higher risk for gestational diabetes or not, you can definitely lower the risk of acquiring it. Working on your diet and exercise routines can help. Here are some steps to take:

There are not many pronounced symptoms that can indicate gestational diabetes, and hence your doctor would suggest a complete health check up at around the 24-28th week of your pregnancy, as this is the period where women are most likely to be diagnosed with high blood sugar levels. In case you are already at risk owing to factors listed above, this screening is suggested much earlier. However, here are some signs that might come as a warning, and if you encounter them, do seek a medical intervention immediately:

Several conditions that are common during pregnancy might be signs of gestational diabetes. Pregnancy and diabetes together can leave the pregnant mother exhausted. Usually, screening for gestational diabetes is done during the second trimester. However, if any of the above-mentioned symptoms are more pronounced, you might want to discuss them with your gynaecologist to decide if you need to be screened for diabetes.

How Does Gestational Diabetes Affect Pregnancy?

Mother’s blood sugar level usually restores to normal after their delivery. However, there are certain risks that are prevalent during pregnancy that you must be cautious about:

All the above-mentioned complications only indicate the risks that are associated with the untreated cases. Gestational diabetes simply increases the vulnerability to several conditions. But, a proper diet and exercise routine can help, in most cases.

How Gestational Diabetes Affects the Baby

Sometimes, the effects of gestational diabetes on the baby might be slightly more severe than on the mother. When the placenta interferes with the insulin levels, it in turn gets affected by the elevated blood sugar levels. In most cases, women with gestational diabetes who receive treatment on time have healthy babies, but leaving the condition untreated might have some impact on the baby: Remember that these are only the extreme effects of the condition. In many cases, babies stay unaffected by the mother’s diabetes. A safe option would be to identify the problem at the earliest, and keep the blood sugar levels within normal levels, not only to ensure your health, but that of your baby, too.

In most cases, the gestational diabetes test is performed between weeks 24 and 28 of pregnancy. Here are the two main tests that help find if the mother has high or low blood sugar during pregnancy. Follow-up tests and additional screening might be added as required based on the results.

The patient who appears for this test is given an oral glucose solution. One hour later, a blood sample is drawn to evaluate the blood glucose levels. Higher levels indicate an inability to process the glucose consumed, and the patient would be advised to take the OGTT.

The patient needs to appear empty-stomached for this test. A blood sample is drawn, and the patient is given an oral glucose solution. A second blood sample is drawn one hour later, and a third one after another hour. The test takes 2 hours to perform, and the patient is advised not to eat or drink anything in the interval. This helps ensure accurate results. If the blood glucose levels fall in the gestational diabetes range, the patient might be prescribed medications, or put be put on a special diet.

Right at the beginning of pregnancy, the doctor asks the mother-to-be a few questions regarding medical and family history to rule out the risks of gestational diabetes. Throughout the pregnancy, any warning signs are monitored and evaluated. If nothing appears abnormal, the routine GCT is prescribed at the right time. The test results help diagnose gestational diabetes. Gestational diabetes can be easily managed by making simple lifestyle changes. A fibre-rich, low-carb diet should be consumed, and frequent and small portions might help alleviate the blood glucose levels. Based on the results of the OGTT, the doctor might also suggest mild exercises. The blood sugar levels will be tested again after a gap, to check for any difference. If the levels fall back to normal, you will simply be advised to continue your diet and exercises. The doctor might keep a check on the baby’s health periodically. If the blood sugar levels don’t drop to normal, you might be prescribed medications or insulin shots to bring it down.

How to Control Sugar Level During Pregnancy

The simple way to control your sugar level is to work on your diet. Tweaks to what you eat and when you eat go a long way in improving your general health during pregnancy.

Here is a sample of how your diet plan should ideally be like:

Your dietician might prescribe a personalised diet chart, based on your test results.

Ideal blood glucose levels differ for pregnant women who had diabetes before they got pregnant, and for women with gestational diabetes. Here is a general guideline on blood sugar levels during pregnancy. Do remember that every pregnancy is different, and your doctor is the best person to take a call on your health.

How Can One Prevent Gestational Diabetes?

Being aware and equipped with all prerequisite information is the first step towards prevention. Not only will it help you understand all the risk factors involved, but also prepare you for what lies ahead. Talk to your doctor about your medical history to rule out any risks, and screen for diabetes at early stages if required. Be stringent about the diet and exercise plan prescribed for you, to maintain normal sugar level during pregnancy. Sweet cravings are common in some women, but unhealthy snacks and a high-sugar diet will do more harm than good.

What Happens to Mom and Baby After Delivery?

In most cases, nothing! The mother gets back to her usual healthy self, and the blood sugar levels drop back to normal, and the baby is healthy and happy. But, in the worst cases where the damage is severe due to very high blood sugar levels, late diagnosis, or if the mother’s body did not respond well to the medication, the effects might be seen on the mother and the baby. Subsequent tests might be scheduled for both to rule out the occurrence of type II diabetes in the mother and hypoglycaemia in the baby.

It is important to strive to maintain a healthy weight, and to continue healthy diet and exercise habits after delivery, too. This helps reduce the risk of developing diabetes in later stages of life, and during the next pregnancy. Do not skip the follow-up sessions for yourself as well as for the baby after delivery. Continue breastfeeding, while also ensuring that you consume a nutrient-rich diet. This will help achieve optimum weight, and ensure the best health of the mother and the baby.