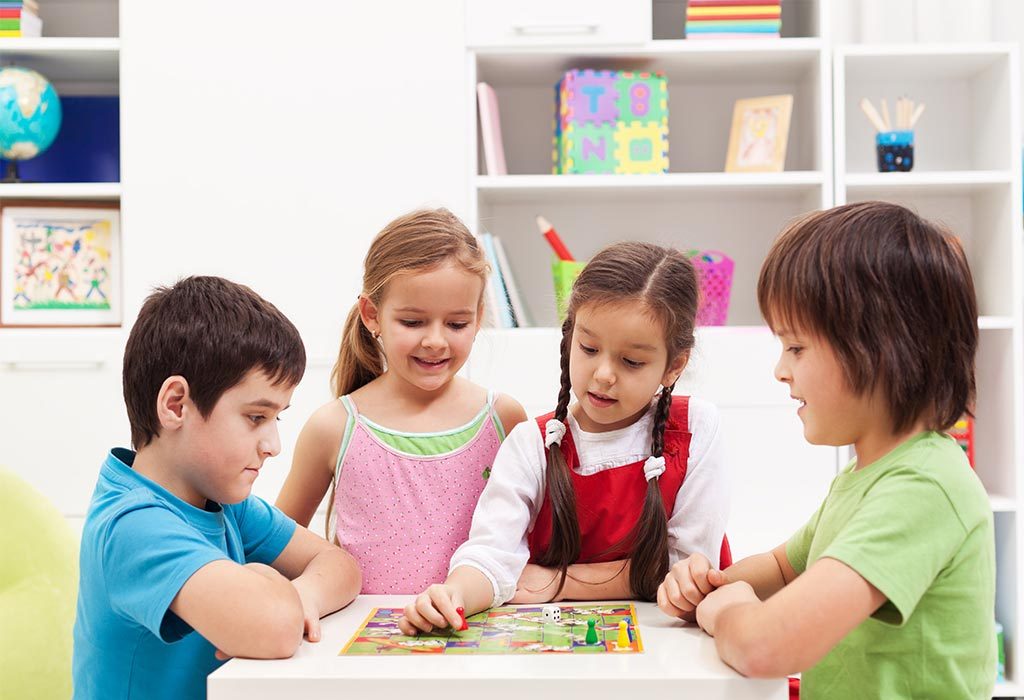 Board games have existed since the time we all were kids. Everybody remembers the classic Monopoly and Ludo and nearly all parents have grown up spending summers playing these games to no end. From sports board games to word board games, adventure sagas to strategy matches, it is time our children start enjoying the world of board games yet again. Here are some of them that can easily get your children and their friends hooked to.

Top Board Games for Children In Cluedo, we have a house where a murder has taken place and 6 suspects are present. For each game, a suspect, weapon, and room are randomly chosen and placed in an envelope. The players have to use their skills of deduction and find out the correct suspect, weapon and room for murder. Keeping a track of each other’s deductions helps others get closer to the answer.

One of the best board games for preschoolers, Hoot Owl Hoot is a co-operative game using colour-coded cards. The objective of each player is to help each owl reach its nest before the sun rises. Each colour card transports the owl to that particular location. There is also a special Sun card that brings the owl closer to daylight and increases the odds. Working together is necessary for bringing all owls to the nest and completing the game.

In the age of computers and programming, this is an exciting game to play. It teaches the basics of logic and programming, accompanied by making funny turtle sounds for added fun. By using cards that push your turtle in a particular direction, players can arrange the cards in a logical flow so that the turtle reaches its destination in the shortest time via the shortest route.

This game is a classic take on the tradition of American football. It contains miniatures of various fantastical characters such as trolls, orcs, elves, dwarfs, as well as humans. Two players pick their characters to form their own team. Each has their own strengths and players try to make the best team possible. With imagination and creativity in its focus, this is a new way of playing football.

Similar to fantasy football in some way, players compete in football on a grid map. The dice have various numbers on it that decide the number of yards each team progresses. A strategy is required in deciding which dice needs to be played and how to move ahead. Using offensive and defensive cards in the right manner helps each side play to their strengths.

Scrambled states is a great way to learn the geographical map of a country as well as have fun in knowing who can get it all right. There are cards for each state with information provided on them. The players have to get the right location of the state in the country, which makes you win that state card. The one with the most state cards becomes the head and the winner.

A great mathematical twist on the classic game of Monopoly. With the core concept same as before, the aim is to earn as many segments on the map as possible to be the winner. Here, for each segment, players have to solve a mathematical equation to be able to earn that segment. This not only induces a competitive spirit but also helps learn mathematics and solve problems quickly.

With a capacity of nearly 10 players, this becomes one of the best games for a party. In an overview, this game consists of two cards “Things” and “Descriptions”. One player chooses a description card with an adjective, while other players choose a thing card that best matches it. The best matching card wins and the winner then chooses the description card, and so on.

This game can be played as individuals or even as teams. The aim is to create a list for a category with each item beginning with the same letter. If the answers do not match with the other player of the team, points are scored accordingly. The player with the highest points wins.

This is a wonderful game to understand the beginning of society with a historical angle. Players undertake the role of leading a civilization from the very old ages to making it an empire. Players could either choose to be a more utilitarian nation or a military-driven country. Trading and scientific discoveries all become a part of this game, making it very exciting.

11. The Settlers of Catan

Similar to building a civilization, this is quite a popular game among the kids. The players in the game have to collect various resources and build everything from scratch. This includes entire cities, pathways, roads, docks, and all, giving rise to a fresh new map every time the game is played. Each player looks for opportunities to dominate the other player and the aim is to build an empire better than the rest.

As the name suggests, this board game puts the players in the role of scientists that need to work together to save humanity from deadly diseases. Players need to strategise together and come up with plans to find cures for the illnesses. All of this needs to take place before the disease outbreaks happen and working together is extremely important.

This game is quite addictive once kids get a hang of it. Each player plays the role of a merchant who is extremely wealthy and deals in multiple trades. From the acquisition of mines to manufacturing gems and jewellery, the game has it all. Players trade amongst themselves using cards and precious stones, to beat the other player in being the best merchant.

Set in the popular universe of Middle Earth, same as that of Lord of the Rings, players are majorly responsible for handling two armies – one belonging to the Free People, the other belonging to the Shadow Armies. With a variety of miniatures present in the game, it becomes extremely imaginative and creative to act out the story on the board and understand the mythos of each side.

Yes! There is a board game of the most popular TV show and the series of best-selling books. Set in Westeros and around the same characters, players choose the house they want to belong to and start taking strategic decisions in warfare to claim the Iron Throne in King’s Landing. Right from making allies to taking diplomatic decisions to deceiving the enemy, players will have a gala time while playing this game.

Star Wars comes to the board in this epic game set in the same universe. Star Wars grabs the attention of kids due to its setting and now this brings strategy to the fore. Choosing between rebels and the Empire, players make use of the miniatures and fight to defend themselves, while handling and managing multiple troops and starships.

The game consists of two spymasters, who are each other’s rivals. Each of the agents is privy to the identity and codenames of 25 secret agents. Players choose the teams they want to be in and work together to contact their agents before anybody else. Based on the clues that are provided, the players work towards guessing the right names, while a secret assassin silently kills others.

An extension to the classic “who am I” format of the game, this one is great fun for kids and especially at parties. Each player wears a headband and places a card that is randomly picked from a pile. Only the other players can see the card. The current player then has to ask questions that can be answered only in a yes or a no. The aim is to guess the card you are wearing before the time runs out.

This is a role-playing game set in an adventurous setting. Each player is a monarch and their aim is to expand their territory to make their kingdom flourish. By strategizing with other monarchs aiming to achieve the same, this makes for an addictive round of playing with each other and struggling to win.

As weird and funny as the name is, the game is just as fun and exciting. All it consists of is a deck of cards. Each player draws a card and keeps it with himself. If a player draws a card with an exploding kitten, he explodes and is out of the game. But, he can save himself if he has a defuse card or any other cards that can protect him and push somebody else out. This is a fast-paced game and has tons of moments of fun.

Taken from the name of a place in France, the game, too, is set in a French landscape. Every player is supposed to place their tile in the map of the game to create a particular entity such as a road or grass and so. There is no reading involved and only needs strategic tile placement. Placing a tile, a player decides what role he wants to play amongst a knight, a robber, or a peasant. The game continues till the last tile is placed.

One of the best board games for 6 year olds and adults, too. Twister comes with a spin-board and a sheet with multiple coloured circles. One player spin while other players participate on the sheet. Each player gets an instruction based on the spin and has to place his particular hand or foot on a specific coloured circle. This can give rise to funny poses all the time.

A straight-forward game that requires no instructions nor any counting. Termed as a great game amongst the board games for 3 year olds to 6 year olds, all the game has is the player tokens and colour cards. Simply pull a card and move the token to closest colour space from where you are that is of the same colour. The player to first reach the castle is the winner.

The king of them all, this board game has been popular for a long time. Known to be a fun-filled ride from beginning to the end, players go through the entire journey of choosing a career, getting married, having kids, and trying to win the game of life. Chance based occurrences take place as well giving someone else unfair advantage over you or helping you win a lottery and turn you into a millionaire.

A game that helps develop vocabulary and improve spelling all at the same time. Each player picks out seven tiles from a back and aims to make the best word possible that can net the highest score. The catch is that each word needs to be connected to an existing word on the board. Entire afternoons and evenings can be spent on a game quite easily.

There are plenty of board games available in the market.. And although most parents would straightaway opt for educational board games for children, it is important to note that many other games that end up teaching children a few other values that cannot be learnt any other way. Get innovative with fresh board games and grab your chance to be a child with your own kid again.

Playing board games is not only fun but it can also help in the brain development of kids. If your child plays board games, like ‘Scrabble’, ‘Chess’, and ‘Monopoly’ his vocabulary, problem-solving skills, and mathematical skills improve, making him a ‘word’ and ‘logic’ smart kid. To work on his other ‘smarts’, get him FirstCry Intellikit – active learning for little ones.