The Story of The Blind Men And The Elephant For Kids

The Story of The Blind Men And The Elephant For Kids 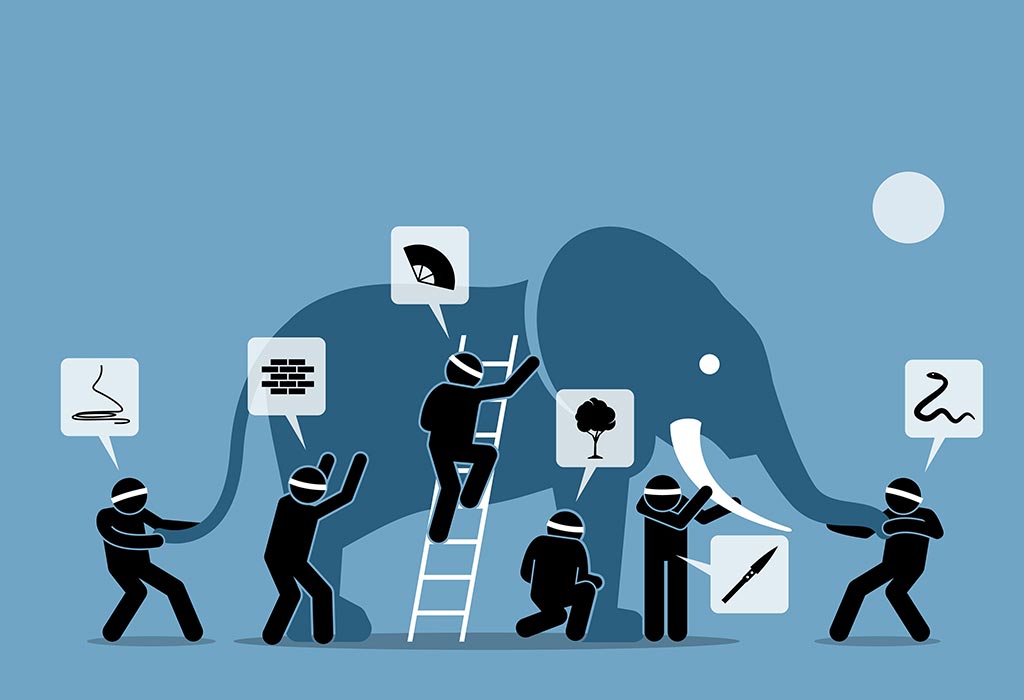 The story of the six blind men and the elephant is a funny tale told to children to help them understand the importance of not imposing one’s opinions on others. It has been mentioned in religious texts, picture books and is a popular bedtime read as well. In this post, we’ll cover the story and tell you how it ends.

Short Story of The Blind Men And The Elephant For Children

The six blind men and the elephant story is about six blind men who do not know what an elephant looks like. Since they’ve been blind from birth, they never had a chance to witness the animal. One day, while they were standing by the roadside and begging travellers to donate alms, an elephant herder happened to pass by. A wild giant elephant stopped and decided to rest for some time.

Here is how the story goes:

The six blind men once lived in a village. They had no idea what an elephant looked like and didn’t know about its size. One day, as they were begging on the roadside, an elephant stopped by.

Hearing the sounds of its footsteps, the blind men realized that the creature was close to them. Having never seen an elephant before as they were blind, they decided to feel it and guess what it looks like. The first blind man approached the animal and touched its back.

He said: “Look, the elephant is huge. It feels like a wall! This beast is a wall!”

The second blind man touched the elephant’s tusk and said: “Brother, you are wrong. No way is it a wall. I’m pretty sure it’s sharp like a spear! I can feel it! It’s round and sharp!”

The third blind man was amused and decided to have a go at the animal himself. He touched its trunk and said: “You two are definitely wrong! It’s not round, sharp, or tall like a wall! It’s like a slithering snake!”

The fourth blind man went towards its legs and reached out. He said after using his hands: “All three of you are wrong! It’s neither a spear, wall, or snake! The elephant is as tall as a tree!”

The fifth blind man decided to try his luck and felt bewildered after hearing his friends’ responses. He was very tall and happened to touch the elephant’s ear. “I think the elephant looks like a fan. The shape is unique.”

The sixth blind man found it crazy and didn’t say a word. He approached the elephant’s tail and touched it. He exclaimed: “You’ve all lost your senses as blind men. It’s neither a wall, spear, snake, tree, or fan! This animal is completely different! It’s a rope!”

The six of them each held a different opinion based on their experience. They continued to fight and argue throughout the rest of the day. The elephant soon got bored and walked away.

The moral of the story is that sometimes we’re blinded by our own beliefs and don’t see the reality. The six blind men didn’t realize this and were clouded by their judgments of the animal.

The fable of the blind man and the elephant was originally found in ancient scriptures such as the Buddhist and Jain texts. There are several Indian variations of the fable, and an alternate version of the tale talks about the six blind men coming across an elephant statue.

John Godfrey Sax, an American poet of the 19th century, adapted the fable and made his own story out of it for kids in Europe. Many children’s books and Indian publishers have interpreted the tale in different ways, which makes it unique every time one reads it.

In some stories, the blind men even trade blows and fight with each other when they come to a disagreement, thus not resolving their debate peacefully.  Other tales say that they stop fighting and instead decide to collaborate on their experiences and see what the whole animal feels like.

If it’s your first time reading your kid bedtime stories, the tale of the six blind men and the elephant is a classic read to get your child interested in stories. It introduces them to the wonders of the elephant and teaches them basic life lessons about the world.

Understanding the story will teach them not to be hard on others. Everyone is different, and each can have their own belief systems. It’s important to see the good points and flaws when deciding to judge, instead of being biased and sticking to one’s beliefs. Hopefully, your kids will appreciate the story and look back at its lessons when growing up. For now, we can all agree it’s a timeless tale that most kinds fondly reminisce as adults.