Home Pregnancy Labour & Delivery The Almost Unbelievable Story of a Baby Girl Who Was Born Twice! 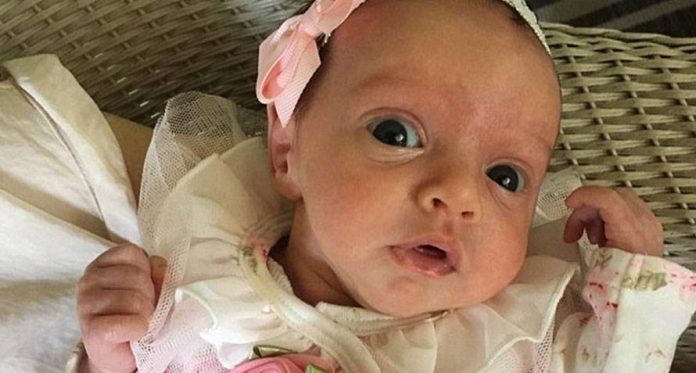 The birth of your baby is an event the entire family looks forward to for months! The grandparents have grand plans and the Dad-to-be can barely contain his excitement. The birthday becomes an annual celebration and quite the biggest party for you. But what if your little one was born into the world not once but twice? Wait, how can you possibly be born twice? Will that mean you will have two birthdays every year? What happened in the time frame between the two births? Well, the story of how and why this little girl was born twice will not only answer your queries but also amaze you with wonder and merriment!

It happened when mom-to-be Margaret went for a routine ultrasound just 16 weeks into her pregnancy. She hadn’t expected the frightening result. There was a tumour in the tailbone of her unborn baby! Tumours can be extremely dangerous even for fully grown adults. One can only imagine the diagnosis this meant for her little one. The cause for this tumour (called teratoma) is unknown, and while it is very rare, it occurs in girls four times more frequently than in boys. In some cases, it is possible to give birth to a healthy baby and then have her tumour dealt with. But for Margaret’s baby, this wasn’t an option. The tumour was competing with the foetus for the body’s blood flow. Very soon, her heart could just fail to keep up, ending her life. Everything looked very bleak…

It was then that her doctor suggested a medical procedure involving a seemingly impossible operation! Margaret’s womb would be opened up. Her foetus would be taken out and operated upon. The baby would be then put back in and the uterus would be sewed up. If this sounds horrifying, let us tell you that this would also be do-or-die. It wasn’t a straightforward decision for the parents-to-be. But they knew that this was the only hope their child had.

The operation took place. The baby’s heart slowed down to a standstill. It was a highly critical procedure where the bulk of her tumorous growth was removed. Things could go either way as the operation progressed. She was in a world for which she wasn’t ready yet. This was a first birth where she was fragile, ill and totally dependent on medical support. But she was somehow kept alive by a specialist. This little one was a fighter who battled on outside her mother’s womb for a whole 20 minutes.

“Once the surgeons reached the baby she was lifted so she was ‘hanging out in the air.’ Essentially, the foetus is outside, like completely out, all the amniotic fluid falls out, it’s actually fairly dramatic.”

After the operation, Margaret was kept on bedrest. And lo and behold, the baby made it through to nearly 36 weeks – a full term of pregnancy. She then came into the world as Lynlee Hope. This was her second birth. This was when she entered the world as a baby whose birth weight was normal and who had no health complications. The infant whose chances of survival alone had seemed faint some weeks ago was now as healthy as any other baby in the nursery.

Today, Lynlee has made a full recovery and the family is delighted with their newest member. For them, she stands for delight, love and hope – just like her name. Her story proves the amazing advancement that medical science has made and the miracles it is making possible. It also emphasizes the importance of routine testing during pregnancy, for had the tumour not been detected in time, this story would have had a very different ending. But let us dwell on the happiness of the moment. Both mom and daughter are perfectly healthy now and have embarked on a beautiful journey together. We do hope this little girl will get to celebrate two birthdays every year – she deserves to!