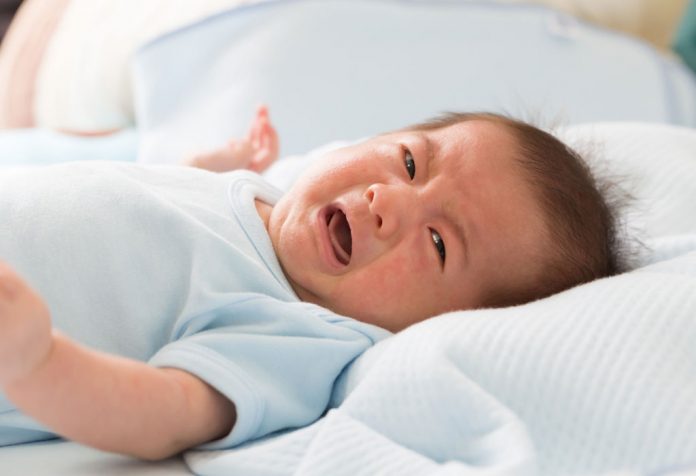 Nearly all infants throw up when they are small, either in a small, wet burp or a little vomit, occasionally. But if your baby vomits frequently, and forcefully, that’s a clear sign of pyloric stenosis. Read on to know what it means and how you can help your little one.

What is Pyloric Stenosis or ‘Forceful Vomiting’ in Infants?

Termed as infantile hypertrophic pyloric stenosis or congenital hypertrophic pyloric stenosis, it is unmistakable vomiting that emerges out in a gush, causing immense trouble for the baby. This usually happens when the pylorus passage, connecting the stomach to the intestine, cramps up and stops any food from proceeding further. In the absence of digestion, the stomach has no option but to push out the feeding via vomiting.

How Common is Forceful Vomiting in Infants?

Pyloric stenosis is a condition that’s generally observed a few weeks after birth. Hence, its presence in infants that are older than 24 weeks is a rarity. Amongst the younger ones, around one baby in every 500 babies seems to have pyloric stenosis.

Causes of Pyloric Stenosis in Infants

There doesn’t seem to be any certain reason behind the occurrence of pyloric stenosis in infants. It does have a hereditary trail, bringing a higher probability of its likelihood to occur in a baby, if the parent had a similar condition, too.

There’s also a connection of its occurrence with medication administered to the baby, either directly or indirectly. Babies who are given any antibiotics in the first couple of weeks right after birth, or given to mothers in later months of pregnancy and early months of breastfeeding, seem to have displayed this condition more often than not.

The signs and symptoms of the presence of pyloric stenosis can be clearly observed when the baby is approximately at the 3-week age mark. The most evident of them are: Doctors may immediately ask you to carry out certain tests if the baby is found to vomit multiple times, forcefully. Primary diagnosis usually involves the doctor looking for thickened muscle or a small lump, by feeling your baby’s stomach.

A conclusive diagnosis is obtained by carrying out a pyloric stenosis ultrasound, one of the most common techniques. Body imaging of the infant’s abdomen is undertaken to spot the cramped tract. At times, a Barium x-ray test can be conducted, too. A chalk coloured liquid is given to the baby, which helps the x-ray light up the area of the digestive tract.

A general lab test to check your baby’s blood and electrolyte levels may also be conducted to ensure its well-being. All these tests help rule out any other reasons for vomiting, bringing the diagnosis closer to pyloric stenosis.

The only way to treat this condition is via a surgical procedure called pyloromyotomy. It helps expand the connecting tract, so that food may enter the intestine and be digested. This decision is taken after factoring in the results of the radiology reports.

Prior to commencing with the surgical procedure, the baby might be given intravenous fluids to maintain a healthy electrolyte balance. Various blood tests might be conducted before moving ahead.

The surgery is conducted either via laparoscopy, involving a few small incisions or via an open surgery, which would be discussed with you by the surgeons themselves, who are specialists in infant surgery. General anaesthesia is administered and your baby goes to sleep so that the surgery can be conducted without pain. The surgery involves making an incision in the body to see the pylorus muscle and then making another cut on the muscle to spread the muscle. The inner lining of the passage is not touched and no tissue removal is involved.

The entire surgery lasts anywhere between 15 minutes to an hour. Post-surgery, the baby will still be inside the recovery room, until it wakes up from the anaesthesia. Babies are known to vomit for a couple of days after surgery since their body is getting used to it. Medication to dull the pain is administered along with intravenous fluids.

Once the baby seems ready to take food orally, a watered-down formula initiates the feeding. The formula is gradually made stronger to the normal amount, based on the progress of your baby’s response. On observing that the baby can feed and digest food properly, either via breastfeeding of formulaic intake, the doctor will discharge the baby, and you can return home.

For a few days, your baby will feed slowly and burp more than usual. This is normal and the general routine can be resumed after that. The doctors will advise you on various ways to keep the surgical incision hygienic and dry until it heals completely. Apart from that, your baby can be its full self and carry out all its activities without worry. The hospital will check with you after a week or so, and inquire about the progress. In case of any concerns felt by you or the hospital, they might advise you to come for a check-up.

The surgery does not increase any risks of stomach infection or gastrointestinal problems at all. Most babies are usually fine after the surgery and return back to normal eating habits.

Who Are Most at Risk?

On a gender distribution scale, forceful vomiting is observed at a higher frequency in males that are firstborn, and less common in people from the Asian subcontinent. Premature birth and smoking during pregnancy have been termed to be possible causes, too.

Pyloric stenosis surgery risks are rare and range from a minimum to negligible, in the probability of their occurrence. As with every surgery, small bleeding may occur in the course of the process or after it. The bowel lining might be accidentally cut in the rarest of the rare cases, which can also be immediately corrected during the procedure itself. Anaesthetics carry their own risks, and they are always checked for by conducting several tests before the surgery.

Does It Have Long-Term Effects?

Nearly all surgeries have had zero side effects on the babies. The pylorus allows passage of food to the intestine, and babies grow up in the most normal successful way.

After returning home from the surgery, it is best to contact your doctor immediately if your baby shows signs of:

Pyloric stenosis is a rare and frightful condition at first sight, but it can be effectively and permanently treated with surgery. It doesn’t cause any side effects on your infant, and your baby can grow up healthy and fine and function normally later in life, without any problems.

Ultrasound Scan at 13 Weeks of Pregnancy

Why you Too Need a Low Salt Diet