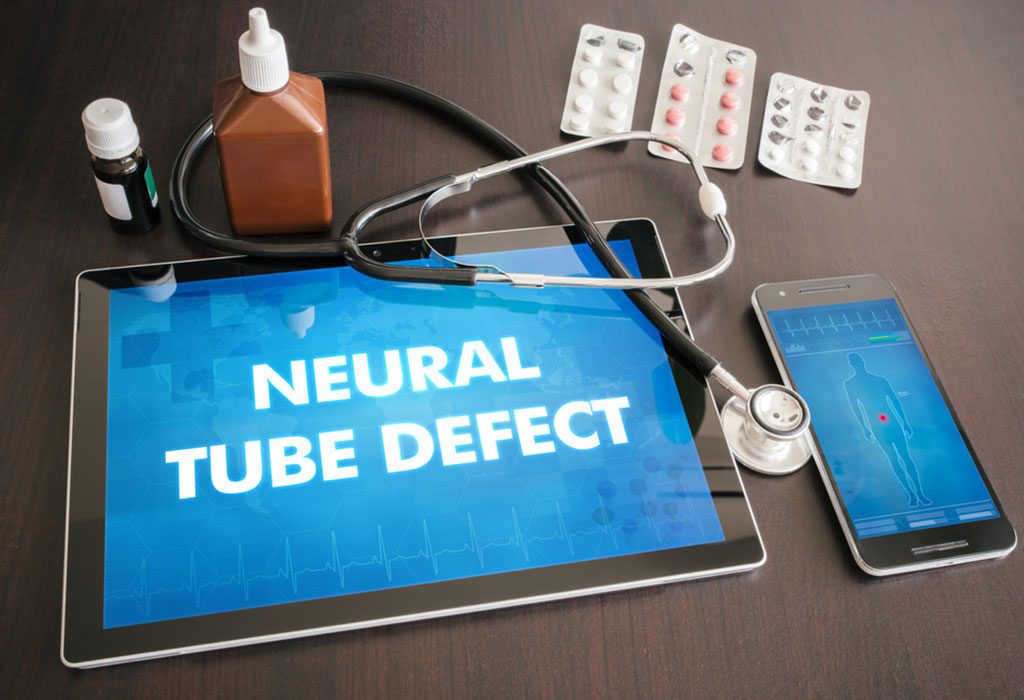 During the early stages of pregnancy, the core structure that develops into the baby’s spinal cord and brain are formed. Due to some deficiencies and genetic factors, some foetuses develop these structures with some abnormality. These abnormalities stay and get magnified as defects in the brain or spinal cord. These malformations are collectively called neural tube defects (NTD). This article discusses the various aspects of this birth defect, and the precautions that expecting mothers can take to deliver a healthy baby.

What Are Neural Tube Defects?

Neural tube defects are birth defects that are characterized by abnormalities in the spine or brain of the developing foetus. It is one of the most common forms of birth defects in babies worldwide. These defects occur during the first month of the pregnancy, and are detected in the first trimester itself.

What Is a Neural Tube?

The neural tube is a flat and tiny ribbon-shaped structure that develops inside an embryo within the first few weeks of its formation. It is this primitive structure that gives rise to the brain and the spinal cord in a fully developed baby. As this structure forms the basis of the vital organs, an abnormality in its development or differentiation results in a group of defects termed as neural tube defects. In the open type neural defect, the brain and the spinal cord are seen outside the skull or the vertebral column. Meningitis is commonly found to be associated with this type of defect. The open type includes conditions like spina bifida, encephaloceles, iniencephaly, and schizencephaly, hydranencephaly, and anencephaly.

Spina bifida is a very common type of neural tube defect that is caused when the lower part of the spinal cord protrudes out of the body. It is usually associated with damaged nerves in that region. Children with spina bifida are likely to have paralysis of the extremities, especially the leg, and poor control of urine and stool.

There are three sub-types of spina bifida, namely, spina bifida occulta, meningocele, and myelomeningocele. Spina bifida occulta is the mildest form of spina bifida, where there is a small space in the spinal cord that does not have any implications on the brain or spinal cord. Meningocele is a condition that refers to a small protrusion of the meninges in the back. Myelomeningocele is a very severe form of the neural tube defect that involves the protrusion of a small portion of the spinal cord and the surrounding tissue. It is characterised by intellectual disability caused by fluid accumulation in the brain, and complete or partial paralysis of the leg.

Anencephaly is the abnormality of the neural tube in the upper end, causing children to be born without a portion of the brain and the skull. The remaining part of the brain is very cluttered and disorganised. Children with anencephaly are usually still born or do not survive for more than a few weeks of birth.

During the formation of brain in the embryo, when the neural tube does not close properly, leaving a sac-like protrusion of the brain and its membrane, it is termed as encephalocele. This condition is relatively rare, and is almost always accompanied by developmental disabilities, paralysis of the upper and lower extremities, seizures, hydrocephalus, ataxia, abnormalities of the face and head, and problems wit vision. Some children who have encephalocele survive to have normal intelligence.

Iniencephaly is a rare form of a neural tube defect that is characterised by exceptionally large heads that are tilted backwards. It is also often associated with absence of neck, distorted spine, defective spinal cord, and cleft lip. Babies born with this disorder do not survive for long after birth.

This is a condition where a mass of fat tissue under the skin tethers itself to the back bone, preventing it from growing. It is visible as a large lump, and is often associated with poor bladder and bowel control, and weakness in the legs.

Lipomeningocele is a condition where a small portion of the spinal cord protrudes out under the skin, and gets attached to the tissues in the back. The protrusion affects the nerves radiating from that part of the spinal cord, giving raise to neurological defects.

The causes of neural tube defects can be one of the following:

Neural tube defects are caused due to certain mutations in genes encoding the enzyme Methylenetetrahydrofolate reductase (MTHFR). These variations can increase the likelihood of a child being born with neural defects. A family history of tube defects also increases the chances greatly.

Folic acid, or Vitamin B9, is an absolutely vital nutrient for the proper formation of the neural tube. Expecting mothers who have a deficiency of folic acid have a higher chance of giving birth to a baby with neural tube defects. Folate plays an important role in the methylation process of the cytoskeleton, as part of the post-translational modifications. These post translational modifications are vital in giving functionality to the proteins.

If the mother has uncontrolled gestational diabetes, there are high chances for the baby to have NTD. Maternal diabetes particularly affects the gene set responsible for neural tube defects.

Obesity in the expecting mother is found to be a risk factor for the occurrence of neural tube defects.

Certain medicines, particularly those that are taken to control seizures, have an adverse effect of the organ formation and development of the foetus. Anti-epileptic drugs like carbamazepine and Valproate show increased risk of causing neural tube defects.

Primary or secondary exposure to smoking increases the chances of the mother delivering a baby with NTD. The chemicals in the cigarette are likely to hamper the folate-mediated methylation process.

Most children born with neural tube defects show one or more of the following symptoms:

Some children with severe cases of NTD may fail to survive, while some others survive to have normal intelligence. The symptoms can vary hugely, depending on the severity of the defect.

How to Detect Neural Tube Defects

Neural tube defects are usually detected when the baby is inside the uterus, or soon after it is born. During pregnancy, a neural tube defect can be clearly identified through a simple ultrasound scan, as early as 19 weeks. An anomaly scan done during this time of the pregnancy captures any signs of spina bifida in the foetus.

A blood test, called triple screen test and done between 14 to 20 weeks of pregnancy, checks for levels of alpha-fetoprotein (AFP). An elevated level of this protein is indicative of a higher risk of neural tube defects. When elevated levels of AFP are identified, the doctor recommends an amniocentesis to confirm the diagnosis of NTD. Amniocentesis is a process of drawing small portions of the amniotic fluid surrounding the foetus, to check for various proteins. If the AFP is found to be elevated in this sample, the diagnosis is confirmed.

Early detection of neural tube defects can be very helpful in effectively managing it after the baby is born. Some of the benefits of early detection are:

Many of these complications can be overcome through surgery or medications.

Who Is at Maximum Risk of Having a Baby with NTD?

Parents who have already had a child with neural defects, or have close relatives who have children with NTD, have a high risk of having a baby with neural tube defects.

Depending on the complications associated with NTD, the choice of treatment is made. Severe and fatal forms of NTD like anencephaly or iniencephaly usually do not have any treatment. Other, milder forms can be corrected with some of the available treatment options, such as:

One of the most effective measures of preventing NTD is to ensure a good intake of folic acid. While planning for a pregnancy, women can start taking supplements of folic acid in advance, in order to build up enough reserve in the body. The recommended dosage is 400 micrograms per day. Additionally, consuming a diet rich in folic acid can go a long way in preventing NTD in babies.

Can You Get Folic Acid from Food?

Folic acid is available readily in foods, and consuming it regularly before and during pregnancy can be helpful in preventing neural tube defects in the baby. Some of the foods rich in folic acid are:

Neural tube defects are one of the more common types of birth defects, affecting hundreds of thousands of children around the world. Proper dietary habits, such as eating foods rich in folic acid, and maintaining a healthy lifestyle, can greatly help in preventing the occurrence of NTD.

Previous article « Placenta Encapsulation – How is it Done, Benefits and Risks
Next article Conduct Disorder In Children- Causes, Symptoms And Treatment »