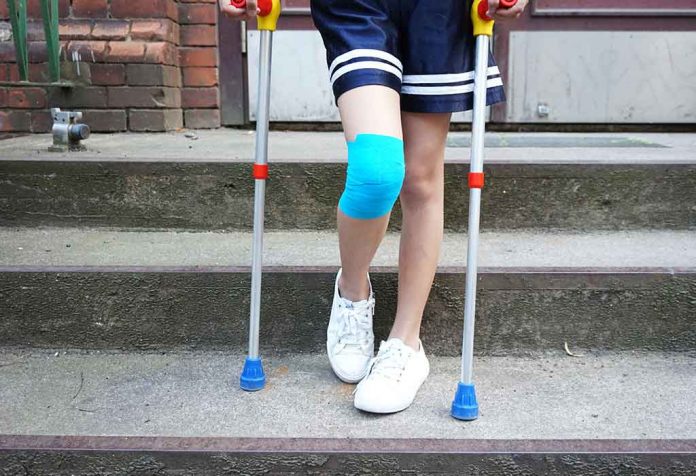 A child who suffered a foot, leg, or ankle injury can recover quickly by reducing the weight exerted on the injured foot or leg while walking or standing. Crutches are the best means to help the child to do so. They can assist the child in standing or moving around without placing much weight on the injured leg. However, the child should first learn how to use crutches properly. Not knowing the proper crutch usage technique can make him lose balance and fall. Along with the doctor, the parents can also teach the child how to stand and walk with crutches, allowing him to move while still recovering.

What Is Crutch Walking?

A crutch is an aid designed to ease the mobility of a person who is unable to support his weight on one or both legs. It is ideal for usage by the one who has injured his foot or leg or undergone leg surgery. A crutch can aid mobility and allow the child to shift the lower body weight to the upper body. Such mobility with the aid of crutches is termed crutch walking. Crutch walking is not restricted to people suffering from a lower-body injury. Doctors also advise it for children who have an orthopaedic disorder.

Need and Importance of Crutches for Kids

Physicians prescribe crutches for children who have had bone fractures, leg injury, or orthopaedic problems, such as dysplasia, musculoskeletal infections, or development dislocation of the hip. Crutches provide the ideal therapeutic support required by the child during his healing process. They take away the weight from the injured leg or foot and transfer it to the upper body. Crutches enable the child to move more easily and recover properly. They are important for the child to recover from lower-body injury or orthopaedic issues.

When Can a Child Walk With Crutches?

A child can start using the crutches when the doctor prescribes to use them for medical issues, such as a leg injury or musculoskeletal problem. The beginning of the treatment begins with the use of crutches, which, as mentioned earlier, act as a mobility aid to ease movement and transfer the lower body weight to the upper body. To start walking using a crutch, the child will be first fitted for a proper crutch which is ideal for his height. Then, the child and the parents will receive training or instructions on how to use the crutch.

Children’s crutches are of many types, and the doctor will decide which one to prescribe based on the diagnosis of the injury.

This type keeps the bad or injured leg off the ground at all times.

In this type, the injured foot or the leg may be set on the floor but without placing any weight on it.

This type allows the child to place a small amount of weight on the foot of the injured leg.

This type allows a patient to put weight on the injured leg as much as they can tolerate or are comfortable with.

Tips for Children to Walk Safely With Crutches

For children to walk safely with crutches, the parents need to ensure that they learn how to properly use the crutches. First, they need to adjust the crutches and then learn how to walk, sit, stand or get down the stairs using crutches. Let’s take a look at each step.

The pediatric forearm crutches need to fit the child perfectly. The crutches can be adjusted by doing the following:

How to Sit and Stand Up With Crutches

How to Walk With Crutches

With partial weight-bearing crutches, your child, to balance, can touch the ground with his bad foot. To walk, the child needs to:

With no weight-bearing crutches, the child cannot put any pressure on the injured leg or feet. The child uses his arms, hands, good foot and crutches to move forward. To walk, the child needs to:

How to Climb Up the Stairs With Crutches

Climbing stairs is the trickiest part of using crutches. The child can do so by following these steps:

How to Climb Down the Stairs With Crutches

To come down the stairs, the child needs to:

Things to Remember While Using Crutches

Crutches should be used carefully. Parents and children should take care of the following points while using crutches:

Crutches help assist kids and adults in moving around and recovering from a leg or foot injury. To teach children how to use crutches to stand and walk, parents must first learn the proper usage and then teach their kids. In case your child is not able to coordinate well enough with the crutches, consult a physician.

These 7 Breakfast Foods Are The Secret To Mommy Karisma Kapoor’s Fitness!

Fairytales, Folktales and Fables- The Difference