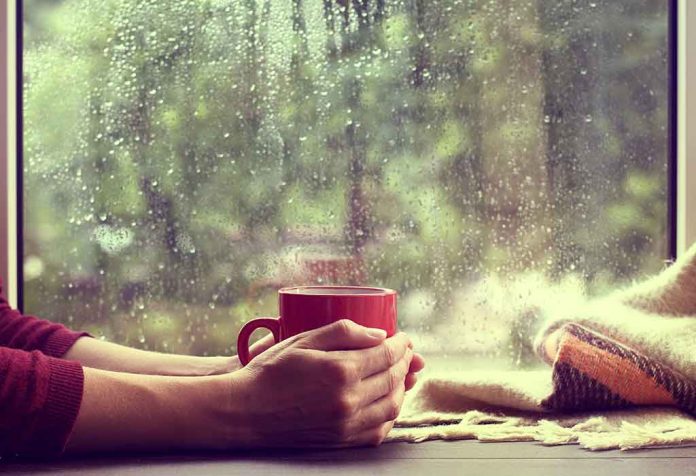 It was drizzling since morning. Sabita had just finished her daily chores and had taken resting in the afternoon when she heard the increase of the downpour. She looked from the window; the rain had increased and so did its sound. She had always enjoyed watching the rainfall from the window. There was a quiet smile on her face. Then she had the urge of eating pakoras. She looked at the clock; it was almost 5 in the evening. She thought to herself, “if I start preparing the pakoras now, they will be ready by the time my son and her husband are back home.
She started cutting vegetables and started to prepare the mixture for the pakoras. She kept the kadhai on the stove and put the flame on. Now she started to fry the first batch of pakoras looking at the clock. It was almost 5:30 pm and her son was not home. She checked her phone but there was no message nor any missed call. Her first batch of pakoras was ready.  She tasted one, and it was perfect for such a rainy day. She put the flame to a simmer and called her son. He had been to his friend’s house. “Hello maa!”  came the voice from the other side. “Hello, when are you coming home? It’s raining and getting darker” exclaimed Sabita. “I have made pakoras for you.”
“Oh! Maa. We are having a group study to complete this science project. I want to stay at Rahul’s place only. I will have those pakoras tomorrow. And it’s raining very heavily right now”- said Pravin and he kept the phone.
Sabita was disheartened. How she had wished to see the delight on the face of her drenched son after seeing the hot pakoras. She took a long sigh and continued with the next batch. She thought she would complete it by the time her husband would be back and can have a nice tea time with the hot pakoras. Her phone rang, she was frying her last batch now, it was her husband calling.
“Hello” said Sabita keeping the phone on loudspeaker. “Hello!” said her husband “Listen, don’t prepare dinner for me. I have a meeting today and will be late. Dinner will be arranged here itself.” She took a long breath and said “Okay” and ended the call even though she wanted so much to tell him to come home early and say “let’s have some hot pakoras together.”
She finished making the pakoras and looked at them for a while not knowing what to do next. Then she made a cup of masala tea for herself. She took the cup of tea in one hand and the bowl of pakoras in the other and sat on the sofa near the window pane and gazed at the rain. It took her back to memory lane back to the days of her childhood. When her mother used to make pakoras for her and her siblings so that they would remain inside during the rain. How they used to savour the pakoras and fight over the last piece. Then beautifully her mother would break it into equal pieces to end their fight. For Sabita, pakora was not just a tea-time snack, but it was the joy of the rainy season.
Disclaimer: The views, opinions and positions (including content in any form) expressed within this post are those of the author alone. The accuracy, completeness and validity of any statements made within this article are not guaranteed. We accept no liability for any errors, omissions or representations. The responsibility for intellectual property rights of this content rests with the author and any liability with regards to infringement of intellectual property rights remains with him/her.

It’s a Girl! My Experience With My First Baby

It’s Hard Being a Parent for the First Time, Yet It’s a Lovely Journey

How to Heal After a Miscarriage

Ruchelle Fernandes - August 3, 2021
You may handpick your Christmas trees every year or just go with the one that seems to stand out amongst the lot. But the...