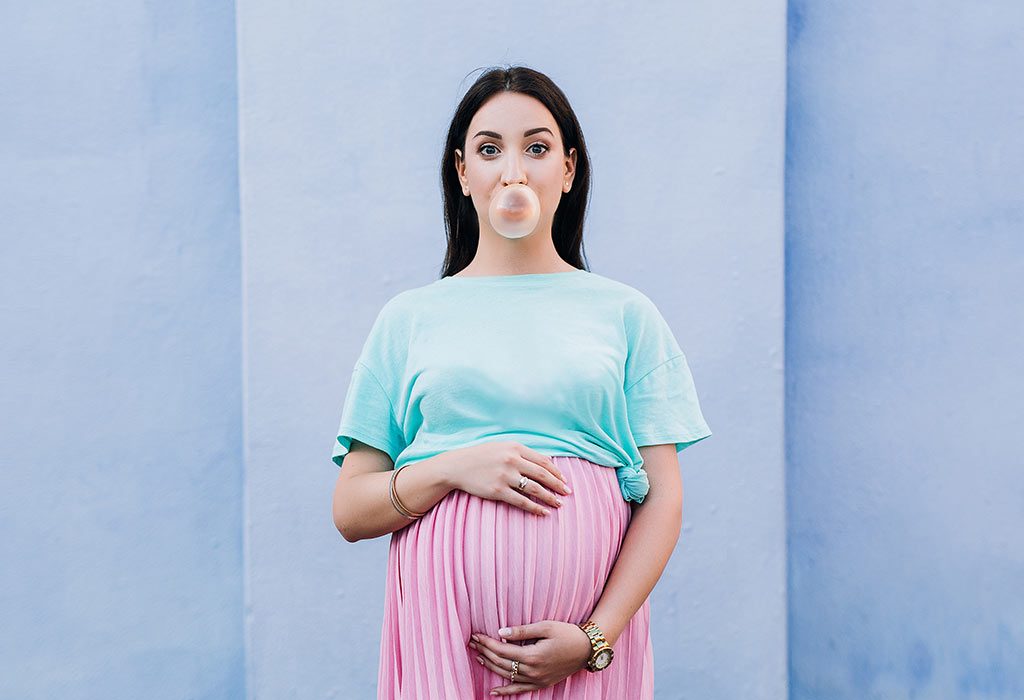 Chewing gum is so common that many people wouldn’t think twice before buying a packet. It can be used as a mouth freshener, or simply to be more alert. Many pregnant women have found that chewing on flavoured gum also helps in reducing morning nausea, which is common. However, chewing gum is not a natural food item after all. It has various artificial flavours and substances, which is why it is important to know how safe or unsafe it might be for your baby.

Can You Chew Gum During Pregnancy?

On a general note, chewing gum once in a while is generally safe, as long as your pregnancy is free from complications or there is no chance of a risky delivery. If you are on a specific diet that keeps your calorie intake under control or sugar-levels at a minimum, the amount of gum might have to be reduced further.

What Is Chewing Gum Made of?

Chewing gum is manufactured artificially, which makes it evident that it will contain various chemicals and synthetic ingredients. The variety of flavours are created artificially, the colours are artificial as well, and the major constituents of the taste come from chemical sweetening agents or even corn syrup. These might seem completely unfit for a baby, but an occasional gum doesn’t seem to cause much harm.

Benefits of Chewing Gum While Pregnant

If you are pregnant, you can expect the following benefits from chewing gum. While there are benefits, chewing gum during pregnancy also comes with its own caveats.

What Chewing Gums Are Safe for Pregnant Women?

Here are some chewing gums that are deemed safe during pregnancy.

1. Gums with xylitol as a constituent

Many popular brands contain an alcohol-molecule of a sugar termed as xylitol. If this is the core component, then the gum is safe for pregnant women in decent amounts.

2. Gums with aspartame as a sweetener

Aspartame is a sweetener used in many chewing gums, although it doesn’t provide any nutrition since it is artificial. Only in cases where the mother has PKU are such chewing gums highly advised against. This is primarily due to the body’s inability in breaking down phenylalanine, present in the aspartame, which causes it to be stored in the body and start affecting the baby adversely.

3. Gums that have sucralose as a sweetener

Just like aspartame, sucralose is another artificial sweetening agent that contains no calories and is found in many chewing gum brands. It is beneficial since it doesn’t affect the sugar levels in the blood and maintains health as it is.

4. Gums containing nicotine as a constituent

Though these are never recommended as recreational chewing gums, they are used by mothers to counter their need for smoking. Although it might help increase the weight of the baby, the presence of nicotine should always be kept to a minimal. Chewing Gums Which Are Unsafe During Pregnancy

The following chewing gums should not be chewed if you are pregnant.

1. Gums with saccharine as a constituent

There have been many controversies around this ingredient since many food organisations deem it safe, but actual results have produced exceptions. Even though found in many food items and drinks, once inside the body, saccharine can very easily reach the foetus via the placenta, and could possibly harm the growth of the child.

2. Gums with sorbitol present in them

Sorbitol does have sweetening properties, but those are accompanied by its nature as a laxative. Consuming such chewing gums could even cause diarrhoea and other intestinal issues. At times, it is known to absorb nutrients and prevent them from reaching the foetus, too.

When Should You Completely Avoid Chewing Gum?

If you can identify with the following, you should not be chewing gum at all. Precautions Pregnant Women Should Keep in Mind While Chewing Gum

The following precautionary measures are recommended for pregnant women before and after chewing gum.

On a basic level, it is best to stay away from chewing gum when you are pregnant. For mothers that find the benefit in the reduction of morning sickness, the same can be obtained by making use of other techniques and natural fragrances that are much safer and resolve the issue without complications.

Previous article « 10 Healthy and Delicious Fruit Salad Recipes for Kids
Next article Eating Eggs During Breastfeeding – Is It Safe? »