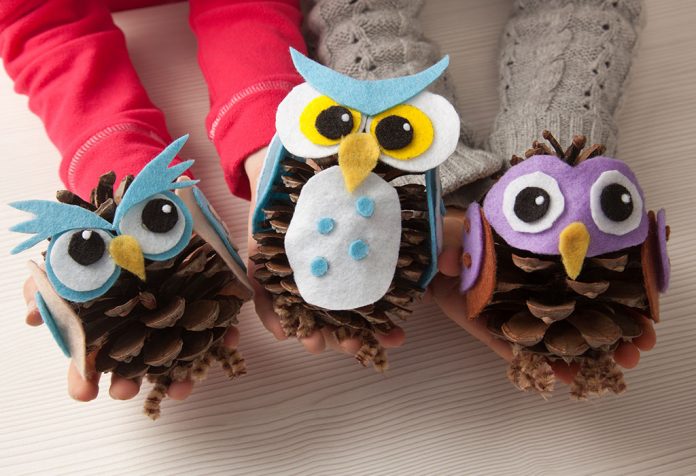 Kids can be very demanding. Having a pet of their own might be one of those rants that plague you most of the times. On the other hand, many children want a new toy or a different activity that doesn’t seem repetitive. No matter how old your kids are, a simple visit to the zoo would be enough to show you their interest in different animals and the way they observe the uniqueness of each one of them. While visiting the zoo may not always be a possibility, you can interestingly bring the zoo home. Making a zoo with wild and pet animals is quite simple once you gather a few items to make craft models of these animals.

To stoke the creative imagination of children who are used to seeing wild animals on television or other cartoon shows, we have put together a bunch of wild animals crafts for preschoolers that are simple to make and can turn out to be your little one’s favourite toy.

A bear is a good animal, to begin with since most kids would be aware of the shape if you have a teddy bear at home.

If your child is scared of the rubbery snake toys in the market, this craft idea is just what you need! This cute little snake will make him feel more comfortable and he might end up having fun with this craft item. An elephant is usually the first wild animal that kids tend to fall in love with almost instantly.

4. A Pair Of Crocodiles

Your kid might find crocodiles quite intriguing since their structure is exceptionally unique. Allow him to make a pair of his own.

For the kids, yearning to have pets at home or falling in love with domestic animals in villages, these farm animal crafts for preschoolers would be quite a delight.

The poem might be a tad different, but this little white coloured sheep will be a great craft item for your little one. One of the simplest craft items to make, which can become a treasured memento for your little one.

Real dogs might be fluffy and soft but you might not want to handle a pet right now, but you can surely let them have a toy dog though.

While pigs might seem disgusting to us, a tiny baby pig seen in farms might make your little one squeal with delight.

Seeing the tiny little chicks run around in pen can make your child want one for himself, too. Sea animals would end up being the rarest to be observed, apart from the usual fishes. If your child has loved any sea-based nature shows, indulge his imagination with these crazy craft items for creating sea animals.

While these creatures might disgust kids, this craft item definitely will not.

Spotting a starfish on the beach is quite exciting for kids, especially since the shape is something they can instantly recognise.

Once your child starts getting used to creating different craft items, you can start introducing him to more complicated ones, such as mythical creatures, birds, and many others. Keeping their creative juices flowing is not as difficult as it seems, and giving your children the right tools will help them discover their own world by themselves.

Using some old household items is the quickest way to form a simple fish that still manages to grab your attention. As your child tries these easy animal crafts, his creative and problem-solving skills will develop. If your child’s strong point is ‘logic’, he will have a great time trying out these craft activities. But you need to work on his other skills as well. With FirstCry Intellikit, a learning program based on the theory of multiple intelligence, you can assist in his overall development with a fun approach!

Make your Home Double Up as a Cool Teen Hangout

Check These Things Before Finalising a Daycare for Your Infant