Home Pregnancy Prenatal Care Getting a Positive Pregnancy Test After a Miscarriage – Is It Normal? 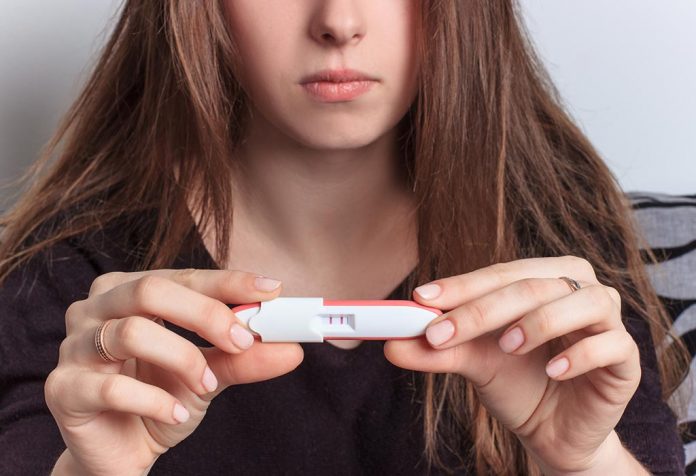 Of the millions of pregnancies that end in miscarriages every year, less than twenty per cent are actual pregnancies, whereas the others are known as chemical pregnancies. This means that the pregnancy was terminated before it was detected or confirmed. However, sometimes after a miscarriage, women might continue to have pregnancy symptoms such as morning sickness. In this case, they might be convinced to take a pregnancy test. This article will explain what it means if you get a positive pregnancy test after going through a miscarriage.

Can a Pregnancy Test Show a Positive Result After a Miscarriage?

As strange as it sounds, a positive pregnancy test is actually possible after a miscarriage. However, in almost all cases, this is a false-positive result.

Here are some of the common causes of a false-positive test after the loss of pregnancy.

hCG is continuously produced by the placenta during pregnancy and is responsible for maintaining the early development of the foetus. However, since miscarriages are usually sudden, the shock to the system requires some time to reset. During this period, hCG might still be produced and can result in a positive pregnancy test.

In some cases, miscarriages may be incomplete. That is, a fragment of the ovum might still be in the uterus. This scenario may also lead to a false-positive result. A positive pregnancy test 8 weeks after miscarriage indicates that it was incomplete.

Other Possible Causes of Getting a Positive Test After a Miscarriage

Some other reasons why you would get a positive test after a miscarriage are as follows:

What to Do If a Pregnancy Test is Positive After a Miscarriage?

Ideally, you should cross-check by taking the pregnancy test using strips from different companies. Next, you can ask your doctor for a blood test, which measures the absence or presence of the hCG hormone in your body, and also the current level it is at. This test should be performed approximately two weeks after the miscarriage. In very rare situations, a pregnancy test still positive after a miscarriage could mean that you had a multiple pregnancy, where only one embryo was miscarried, but the other is still alive.

1. What Does a Positive Pregnancy Test 12 Weeks After Miscarriage Mean?

A positive pregnancy test around 12 weeks after a miscarriage is almost certainly because you are pregnant again. However, this only applies if you are sexually active and aiming to conceive.

2. How Long Will a Pregnancy Test Be Positive After a Miscarriage?

The standard operating principle of a pregnancy strip is visual. Once you have urinated on it, the appearance of one line means you are not pregnant, while two lines mean you are. Since modern pregnancy strips are very accurate, they can show a positive result even weeks after a miscarriage due to the minuscule amounts of hCG circulating in the body. 3. When Can You Get Pregnant After Having a Miscarriage?

If pregnancy tests show a positive result consistently after you have undergone a miscarriage, the best thing to do is seek your doctor’s recommendation. In most cases, this is a false positive test and will have no complications. However, as explained in the article, there are some rare possibilities that can have a severe impact on your health. Getting a thorough examination is essential. Further, if you observe continuous bleeding, vaginal discharge, fever or pelvic aches, consult your doctor, as this might indicate an infection.

Also Read: Positive Pregnancy Test But No Symptoms- Is it Possible?

In The Quest for the Perfect Bra

Top 12 Songs That Kids Will Love Dancing To