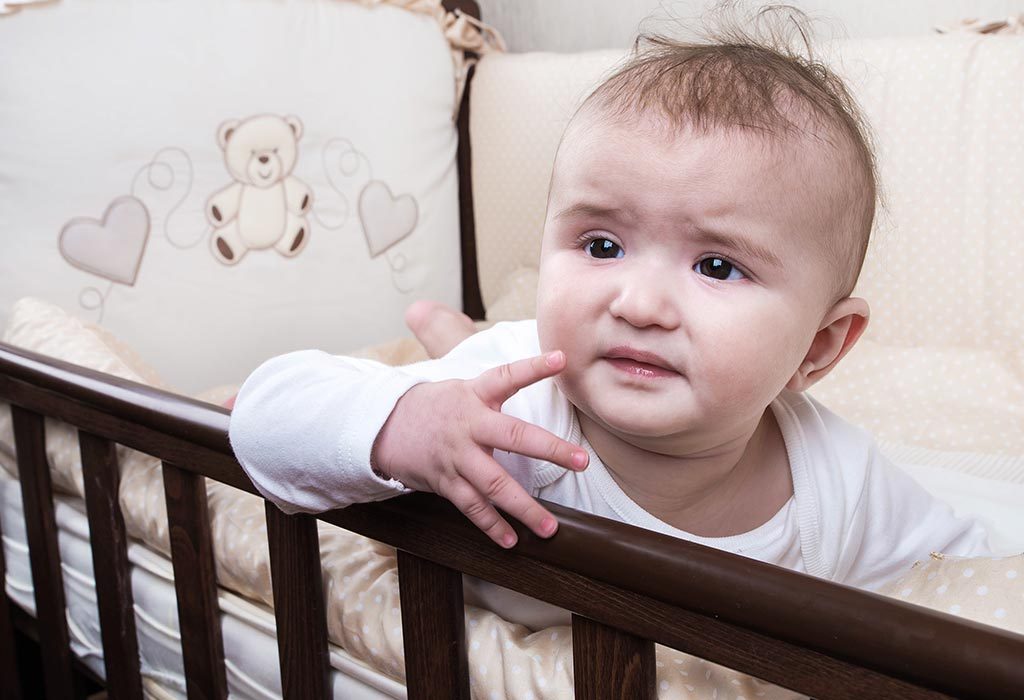 Being the parent of a newborn, you start appreciating sleep more than ever. It almost feels like a luxury. Babies often throw tantrums during sleep time, and some even have a hard time falling back asleep when they wake up in the middle of the night. You may have heard of white noise, which helps in making a baby fall asleep. Read further for everything you need to know how to get your child to sleep on white noise.

Video : Is It Safe to Use White Noise for Baby Sleep?

What is White Noise?

White noise is the sound you hear when all the audible frequencies of sound are played at the same time at the same volume. A good example is the sound of waves and the ocean breeze when you stand on a cliff. Other examples include the constant tone of a ceiling fan, the buzzing of a washing machine or vacuum cleaner and the sound of the rain. Because white noise contains all the frequencies of sound, it can be used to mask or drown out any other sound. For example, if you’re in your room and you hear the sound of vehicles from outside, turning on the fan drowns out the noise of the vehicles and it feels quieter.

Is White Noise Safe for Babies?

White noise can be safely used to put babies to sleep provided it meets certain safety criteria. The sound machine shouldn’t exceed 50 decibels in its output, and the machine shouldn’t be used all the time. There are some concerns as shown by one study that when babies are exposed to white noise for very long periods of time, they tend to have developmental delays in speech and hearing. However, it should be noted that according to the same study, living in a noisy environment also has the same effect on babies. The key is to let them hear other sounds that are clear such as speech, so their auditory system doesn’t process sound information in fuzzy ways.

Why is White Noise Used for Babies?

Below are some of the reasons why white noise is used:

The stimulus babies receive on a daily basis can stress them out often as they are overwhelmed by all the lights, new faces, sounds and sensations. White noise gives them a sense of safe space by blocking out external sounds that are disturbing.

White noise works as an effective sleep association for babies. Sleep association helps babies fall asleep faster and can include bedroom, darkness, crib, a favourite blanket or a toy, rocking, pacifier, nursing etc. White noise also helps them fall back asleep after sleep arousal that occurs every 20-45 minutes during their sleep. The shushing sound that you use to calm down a crying baby is actually white noise. It is similar to the whooshing noise made by blood flowing through the arteries around the uterus. Using the shushing static noise of radio can also calm down babies as they sound similar.

One recent study shows that a running fan in the room significantly lowered the risk of SIDS in babies. The two strong contending reasons being that fan circulates the air well and also generates white noise. It is known that white noise reduces active sleep in babies which is the same sleep state when most of the SIDS is known to occur.

White noise not only soothes your baby to sleep but parents are also known to sleep better with it. As babies often wake up from sleep every night, the parents also have a hard time falling asleep in between. White noise comes to their rescue and helps them fall asleep sooner.

Parents who are wondering when to stop using white noise for baby, they’d be glad to know that it can be done after the first year of the birth. By now they won’t be fussy sleepers, and white noise can be gradually reduced over the months and used only for a few minutes until they fall asleep or wake up in between.

How Can You Use White Noise for Baby Sleep?

White noise is effective because babies are already exposed to something similar in the womb. The mother’s body is active with the sound of rushing blood through arteries and veins, the rhythmic beating of the heart, and the sound of bowel movement. All of this contributes to a white noise of its own to which babies are constantly exposed to. Hence playing white noise can help soothe babies to sleep. Here is how you can help your child:

Are There Any Disadvantages of White Noise for Infants?

There are certain disadvantages of white noise. Know how it can affect an infant:

Below are some of the common questions that often are in the minds of parents. Know what are they:

1. How Loud Should White Noise Be?

White noise for babies should not exceed 50 decibels.

2. Where Can I Find White Noise?

There are numerous sources of white noise such as a running a fan, radio static, and white noise app on phones.

3. Which Is the Best Type of White Noise?

The best white noise for baby is a source of sound that is constant and soft such as a running fan or any soothing noise app on mobile phones.

Getting your baby to sleep at night can be a tough feat. However, there are effective ways to overcome this issue and get some much-needed sleep, without any disturbance. When used within the recommended parameters, white noise is a safe and effective way to help babies sleep.

Also Read: Cry it Out Method for Baby Sleep Training

Previous article « 5 Creative Ice-Cream or Popsicle Stick Crafts for Kids
Next article Watermelon During Pregnancy – Is It Safe to Eat? »