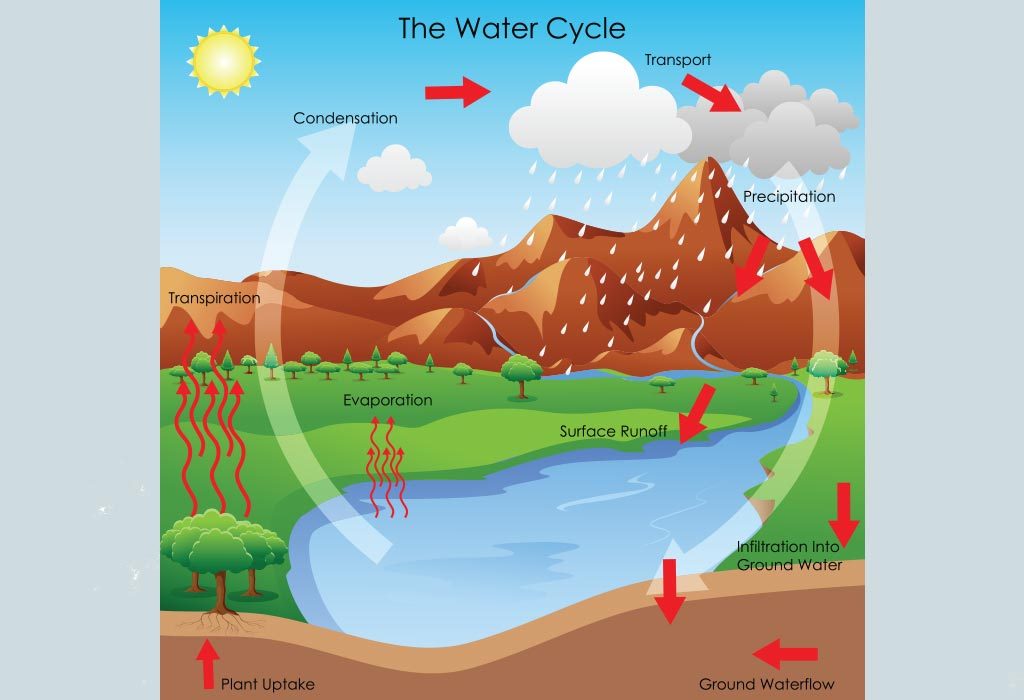 The water cycle is an environmental phenomenon that consists of three processes, evaporation, condensation, and precipitation. Kids are taught about the water cycle phenomenon in school. But if your kid is inquisitive and asks you different questions about water cycle or different forms of water, we have all the information you need to explain him in the simplest way possible. So, get familiar with the topic and explain your child.

What is the Water Cycle?

The water from the various water bodies on the earth gets evaporated because of the Sun’s heat. The water in the form of vapours then cools down at a certain height and condenses to form clouds. The water keeps condensing to form clouds, but when too much water gets accumulated, the clouds become heavy and then the water falls from the sky in the form of rain, snow, or hail. The water then gets collected in oceans, lakes, or ponds. In due course, this water again gets evaporated initiating the whole cycle over and over.

What are the Steps Involved in Water Cycle?

In this process, the heat from the Sun causes the water present on the Earth (seas, oceans, rivers, ponds and lakes) to evaporate in the form of vapours and rise up to the sky. The water vapours then accumulate to form clouds.

When these water vapours cool down sufficiently, they turn into the liquid state again. The procedure of converting from a gaseous form into liquid is called condensation.

Precipitation takes place when water vapours condense to turn into tiny water drops, which falls from the sky in the form of rain, sleet, snow, or hail.

The water falling from the sky due to precipitation gathers in different water bodies like oceans, seas, rivers, lakes and so on. The water then evaporates again and the cycle continues.

Other Interesting Facts About the Water Cycle

Some interesting facts about the water cycle for kids are as follows:

Teaching the process of the water cycle to kids is important to make them understand the different environmental phenomenon. It may also make them realise the importance of saving water.