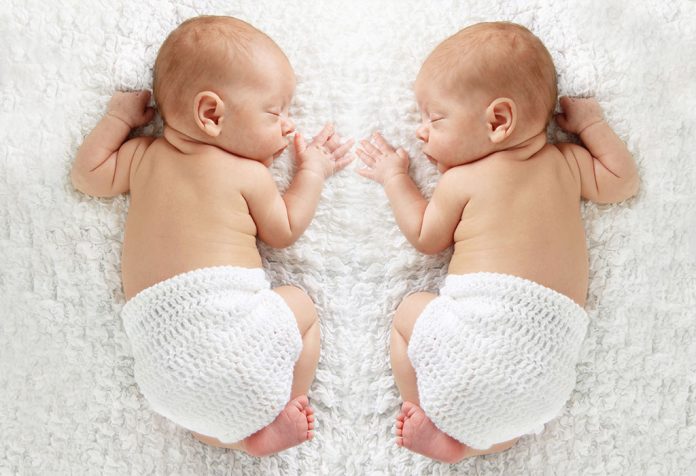 Twins are two babies who are conceived and growing in the uterus of one mother, and are usually born on the same day, although not necessary. Since the womb of a mother is usually limited in size, it is very likely that multiple and twin pregnancies are not always carried to full term. Modern procedures of artificial insemination have increased the chances of conceiving twins. However, not all twins look completely alike and there can be different types of twins depending on the nature of their conception. If you are wondering about how many types of twins there are on record, here’s a breakup.

What Are the Different Types of Twins?

The two types of twins that are widely known are fraternal twins and identical twins. Fraternal twins are created when two different eggs are fertilised by separate sperms. These twins do not look completely alike and are more likely to be a boy and girl pair.
Identical twins are created when a single fertilised egg creates a zygote that splits up to form two different embryos. These twins have distinctly similar features and are usually of the same sex.

Fraternal twins are the result of hyper-ovulation by the mother. This means that the mother, due to genetics or fertility treatment procedures, may release more than one egg, which gets fertilised by two separate sperms. These twins each have their own placenta and an amniotic sac. However, when the eggs fertilise, it is possible for the placentas to fuse together due to their proximity, which causes them to be mistaken for identical twins. Fraternal twins do not completely resemble one another, although there may be striking similarities.

There are different types of twin babies in the fraternal twin category.
1. Sororal Twins: A girl and girl pairing of fraternal twins are called sororal twins. This pairing is very rare.
2. Superfetation: Superfetation is when an egg is released and fertilised while the mother is already pregnant. Here, twins are conceived at different times.
3. Heteropaternal Superfecundation: If a woman releases more than one egg during ovulation, it is possible for two eggs to get fertilised by different men. This can result in the twins having different fathers.
4. Tetragametic Chimerism: When one of the zygotes out of the set of fraternal twins is absorbed into the other, resulting in a singular zygote, there will be one baby with two different strains of DNA.

Identical twins are created when a single egg is fertilised by one sperm. This egg splits in two, creating two babies with the same DNA. These twins may or may not share an amniotic sac and a placenta, based on the time of the split of the egg. The twins will each have their own placenta and amniotic sac if the egg splits within the first two days. If it splits within the next three to eight days, they will have the same placenta with separate amniotic sacs. In case the egg splits after thirteen days they will share a placenta and amniotic sac, which can result in a high-risk pregnancy and cause complications to the twins. If the egg doesn’t split until much later, conjoined twins or Siamese twins are formed.
When identical twins share a placenta, something known as a twin to twin transfusion may occur, where one twin may pass on blood to the other. Here, the twin receiving the blood will have excessive red blood cells and the twin donating the blood will have a lack of it, causing complications in both the twins. The different types of identical twins are:

1. Mirror Image Twins: These twins are created when the eggs split after a week or more after conception. Here, the left part of the egg becomes one twin and the right becomes the other. They are mirror images of each other, as such that if one has a mole on the right hand, the other will have a mole on the left. It is also possible for the organs in one twin to be on the opposite side of the body.
2. Polar Body Twins: This happens when the egg splits unevenly before fertilisation. Usually, the smaller half, known as the polar body, dissolves into the mother. However, on rare occasions, it acts as a second egg which is then fertilised by a different sperm of the father. This results in twins sharing the DNA of the egg but having different DNAs from the sperms.
3. Siamese Twins or Conjoined Twins: When the egg takes longer to split and doesn’t split completely, conjoined twins attached to a particular part of the body are born.

With the use of artificial insemination procedures, the number of women having twins and multiple pregnancies is on the rise. It is surely a miracle to have two babies that look alike. However, twin pregnancies are considered to be high-risk pregnancies and proper consultation with an experienced doctor is recommended.

Also Read: Twins Delivery – All You Must Know

10 Delicious Eid Recipes You Should Try Out