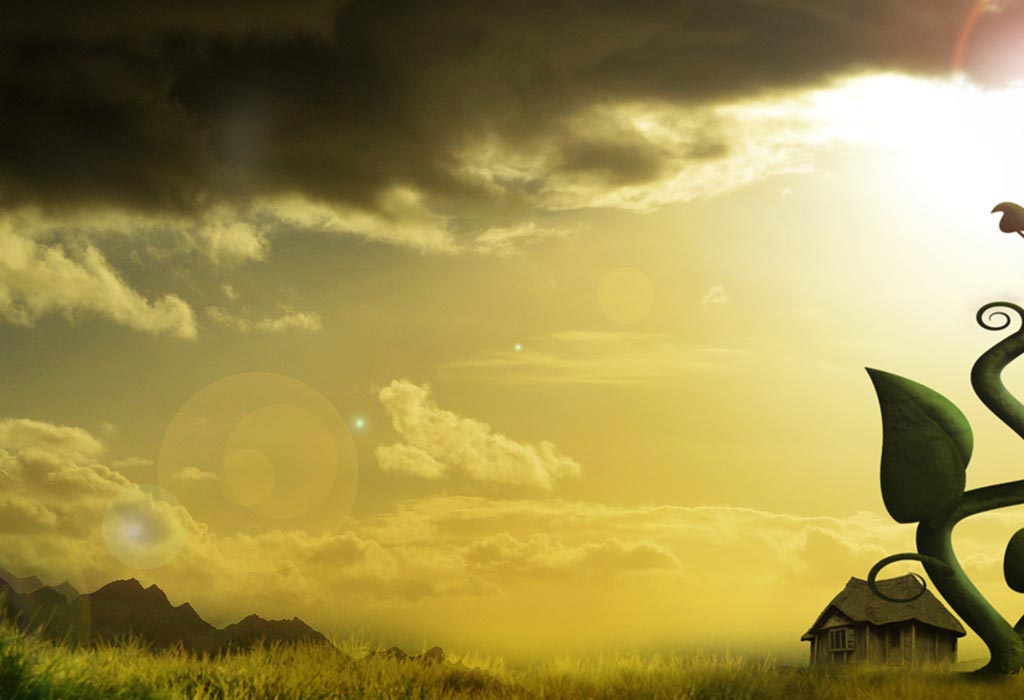 One of the world’s best-loved English fairy tales, Jack and the Beanstalk bedtime story, originated more than five millennia ago. It has a fascinating plot and a great cast of characters that have entertained children all around the globe over the past few generations. This story first appeared as The Story of Jack Sprigging and the Enchanted Bean in 1734 with featured illustrations done by Arthur Rackham. It is the most popular of the “Jack tales”, which was a series of stories featuring the archetypal Cornish English hero and main character Jack. According to researchers of Durham University and Universidade Nova de Lisboa, the story was based as an archaic story form which is now classified by folklorists as The Boy Who Stole the Ogre’s Treasure.

Short Story of Jack and the Beanstalk for Children

Once upon a time, a young boy named Jack lived with his widow mother in a small cottage out in the country. They worked very hard, weeding the garden, chopping wood, milking their cow Bess, but all of it was to no avail. They grew so poor that one day the poor widow sent her son to the market to sell Beans. “She’s worth 5 gold coins, mind you!” said Jack’s mother.

On his way to the market, Jack met an old man.

“Good morning, my boy! And where might you be going?” said the old man. “Good morning sir, I’m going to sell my cow in the market,” said Jack.

“And a fine cow she is! Would you exchange these beans for ‘err? They’re magic!”

When he returned home without coins and cow, Jack’s mother burst into tears. Jack showed her the beans.

His mother, furious, flung the beans out the window. The next morning, when he woke up, Jack looked out the window and saw a huge beanstalk extending beyond the clouds. “The beans were magic!” he thought in awe. Using the leaves as rungs, he climbed all the way up, until he reached a huge castle and knocked on the doors. A tall old crone answered, and ushered Jack in at once.

“You poor boy, have some vegetable stew!” said the kind giantess.

As he was eating, Jack heard the giantess’s husband, the giant.

“Fee Fi Fo Fum! I smell the blood of an Englishman!” screamed the giant.

“Don’t be silly dear, we haven’t had a human in the castle for ages!” said his wife.

Jack rushed out of the kitchen unnoticed and searched the castle. He came across a golden goose, which promptly laid a golden egg.

“If I sold it, I would definitely get 50 gold coins!” thought Jack.

Carrying the goose, Jack rushed on. He then found a golden harp and some gold coins. But as he was climbing down, he heard the giant run behind him.

After reaching the ground, Jack grabbed an axe and started hacking at the beanstalk. It fell down with a THUMP, leaving the giant to scramble back to his castle to avoid falling with it.

Thus, Jack and his mother lived happily ever after and became prosperous beyond their dreams.

Jack and the beanstalk fairy tale story in all of its variations symbolize climbing up the rungs of the social order through a short-cut. The name Jack is mostly found to be given to the smart boy in most fairy tales. Here he starts off poor but ends up being rich at the end. However, the giants are considered dumb creatures who make up for their mental shortcomings by their physical presence. The main message of the story is to make the most of the opportunities that come up in life, just as Jack decides to trade the cow for the magic beans. Read it to your child as a part of your child’s bedtime routine to foster a strong parent-child bond and relaxes children for a sound sleep.