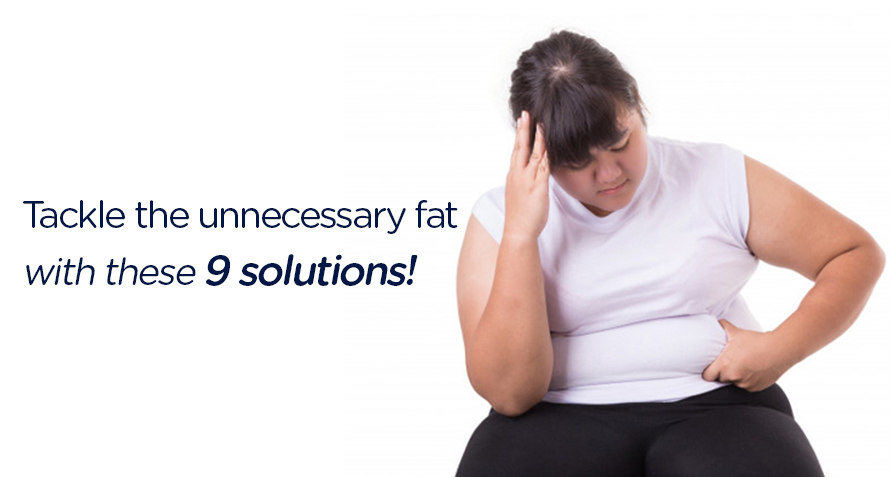 Excess fat is never welcome, no matter which area of the body it appears on or accumulates in. One such type of excess fat is FUPA. Let’s understand FUPA – what is it, what causes it, and how to get rid of it.

Excess fat is never welcome, no matter which area of the body it appears on or accumulates in. One of the common areas that are a cause of worry for many women – especially post-pregnancy – is the fat that accumulates in the upper pubic area, also known as FUPA. It is especially stubborn and can give the strongest of women nightmares! Let’s understand FUPA – what is it, what causes it, and how to get rid of it.

What is FUPA and How Does it Develop?

FUPA is an acronym for Fat Upper Pubic Area. It refers to the fat deposition that is observed in the area below the belly button and above your pubic hairline. While FUPA may not bother all people, it becomes a painful reality of post-pregnancy life for many women.

The human female body collect fat in the trunk area during pregnancy to cushion the foetus developing within. It also strengthens and nourishes the muscles in that region, preparing for childbirth. However, post-pregnancy, many women find it difficult to shed off this weight (and the overall weight they have gained in the nine months.)
If you think you’re the only one who hasn’t heard of this term before, don’t worry! FUPA is a relatively uncommon term, although the phenomenon certainly isn’t. In fact, Beyonce popularised the term in an interview with Vogue magazine where she mentioned the following about having gained weight after giving birth to her twins:
“To this day my arms, shoulders, breasts, and thighs are fuller. I have a little mommy pouch, and I’m in no rush to get rid of it. I think it’s real. Whenever I’m ready to get a six-pack, I will go into beast zone and work my ass off until I have it. But right now, my little FUPA and I feel like we are meant to be.”
The comment drew lots of praise for Beyonce, and rightfully so! The pressure to fit into pre-pregnancy clothes in a rush sure leaves a lot of new moms disheartened and discouraged, especially when they see the weight they’ve gained in unexpected places. But as Queen B has proclaimed, the weight gain is real for most women; even the ones who literally live at the gym and eat, sleep, and breathe healthy! So chin up, ladies! Embrace the changes that your body has gone through while working to produce a little miracle – and jump into committed action when you’re ready to lose your FUPA!

Apart from pregnancy, FUPA can accumulate for the following reasons in both women and men:

The distribution of fat-cells (known as adipose tissue) in the body varies from person to person, so that more fat cells in a particular area may lead to more fat accumulation there. This distribution often runs in families, contributing to a genetic factor of accumulation of FUPA.

Imagine you are at the start-line of a race… but are not running the race. Imagine being stuck at ‘get-set’ and never hearing the ‘go’ so you can release all the energy you have gathered. That is how stress acts on the body: the constant state of ‘get-set’ makes the body gather resources (food, in the form of calories, which are best stored as ‘fat’) for the anticipated race… but not actually use or spend them, leading to their accumulation. On a physiological level, stress causes a spike in the hormone cortisol, which promotes fat accumulation.

Sudden weight gain leads to fat being deposited and distributed unevenly, often leading to accumulation of FUPA. On the other hand, drastic weight loss leads to developing a pooch in your trunk area.

While we use our hands and legs everyday, we hardly ever use our trunk muscles to perform any kind of activity. Hence fat accumulation in this area is easy. Weak core muscles cannot use the energy that is being stored around. They need to be worked in order to use the fat being stored around them.

The human body is designed in such a way that it holds more of what it doesn’t get enough of. So, dehydration or drinking less water leads to the body holding onto water… i.e. bloating. Another reason for bloating is a high-sodium diet. More the salt you consume, more the water your body will try to hold onto (in order to maintain the electrolyte balance of the body).

The wrong kinds of food can cause a host of problems in the body, FUPA being one of them. Processed foods, refined foods, foods high in sugar, are the biggest contributors to FUPA. Apart from these, a diet rich in simple carbs and very few complex carbs and fibre will also lead to accumulation of FUPA. A lot of women resign to having a belly pooch as an inevitable side-effect of pregnancy. However, letting FUPA accumulate and not doing anything to get rid of it can lead to further complications in the future. Here are some of the health risks of FUPA.

The most significant risk that FUPA gives rise to is that of cardiovascular diseases. It has been shown that abdominal obesity (such as FUPA and excess trunk fat) is a more likely cause of cardiovascular diseases than overall obesity. This means people who are fat overall have a lesser chance of developing a heart condition than people who are fat in the abdominal area.

FUPA – a kind of ‘central obesity’ – predisposes you to type-2 diabetes. This is because the abdominal adipose tissue is hormonally more active than adipose tissue found in any other region of the body. It releases hormones that affect glucose tolerance negatively, increasing your chances of developing type-2 diabetes.

Dyslipidemia refers to an abnormal lipid profile. Typically, most dyslipidemia cases are those of hyperlipidemia (too many lipids in the blood) rather than hypolipidemia (fewer lipids in the blood). An elevated level of blood lipids, in turn, can increase your risk of atherosclerosis – a condition in which the inner walls of arteries get deposited with excess fat, thereby restricting blood flow. If not treated in a timely manner, it can further increase your chances of a stroke.

Sleep apnea refers to the condition where, in a supine position (i.e. when you are lying down on your back), a person is unable to breathe freely, in an unrestricted manner. While sleep apnea sounds like the person maybe snoring, there is no constant set rhythm to the perceived ‘snoring’, with people not breathing for a couple to a few seconds, and then jump-starting breathing with a loud sound. FUPA greatly increases your chances of sleep apnea.

Of several things that can lead to high blood pressure, FUPA is perhaps the most common in today’s day and age, thanks to our largely sedentary lives that contribute to FUPA (whether in men or women). Pregnancy only adds to the likelihood of developing FUPA (and thereby high blood pressure) for women.

Obesity is linked to a decrease in a person’s libido. This is partly due to the physical aspect of FUPA (wherein the hanging belly-fat prevents or greatly inhibits a pleasurable sexual experience), but also due to the mental or emotional aspect (where one may be severely negatively affected by one’s physical form, thereby losing interest in sex). How to Lose FUPA with the Right Foods

While refined and white carbohydrates – like refined flour, bread, pasta, rice, etc. – are bad for FUPA, complex brown carbs are good. So you don’t have to completely give up carbohydrates, just pick the right ones, like:

Believe it or not, fats mobilise fats! So you need to eat the good fats in order to make stubborn fat like FUPA go from your body. Consider including the following foods that are rich in polyunsaturated fatty acids (PUFA) and omega-3 fatty acids:

Vitamin C is a great stress-reliever… which is why orange extracts find their way into most of our beauty products! Your top 5 sources of vitamin C include:

Yoghurt is Yo’ Best Friend

Spices are known to help burn fat. Two spices that you can consider adding to your diet (either while cooking food, or as a topping for cooked food, salads, beverages, etc.) are:

Everybody likes to enjoy their drink once in a while, and a lot of ladies love their cocktails! But cocktails come with a lot of unwanted calories which you can significantly cut down on by choosing simpler mixers. The good news is – red wine is good! Resveratrol, found in red wine, actually helps burn FUPA.

Any kind of exercise will bring about two definite and positive changes in your body: it will kill your stress and will boost your energy levels! As mentioned earlier, stress is a big contributor to FUPA, so exercise will definitely help you combat stress and get rid of FUPA.

HIIT refers to a common pattern of workout where you perform exercises in bursts: 1 high-intensity exercise of short duration, followed by a short rest period, or 1 low-intensity exercise of longer duration. The idea is to give your body bursts of activity, in order to kick-start your metabolism, and speed up weight loss. The best HIIT Workout for FUPA is the treadmill routine: 4 minutes jog, and 1-minute fast run. You can do 4 rounds of this.

Core strengthening exercises are nothing but those exercises which work your abs. Planks, crunches, push-ups, leg-raises, mountain climbers, are all included in this category. It would be best to start with just 5 or 10 repetitions (reps) of each exercise, and then increase the count by 3-5 every day (or every alternate day). The challenge is to do this continuously for a month, without missing a single day, and to increase your reps in a steady pattern!

Yoga will not only improve muscle tone and cut down the stress, it will also act to keep FUPA away once you have lost it! Some of the best yoga poses for FUPA include: Get Rid of FUPA With Surgery After Pregnancy, Weight Loss or C-Section

In some cases, you might be tempted to consider surgery as an option to get rid of FUPA. We strongly advise you consult your gynaecologist, doctor, and a good specialist before you take this decision. It is important to evaluate your specific case (not just the general considerations of the procedure) before you decide to go in for this.

Once you make up your mind, here are some options you have:

Liposuction is the least invasive option you have for surgically removing FUPA. However, it is important to remember that it works best to remove fat from ‘pockets’ of the body, and not for overall fat reduction. Also remember that liposuction will get rid of only fat, and not loose skin.

Mosplasty not only removes FUPA but also tightens the underlying muscles of the region. This is like getting a ‘facelift’ but for your pubic area, hence also called ‘pubic lift’. However, more often than not, you might have to combine this with another surgical procedure like getting a tummy tuck or a labiaplasty for best results.

FUPA can either be treated as ‘just another permanent side-effect of pregnancy’, or it can be treated the right way – through proper diet, exercise, and conscious health and lifestyle choices. One approach makes it a permanent problem, the other will lead you to a permanent solution… the choice is yours!

Previous article « Do You Spoon-feed Your Baby? This Study Has Very Important Advice for All Moms
Next article 10 Good and Bad Effects of Quitting Dairy »