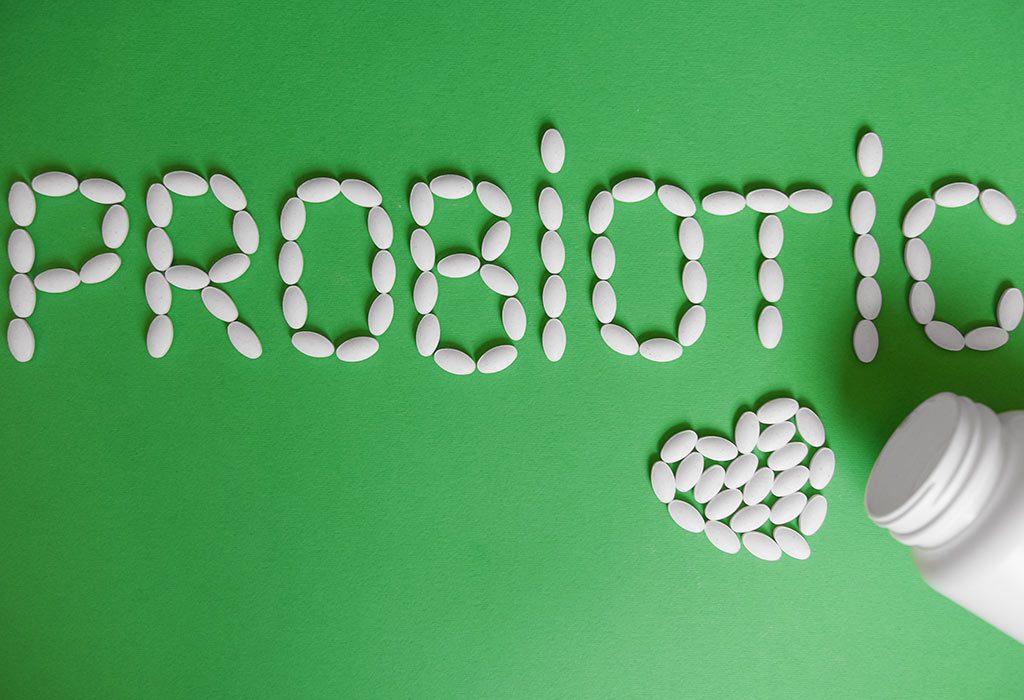 Breastfeeding is all that a baby needs. The food and nutritive value required by a baby are satisfied wonderfully by breastfeeding, which also helps in creating a stronger bond between the mother and child. Even though breast milk is usually enough for the baby, some doctors and other people have started realizing the benefits of probiotics, and have been wondering if they are the right fit for a lactating mother, too.

What Is a Probiotic? Any reference to bacteria within our bodies is not simply in reference to a disease or an infection. There are tons of bacteria and microbes present in the human body that play an essential role in keeping us healthy. Our intestines contain a large quantity of these “good” bacteria, which help support digestion and overall health. Current lifestyle and food trends have led to a devastating reduction in these bacteria, causing a widespread presence of digestion related issues. Taking probiotics is the corrective measure, as we can then supply our body with those bacteria, and help bring up their quantity the right way.

Is It Safe to Take Probiotics While Breastfeeding?

For a pregnant woman to opt for a probiotic for newborn breastfeeding could also mean that he gets the probiotics, too. But is that a safe option? It actually is.

This isn’t an unnatural supplement that is artificial to the body. It is a way to replenish the presence of healthy bacteria that is already present inside. Most babies have these in good amounts, since they are present in breast milk. For lactating mothers to consume probiotics so that their own bacteria are in good quantities, shouldn’t pose any problems.

How Babies Get Probiotics

The healthy bacteria inside a baby begin to thrive almost immediately following his birth. Primary ones amongst those are bifidobacteria and lactobacilli. When the baby is in the womb, many probiotic bacteria are already passed to him. Later, during natural delivery, the baby comes in contact with the vagina, where a large number of healthy bacteria are present. These find their way into the baby as well, which is why babies born vaginally seem to be healthier than other babies. This is precisely why doctors advised pregnant women against washing their vaginas with cleansing agents or chemicals.

After delivery, the main source of probiotics for babies is through breast milk. Prebiotics assist the development of existing healthy bacteria in the baby. These elements are indigestible and, hence, end up creating a protective barrier for the intestine, allowing the bacteria to grow in large numbers. These bacteria inevitably help build a strong immune system, and mature the defense mechanism of a child in early stages. Breastfed babies end up being able to combat infections quite better, due to this exact reason.

Health Benefits Of Probiotics for Baby and Mother

Here are some of the health benefits of probiotics for both the baby and you:

1. The Mom Stays Healthy and Protected

For all the beauty around it, breastfeeding actually rids the mother’s body of many nutrients as they are transferred to the baby. This also provides a lot of antibodies which can reduce the strength of the immunity system of the mother. By consuming probiotics, they act as reinforcements and bring back the immunity necessary to keep you healthy. It also ensures that your metabolism stays streamlined and regulated.

2. The Baby’s Immune System Gets a Boost

A large part of the immunity that a body provides comes from the intestines. Probiotics consumed by the mother do find their way into the baby, one way or the other. There are natural antibodies that are absorbed by the child via breast milk. But when these are complemented with probiotics internally, the immunity system rapidly starts growing and reaching a mature stage.

3. Reduces the Frequency of Reflux

A specific type of probiotic bacteria called Lactobacillus reuteri provides a unique benefit. Studies have shown that babies who consumed those bacteria showed fewer signs of suffering from acid refluxes compared to other babies. The presence of probiotics stimulates the digestion process, reducing the chances of food being present in the stomach for long intervals and thus preventing reflux.

4. Improves the Frequency of Bowel Movements

Constipation is an ailment that many babies suffer from in the early days. Some do continue to have it later in life, too. Probiotics have shown marked improvement in babies that have had chronic constipation. Studies have revealed a streamlining of bowel movements and better consistency in poop when probiotics were consumed by babies.

One of the most common problems that young babies and newborn children face is eczema. But, probiotics have been able to counter that, too. By including probiotics in the diet of the mother, babies have a higher chance of preventing any eczema from occurring for at least a couple of years of early life.

6. Reduces the Chances of Rashes and Yeast Due to Diapers

Many times, the rashes that you observe on a baby due to diapers are actually caused due to a yeast infection. This yeast is already present in the digestive tract of the baby, and its prolonged exposure leads to an infection. A probiotic cannot remove the infection, but it can prevent them from happening in the first place. Certain probiotics that are rich in bacteria such as lactobacillus acidophilus or bifidobacterium are known to work wonders on yeast infection. What these do is act directly on the yeast present in the gut and reduce their growth. If antibiotics are already being administered for the infection, probiotics shouldn’t be given until at least a couple of hours after the medicine.

7. Prevents the Occurrence of Colic in Young Babies

Quite a substantial number of babies seem to be suffering from colic. This usually happens when a baby ends up taking in a lot of air while breastfeeding. It usually goes away after the first 24-30 weeks but until then, it can cause quite a bit of discomfort, primarily due to the presence of a gut that undergoes inflammation. All it needs is some help from friendly bacteria, which can be provided by probiotics.

Although there is no conclusive evidence yet, multiple studies have shown the administration of probiotics to reduce the time a baby spends in crying due to colic pain, a reduction in the number of times a baby vomits, as well as increased amounts of bowel movements, all compared with babies not administered probiotics.

8. Helps Relieve the Discomfort of Thrush

This is yet another infection that is caused by yeast. Primarily affecting the mouth, thrush in infants can be found on the nipples of the mother, too. The source is unknown but antibiotics are deemed to be a possible cause as well. If not treated in time, it tends to stay for longer periods and get even more painful over time. Consuming probiotics can not only relieve the discomfort but can even end up treating the condition altogether.

9. Assists in the Production of Vitamin B

Vitamin B is an absolute necessity for both, a young baby and the mother. Probiotics are known to produce these vitamins, which directly affect the metabolic activities and help absorb the necessary nutrients. The vitamins are also essential in keeping the levels of iron intact to prevent anaemia from occurring, as well as maintain the healthy tissue of the skin while promoting the growth of the nervous system.

10. An All-Around Health Monitor and Protector

Probiotics do plenty of things, such as absorbing minerals for the body, removing toxins, stimulating digestion, reducing inflammation in various organs, reducing chances of disorders occurring, strengthening immune response, and a lot more! They provide 360-degree protection for the developing child. If you want to incorporate probiotics into your baby’s diet and yours, here are some foods that you can try.

Yoghurt and curd-based buttermilk make for a great source of probiotics.

Acidophilus fortified milk is not only sweet to taste but gives the necessary probiotics for your gut too.

Specially fermented soft cheese, like gouda, keep the probiotic bacteria alive until they reach the intestine and thrive.

This is a type of fermented tea that has been providing benefits for many years. However, avoid this if you suffer from a candida infection. Also note that this is high in sugars.

A preparation of fermented cabbage, it provides probiotics along with a ton of other nutrients.

This can be literally called a probiotic-rich alternative for tofu, which can be used in multiple recipes.

Needed another reason to dive into fermented pickled veggies? The presence of probiotics should make it well worth it for you. The homemade ones are the best.

Made from beans, rice, and fermented rye, this probiotic soup helps relieve digestive issues as well.

Spirulina and various blue-green algae can find their way into your body from the ocean and give you the probiotic boost you need.

Not only does it contain probiotic bacteria, but it is a great combination of a multitude of vitamins.

Made from fermented grains, cow’s milk, goat’s milk, or any animal milk that is high in lactose, kefir provides an immunity boost, as well as a supplement of antioxidants. Water kefir is also a type that you can consume.

There you go! That’s the reason why dark chocolate is so popular among health fanatics – the presence of probiotic bacteria! However, remember that dark chocolate is also high in sugars, and may contain other additives. Be sure to check the percentage of cocoa present, and read the ingredients label carefully before consuming.

Keeping your baby strong, and helping him stay strong ahead in life is what the initial stages of the baby’s growth are all about. By including probiotics as a part of your diet, you can ensure they find their way into your little one and provide him with the strength he needs to grow rapidly and live a healthy life.