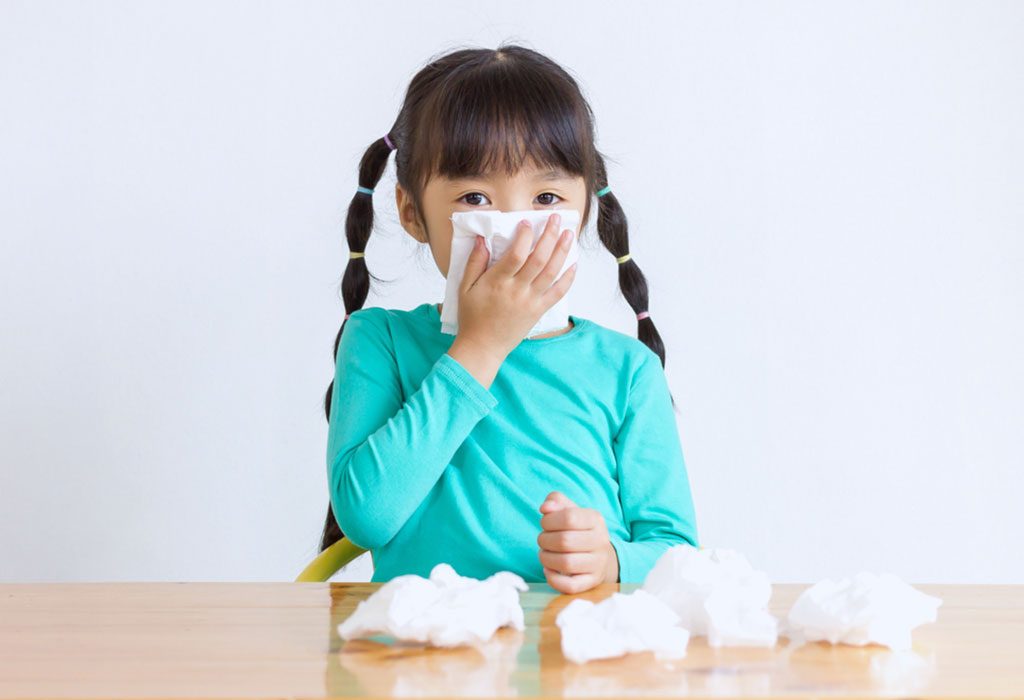 A child’s sinuses do not develop until he attains teenage although two tiny sinuses, maxillary and ethmoid, are present at birth. Unlike adults, sinus infection in kids is difficult to diagnose since it may occur due to other problems like allergies or viral infections. Here’s some information about sinusitis in kids and how it can be diagnosed and treated promptly.

The air-filled passages or cavities near the nasal tracks are known as sinuses. The four types of sinuses found in children are as follows:

This sinus is present at the time of birth and grows until the child becomes an adult. The ethmoid sinus is situated in the facial area near the bridge of the nose.

This sinus is placed near the cheeks, inside the face. It is present at birth and continuously grows.

This sinus does not develop until the child is 7 years old and is located in the forehead area.

This sinus is placed deep in the face, just behind the nose. The sphenoid sinus does not develop until the child reaches adolescence.

The infected condition of sinuses near the nose or forehead is known as sinusitis. Sinusitis generally occurs if your child has an allergic inflammation or a severe cold. In children, it is referred to as paediatric sinusitis. Sinus infection in kids is a common problem in young children.

Sinusitis is categorised based on the duration of infection.

This type of sinusitis lasts for 7-10 days, and the child will get better when administered the right treatment for it.

The symptoms of subacute sinusitis can be seen for four to eight weeks. Treatment does not show any improvement initially and needs a sustained approach before the person shows any changes.

Chronic infections affect a child when he or she has acute sinusitis regularly or if the earlier infections were not treated in a professional manner. The symptoms of chronic sinusitis in children last for six to eight weeks or even longer. It can be identified by post-nasal drainage and extreme congestion in the nasal passage.

When your child is affected by three or more bouts of acute sinusitis, it is known as recurrent sinusitis.

Causes of Sinusitis in Kids

Common cold or Upper Respiratory Infection (URI) can cause sinus problems in children. During URI, the nasal passages are swollen, which blocks the paranasal sinus opening, and this leads to a sinus infection. Sinusitis happens due to allergies, too because during this time, mucus production is heightened, and the nasal tissue is infected and swollen.

The following too can lead to sinusitis in children:

Your child’s age is the primary criteria for symptoms of sinusitis. But these symptoms may vary from one child to another. These symptoms include the following: Sinus headache in a child is generally found to be migraine-related as it causes pain in the face front and causes immense pressure under the eyes. If nausea or vomiting is missing, consult your child’s paediatrician to be sure about the diagnosis.

Diagnosis of Sinusitis in Kids

Based on a preliminary physical examination and the symptoms your child shows, your child’s doctor will be able to diagnose sinusitis. Occasionally, some additional tests may also be required to confirm the doctor’s diagnosis. These include the following:

Treatment of Sinusitis in Kids

In order to reduce sinus pain in children, your child’s physician will arrive at a specific line of treatment after analysing the following points:

Home Remedies for Sinusitis in a Child

There are plenty of home remedies that can provide your child with relief. These include:

When sinusitis is on the ascendancy, consider installing a humidifier in your baby’s bedroom. Your tiny tot will be able to breathe easier. Relaxed breathing aids to create a better sleep pattern which gives the baby much needed rest to fight off infection.

A saline nasal spray is helpful in thinning out mucus and opening the nasal passage. Your baby may resist it initially, but it will be worth the effort as the mucus softens and can be easily removed. Use the spray when the baby is in an upright position at least a couple of times a day or as directed. In order to ease the congestion, steam is a pretty useful ally. The sinus passages are soothed while the mucus is softened to a large extent. Run the shower in the bathroom and let steam accumulate until the baby feels comfortable. Add a few drops of eucalyptus oil to the baby’s tub to tackle stubborn congestion.

If your little one is unable to rest due to stubborn sinusitis, try out a slightly aggressive home-based treatment. Mix one drop of tea tree oil with coconut or almond oil and apply this on the baby’s nostrils using a cotton swab. The anti-fungal and anti-bacterial properties of tea tree oil help your little one to fight the infection and prove to be an effective sinus medicine for kids.

Feed your child water and fresh juices through the day to keep his body hydrated. This will help loosen mucus and clear the sinuses in the most natural way possible.

Dip a clean washcloth or a soft hand towel in a bowl of hot water. Ensure the towel is warm and not hot when you apply it on your child’s face. Applying this encourages mucus draining and keeps the discomfort to a minimum level.

Can Sinusitis Be Prevented In Kids?

Sinusitis can e prevented with these simple tips:

While dealing with sinusitis in children, it is important to relieve them of their suffering by attacking the source of infection. Remember, a newborn and his systems are sensitive and will take time to adjust to the world around them. Make sure you consult your doctor if your baby’s symptoms persist for more than two weeks.