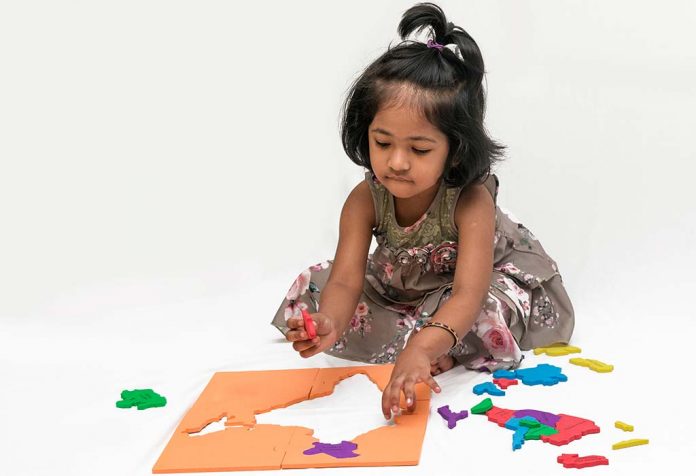 Kids nowadays like to spend their time in front of the television or Youtube watching cartoons or videos but are mostly unaware of the things happening around them. Every kid should have basic general knowledge about their country, but video/mobile games and cartoons keep them away from this knowledge and sometimes make them anti-social in the long run. If you are searching for the best way to impart this knowledge to them, it might be a good idea to engage with them in some fun activities. Games and activities help them increase their knowledge while indulging them in a fun way.

GK Questions And Answers On India For Preschoolers

Preschoolers are generally curious about everything around them. This is the period when they learn new habits and information very quickly. Use activities like quizzes to make learning exciting and build their curiosity about the world around them. Whether it is the field of flowers or games or animals, they will develop an interest in building their general knowledge through fun activities.

We have compiled some basic GK questions for your preschoolers (age: 3-5 years) to help them gain some general knowledge about India.

1. Which animal is the national bird of India?
Answer: Peacock.

2. What is the Hindi name of India?
Answer: Bharat.

3. How many colours are there on the Indian Flag?
Answer: 3.

4. Who is the king of the Jungle?
Answer: Lion.

6. How many union territories are there in India?
Answer: 7

7. Which is the smallest state in India?
Answer: Goa.

8. Which animal is the national animal of India?
Answer: Tiger.

9. What is the capital city of India?
Answer: Delhi.

10. Who is the father of the nation (India)?
Answer: Mahatma Gandhi.

11. Which is the hottest place in India?
Answer: Rajasthan.

12. Which is the southernmost city of India?
Answer: Kanyakumari.

13. What is the National Currency of India?
Answer: Rupee.

14. Which festival is celebrated in India as the festival of colours?
Answer: Holi.

15. Which is the national sport of India?
Answer: Hockey.

GK Questions And Answers On India For Big Kids

As children are growing up, they pick habits from their surroundings. They keep on observing what is going around them and learn many things by watching or reading. Encourage this learning by engaging with them on various topics ranging from history to geography and keep them well-informed. Here are some relevant questions about India to help them learn some valuable facts.

2. Which is the largest union territory of India?
Answer: Andaman & Nicobar Island

4. What is the capital of Arunachal Pradesh?
Answer: Itanagar.

6. Which of the seven wonders of the world is located in India?
Answer: Taj Mahal

7. Which is the longest river in India?
Answer: Ganga, according to distance covered within India. Bramhaputra is longer overall, flowing through Tibet, Bangladesh and India.

10. Which latitude passes along India and from where?
Answer: Tropic of Cancer ((23.4° north of Equator) passes through the middle of India (8 states).

11. Which state in India has the highest population?
Answer: Uttar Pradesh

12. What is the national information letter of India?
Answer: White Letter

13. What is the national anthem of India?
Answer: Jana Gana Mana

14. Which Indian state has the smallest coastline?
Answer: West Bengal

15. In which state of India is the International kite festival celebrated?
Answer: Gujarat

16. What is the national heritage animal of India?
Answer: Elephant

17. Which are the countries that share boundaries with India?
Answer: China, Bhutan, Pakistan, Afghanistan, Myanmar, Nepal, and Bangladesh.

18. Where is the headquarters of ISRO located?
Answer: Bangalore

19. What are the names of the houses of Parliament?
Answer: The Lok Sabha and Rajya Sabha

20. Which city is known as the Pink City of India?
Answer: Jaipur

21. Who was the first Indian to receive the Nobel peace prize?
Answer: Rabindranath Tagore

23. Who is known as the Flying Sikh of India?
Answer: Milkha Singh

24. How many languages does the Indian Constitution recognize?
Answer: 22 languages

25. Who was the first Indian woman to be decorated with Bharat Ratna?
Answer: Indira Gandhi

26. Which temple dedicated to the sun-god is shaped like a chariot, and where it is located?
Answer: Sun Temple in Puri

27. Which is the largest biosphere reserve in India?
Answer: Nilgiri Biosphere Reserve

It is true that no matter how much information we learn, there’s always more to learn. It is impossible to know all the information about the world, but general knowledge about the world and your own country is a good start. You can start preparing your kids at an early stage to help develop a love for learning through practice and curiosity. The information they learn at an early stage will keep them knowledgeable and help them gain different perspectives.

My Backbone – My Husband, Whose Presence Fills Me With Courage and Love

Neck Pain after Sleeping – Causes and Tips to Ease