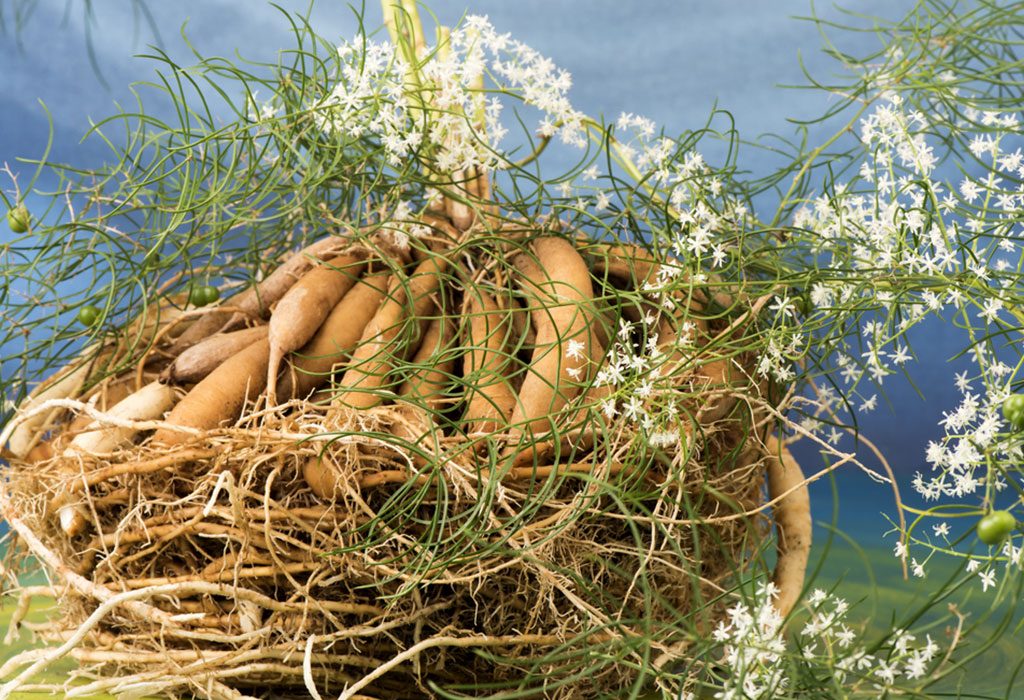 Shatavari or asparagus racemosus is a potent therapeutic agent which promotes overall well-being and good health. Shatavari, which means ‘a plant with 100 roots’, holds great importance in Ayurveda and is a solution to various health conditions. Shatavari is used as a special tonic by women of all age groups to help them ease through many of the natural transitionary phases of life. it is effective for various things, such as regularising female hormones, reducing PMS symptoms, enhancing breastmilk production, improving fertility and vitality, managing menopausal symptoms, and so on.

Can You Use Shatavari While Pregnant?

Shatavari strengthens the uterus and is known to help stimulate breast milk production during lactation. Taken after childbirth, it also improves immunity and strength and enhances the production of breast milk. However, it is advisable to consult an Ayurvedic doctor before consuming Shatavari during pregnancy to know the optimum amount that should be consumed and also to understand its interactions with other supplements you may be on.

Shatavari roots have various minerals such as vitamin A, B1, B2 and E, potassium, magnesium, calcium, iron and folic acid, Along with minerals, Shatavari is also abundant in ascorbic acid. It is rich in essential fatty acids such as gamma-linolenic acid, which is highly beneficial for treating diabetes mellitus, arthritis, depression, high cholesterol and heart disease.

Benefits of Eating Shatavari During Pregnancy

Asparagus racemosus has been used as a traditional healer for ages. It possesses phytochemicals that play an important role with anti-fungal, diuretic, anti-tumour and immunostimulatory properties. Shatavari is also a galactagogue which increases the production of breast milk in lactating mothers. The presence of other compounds such as saponins, sulfur-containing acids, oligosaccharides, and amino acids makes it a beneficial herb that promotes good health. Here are some of the benefits of consuming Shatavari Kalpa during pregnancy:

Asparagus racemosus is rich in folic acid which is a critical nutrient required for the development of the foetus. It is required both before and during the pregnancy to have a healthy baby.

The benefits of folic acid for pregnant women include:

Shatavari is known for its function as a galactagogue (milk enhancing substance) which is helpful in increasing the production of breast milk in lactating women. Its galactagogue effect is attributed to the presence of steroidal saponins, Shatavarins in the plant and confirmed by the evaluation of parameters such as levels of the hormone prolactin. Clinical trials with Shatavari root powder have shown elevated prolactin levels that were up to 3 times higher than normal with no toxic effects.

It is said that the root extracts of Shatavari powder can stimulate the immune cells of the body. The body’s immunity after an infection can be suppressed and Shatavari roots can stimulate the immune system to fight against any new infection and speed up recovery. An active compound called sapogenin in Shatavari is a powerful immune-stimulator which is known to augment the body’s resistance in normal and immunity-suppressed phases.

Vitamin C is abundantly present in Shatavari and is an essential nutrient for the body. It works as an antioxidant that protects the body from free radical damage. Vitamin C boosts the body’s immunity and prevents viral infections such as colds. It is also important for the formation of collagen which is the main protein that helps form the skin and other connective tissue.

Vitamin E is a much-needed nutrient for both the mother and the foetus. Shatavari is rich in vitamin E, and here are some of its uses:

Shatavari is rich in vitamin B6, which is an essential vitamin for the body. It is needed by both the foetus and the mother to boost the immune system and regulate bodily functions. It also prevents the occurrence of nausea and morning sickness and regulates blood pressure.

Vitamin K, which is also an essential vitamin for the body, is abundant in Shatavari. It is essential for maintaining cardiovascular health and preventing coronary heart disease. It also helps maintain the functions of the blood vessels in the mother and baby.

Shatavari has properties similar to the female hormone oestrogen. Therefore, women who are on Shatavari kalpa during pregnancy can experience breast tenderness if they already have elevated oestrogen levels.

Dosage of Shatavari for Pregnant Women

To get the best benefits of Shatavari root during pregnancy, consume Shatavari kalpa granules as per the directions of your healthcare provider. The therapeutic dose may vary from person to person, so consult your doctor for the same.

Shatavari is immensely helpful for lactating mothers. However, as it has positive as well as negative side-effects and it should be used only under the supervision of your doctor during pregnancy.