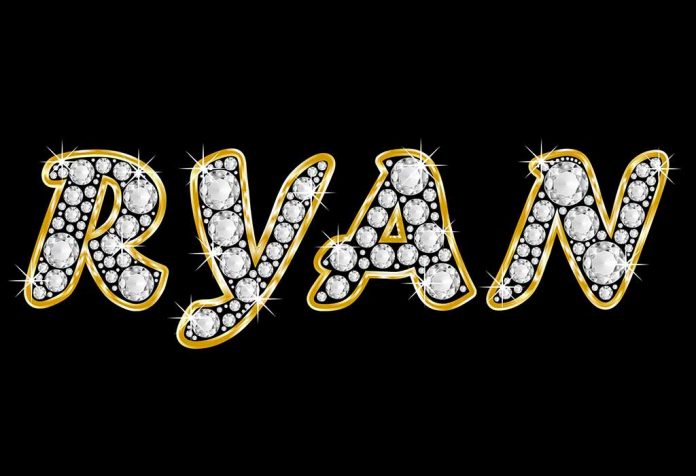 Derived from the surname O’Riain, Ryan is a classic last name of Irish origin that means ‘little kings.’ Pronounced ‘ree-an’ in Gaelic, the name is a composition of words ‘Righ’ and ‘An,’ which together means “little king.” It’s a cheerful alternative to the immensely popular Kevin and Brian and consistently wins over the more modern Rylan and Ryland.

What Does Ryan Mean?

Inspired by the surname Ryan, Rían is composed of the Irish-Gaelic elements rí, meaning “king” and an, a diminutive suffix. Thus, in ancient Ireland, the meaning of Ryan implied a ‘royal’ stature within the chiefdoms and clans. In the US, Ryan is a unisex name and its variant spellings Ryann and Ryanne are also used to name girls. However, this name has been distinctly masculine in the rest of the English-speaking world. This stylish name with an imperial meaning gives your son to cultivate the values throughout his life.

Ryan originated from the Irish surname O’Riain, meaning “son of Rían” or “descendant of Rian.” As “Ri” in Irish means “King,” the name Rian means ‘little King.” The surname Ryan is an anglicized form of the name of the Irish king Rian who ruled over the South Leinster territory in the 10th century.

Name variations give a fashionable twist to a name with alternate spellings, abbreviations, and transcription errors. Here are some of the Ryan name variations with some other spellings that can distinguish them from others who share the same name:

How Popular Is the Name Ryan?

Between 1976 and 2006, Ryan appeared in the top 20 male given names in the US. After appearing in the top 1000 names for boys for the first time in 1946, it steadily gained popularity over the next three decades. Actors like Ryan Reynolds, Ryan Gosling, and Ryan O’Neal have boosted the popularity of this name in the US. It even appeared as a popular name for girls in the 1970s, first appearing in the top 1000 in 1974.

According to the Social Security Administration database, Ryan became a favorite in America from 1976 to 2009. It was most popular in 1991 but slipped to the 23rd spot in 2010. Ryan is sitting at number 57 for boys and number 450 for girls in 2020. The name is especially popular in the Gaelic-influenced nations of Northern Ireland, Scotland, and Ireland, where it ranked as one of the most favorite names within the Top 10. It also performs outstandingly well in countries like Canada, Netherlands, England, Australia, United States, and France.

Consistent search popularity of over 26 has been recorded in terms of interest for the name Ryan, reaching 100 in June 2011. The lowest popularity index was recorded at 21 in March 2021.

Interest in Ryan – US

Search trends for the name Ryan show a search value of over 22 for six months, reaching 100 in June 2011. It scored the lowest position on the popularity scale at 22, approximately seven times throughout the decade.

Popularity of the name Ryan

Interest in the name Ryan is seen to be highest in Ireland in the past ten years. United States, Canada, United Kingdom, and Australia follow close. This concise Christian name, with a meaning that represents power, positivity, and confidence, makes it immensely popular among parents in the US.

Search trends of Ryan in the US

North Dakota is the sub-region in the US where the most searches for the name Ryan have been recorded the highest over the last ten years. District of Columbia, Pennsylvania, Wisconsin, and Minnesota are the top 5 cities where search trends for Ryan have been registered to be the highest.

Middle Names That Go With Ryan

A middle name can carry the legacy of an ancestor, a loved one, or a spiritual role model. Here are some of the best suggestions for double names with Ryan that may help to lighten the load of a first name:

Celebrity names help to build a child’s persona in the later years. Here are some of the most popular personalities named Ryan who can have a positive impact on the name’s popularity chart:

Names that rhyme with Ryan can sound melodically closer to the classic name. Here are some alternatives that sound twice as nice as Ryan:

Sibling names can take the rhyming route to form a coherent unit. Here are some of the well-thought-out sibling names that go with Ryan:

Nicknames are modified variations of a name that symbolizes the bond of love between parents and children. Here are some of the adorable nicknames for the name Ryan:

The meaning of the name Ryan encompasses qualities like strong leadership skills, bravery, and a selfless heart fit for a king. No wonder it is seeing a resurgence of interest among parents looking for a unique name that always shines, notwithstanding its ranking in the popularity chart.