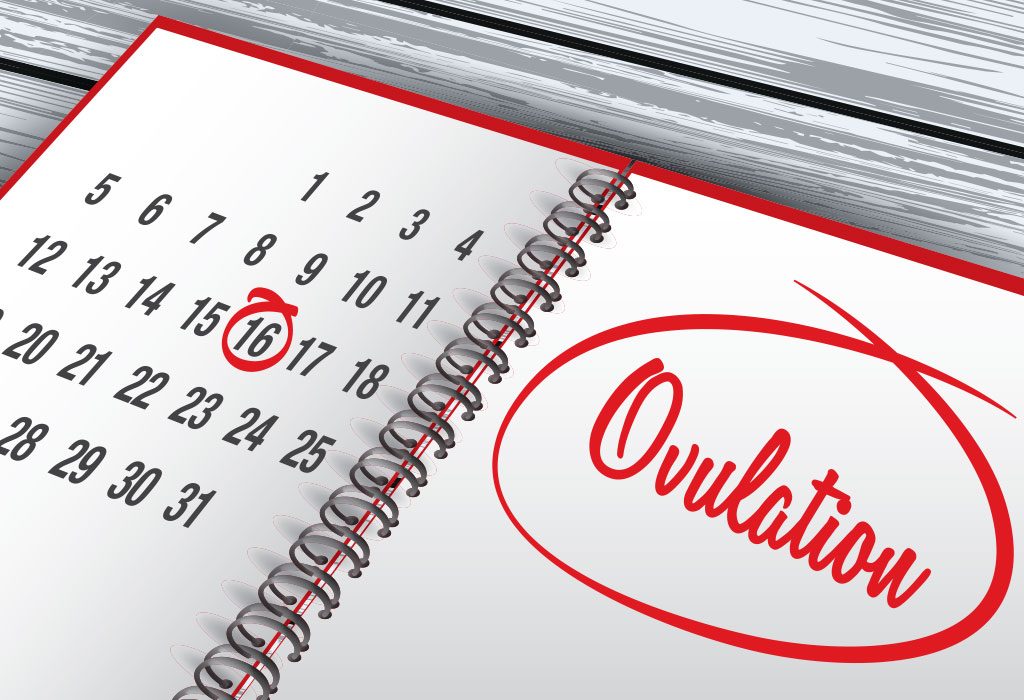 Ovulation happens when one or more eggs get released from the ovaries between your monthly periods. Usually, 15-20 eggs mature inside the ovaries, and the ripest egg is discharged from the ovarian follicle. The egg gets released only when it is completely mature. It then travels down the fallopian tube which connects the ovaries to the uterus. It is in the fallopian tube that the egg meets the sperm, if available, and is fertilised. Ovulation and hormonal release are controlled by the hypothalamus, which is a part of the brain. Put simply – ovulation is the period when a woman is most fertile.

When Does Ovulation Happen?

You can increase your chances of getting pregnant if you know when you are ovulating. Though it is difficult to predict the exact dates of ovulation, it usually happens between 12 and 14 days before the next period starts. It is important to note that this is an average estimation, and the time of ovulation could be a few days before or after that.

If you have a regular period cycle, which is a 28-day menstrual cycle, consider the first day of your period as Day 1. You are likely to ovulate around the days 10 to 15.

If you have irregular period cycles, ovulation can be a week later or earlier, and it may differ from one month to the other.

Once the egg is released, it has a lifespan of 24 hours. If it does not get fertilised, it degenerates and triggers the next period. On the other hand, your partner’s sperm has a longer lifespan and can fertilise the egg for up to five days after intercourse.

When Is My Fertile Window?

Fertile window refers to the days in a woman’s menstrual cycle when she is highly likely to get pregnant. The woman gets pregnant if she has intercourse on the five days before her ovulation to the day when she ovulates. These six days form the fertile window for her. As a result, any intercourse that happens within six days of ovulating results in a high chance of conception. If a woman has intercourse closer to the ovulation date, her chances of conceiving are higher.

Do You Ovulate Every Month?

Ovulation gets affected if you are stressed or ill. Sometimes, high levels of stress, extreme exercise or improper diet can trigger an anovulatory cycle which means that ovulation does not occur in that cycle. During this cycle, the woman experiences some bleeding which is not a period but is caused because of a build-up in the uterine lining that is not capable of sustaining itself.

The pituitary gland in the brain produces the follicle-stimulating hormone at the beginning of the menstrual cycle. This hormone stimulates the ovaries to produce mature eggs. The follicles are cavities in the ovaries that are filled with fluids. Each of them contains an undeveloped egg. The hormone stimulates many follicles to develop and produce the estrogen hormone. A number of follicles start to develop, but normally only a single follicle becomes dominant. The egg in this follicle starts to mature. The estrogen level, which is lowest on the first day of the ovulation period, keeps increasing and plays an important part in thickening the lining of the womb with nutrients and blood. This helps prepare your body for a possible pregnancy. If the egg gets fertilised, this lining provides the required support and the nutrients that the egg needs to survive and grow. The high levels of estrogen are associated with sperm-friendly mucus which is called the fertile cervical mucus. This is a thin and slippery discharge that is cloudy white. The mucus makes it possible for the sperm to swim easily and survive for several days.

The level of estrogen in the body continues to increase and causes a rise in the luteinizing hormone (LH). The LH surge makes the dominant follicle rupture, and the follicle then releases the egg from the ovary to enter the fallopian tube. This is what causes ovulation.

How to Predict Ovulation

Though it is difficult to predict exact ovulation days, there are a few ways that help estimate the likely days of ovulation.

If your menstrual cycle is regular, you can use this method, which is also known as the Standard Days Method. In this method, you need to count back 14 days from the day when your next period is expected. The fertile window is calculated on the day of ovulation and five days preceding it.

Though this is a very easy method, it is not very accurate even if you know exactly when your next period date is. This is because ovulation does not necessarily happen 14 days before menstruation.

The ovulation predictor kit lets you test your hormone levels. The test kits are of two kinds. One tests urine and the other tests the saliva. The pee-on-a-stick test indicates when the LH level has gone up, which indicates that one of your ovaries will soon release an egg. The saliva test uses a microscope and spots a pattern in the dried saliva that tends to indicate the rise in the estrogen level that happens a few days before ovulation.

The ovulation kit is accurate 99% of the times to detect the surge in LH. However, the kit is unable to confirm that ovulation will occur a day or two later. Also, some women tend to have an LH surge without any egg release, or they may have false peaks which could be misleading. Using the charting method to track any change in your basal body temperature can also help determine the likely ovulation days. This, however, must be done for a few cycles before you can understand your body’s pattern. The pattern that develops over time lets you know when you may be ovulating next. This method is free but takes a lot of time, effort and patience.

The BBT changes 12 to 24 hours after ovulation, and the fertility of a woman is the highest two days before ovulation. Since the life span of the egg is only one day, when using the BBT method, there may be very less time left to conceive.

Cervical mucus is the vaginal discharge that can sometimes be seen on the underwear. During most of the month, one can spot very little mucus, and it is also very sticky and thick. However, three to four days before, during and after ovulation, there is an increase in the discharge, and there is also a change in its texture. It is clear, slippery and very stretchy. This can be used as an indication to predict your ovulation days.

This method requires a woman to check her ovulating days by seeing the consistency of the cervical mucus. The method is solely dependent on the woman’s judgment, and since there is no instrument to measure it, it may sometimes go wrong. The method is also not useful for those who produce lots of mucus or have drastically varying cycles.

So, if you want to know when you ovulate, you can use one of the above methods.

Signs That You Are Ovulating

Am I ovulating? You can look for some signs that can help you know if you are ovulating. However, these symptoms vary from person to person, and it is also possible that you may not experience any symptom at all.

The common signs that let you know that you are ovulating are:

1. Change in the Texture of the Cervical Fluid

The cervical fluid resembles egg whites and lets you know when you are close to your ovulation days. A few weeks after your periods, the body begins to prepare for ovulation, and this makes the mucus clear and slippery. The mucus stays in this form for around nine days. The look and feel of cervical fluids may vary from one person to another. However, you are likely to see some change in the texture of cervical fluid when you are ovulating. If you have a lot of fluid discharge on a day (much more than usual), and the mucus becomes stretchy when collected on your fingers you can expect ovulation to occur within the next two days, or the chances are you are ovulating that day.

2. Change in the Basal Body Temperature The cervix, which is the lowermost part of the uterus, goes through a lot of changes during ovulation. When you ovulate, it becomes soft and high. It also becomes open and wet. It may take some time to know how your cervix feels and what changes it goes through at the time of ovulation. We recommend that you chart cervix changes for a period to see a pattern.

What Are the Symptoms of Ovulation?

The other signs of ovulation pregnancy indications are:

It may be a little difficult to be able to track these symptoms at first, but it gets easy to recognise them with time. Tracking these signs makes it easy to understand the ovulating days, and therefore, plan the pregnancy.

When Should I Go for Ovulation Testing?

Knowing when you are ovulating can help maximise your chances of getting pregnant. Taking an ovulation test lets you know the menstrual cycle and ovulation days in the cycle. Ovulation test works by identifying the presence as well as the concentration of the luteinizing hormone that is present in your urine. This test is especially useful for people who do not have regular periods.

You can do an ovulation test on the 17th day minus your menstrual cycle. So, if you have a 28-day cycle, you can start checking whether you are ovulating from the 11th day and continue until the 17th day. If your cycle is irregular, you should start testing based on the shortest cycle that you had in the last 6 months. The more the variation in your cycle, the more tests would be needed to know your ovulation days. Most women ovulate 12-36 hours after their first positive ovulation test.

You can buy an over-the-counter ovulation test kit or consult a doctor. Most kits specify at what time of the day you need to do the ovulation test. Some kits require the test to be done in the morning when the LH levels are high while others require the testing to be done in the afternoon when the hormone traces appear in the urine. Therefore, it’s best to follow the instructions on the package.

If you plan to get pregnant, it is important to know the days you are ovulating on as these are the days on which you are the most fertile. While it is true that no one can predict the exact date of ovulation, the methods and symptoms listed above can help you make an informed estimate, and thus increase your chances of successful conception.