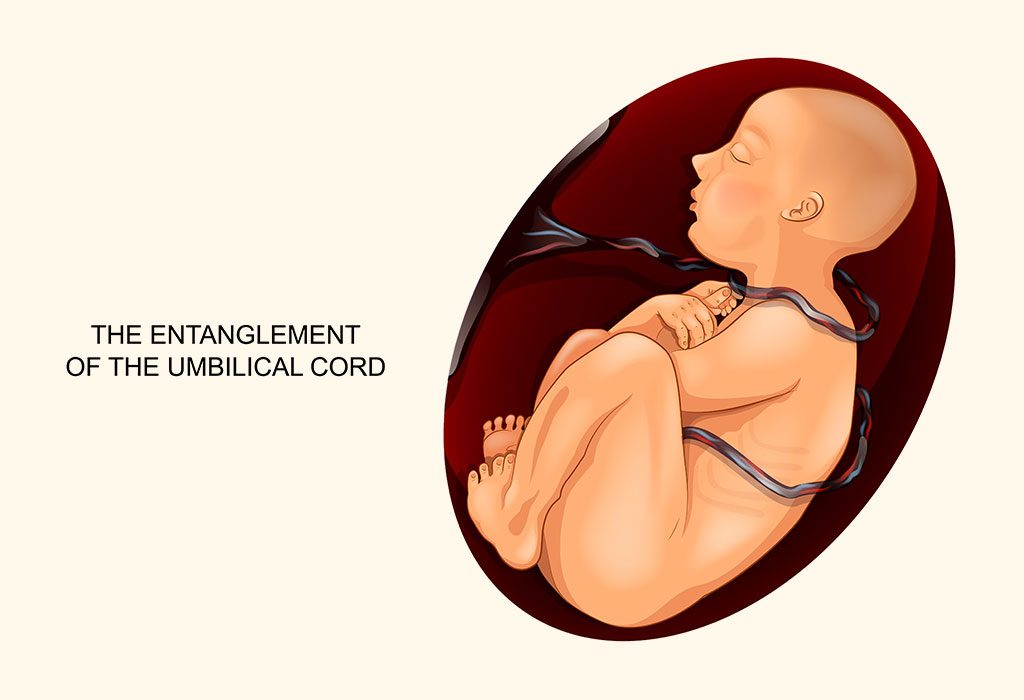 The umbilical cord connecting the mother to the foetus is responsible for the development of the baby inside the womb. It is what provides blood, oxygen, nutrients, vitamins, fats and proteins to the foetus. The reverse scenario of carrying waste products and de-oxygenated blood back to the mother’s body is also carried out by the umbilical cord. During pregnancy, the baby keeps moving inside the womb, which could result in the cord getting wrapped around the neck. The complication is also called nuchal cord, and it is a common occurrence during pregnancy afflicting almost 20%-30% of expectant mothers. In this article, we shall discuss all the aspects a would-be-mother should know about umbilical cord around baby’s neck to avoid any stress that may cause due to uncertain situations, which are common when it comes to pregnancy.

What Is a Nuchal Cord?

A normal and healthy umbilical cord is well protected by a soft, gelatinous textured filling called “Wharton’s Jelly”. This substance keeps the cord from tangling regardless of how many times the baby turns in the uterus. Umbilical cord entanglement occurs when the cord entwines itself around the entire body of the fetus. However, when the umbilical cord is entangled around the neck during pregnancy, it is known as a nuchal cord.

Many times, the baby has the umbilical cord loosely entwined around the neck, but it doesn’t cause any harm. There are times, however, when the nuchal cord could turn into a complication, especially when it wraps tightly around the foetus’ neck before delivery. It then disrupts the blood flow, and the supply of oxygen and nutrients from the mother to the foetus causing severe injuries or birth complications like asphyxia and cerebral palsy.

What Is a Double Nuchal Cord?

The umbilical cord is generally long enough to wrap comfortably around the neck of the baby with enough length left over. Nature has essentially designed the umbilical cord to be wrapped around the neck without causing any problem. Doctors and midwives don’t mention the nuchal cord during delivery and just slip the cord over the baby’s head during childbirth. It is medically proven that unless there is a dire consequence posed, the cord should be left alone during birth, to avoid complications.

There have been instances when babies have the cord wrapped around their neck multiple times and are still fine given the design of a healthy cord. Only one in 2000 birth cases have a “true knot” in the cord which poses grave risks. In most cases, the cord is harmless and does not tighten even during childbirth to pose any danger.

How Common Are Nuchal Cords?

Proven medically, nuchal cords are very common, and about one in every three foetuses has this condition. Babies born under these conditions are perfectly healthy unless there is a serious complication with the cord. Most medical practitioners cannot tell if the baby has a nuchal cord even after looking at an ultrasound.

Causes of a Nuchal Cord

Unborn babies are little gymnasts in their mother’s womb. Pregnant mothers do enjoy their moves, kicks and butts, but these movements could also lead to a nuchal cord. There are also other proven biological and medically ascertained reasons as to why a cord may end up around the baby’s neck. Let’s take a look at them.

Wharton’s Jelly is a soft, gelatinous substance protecting the blood vessel inside the cord. It protects the cord against compression and too much of knotting due to the baby’s movement. If the jelly is present in insufficient quantities, it could lead to a nuchal cord.

2. Excess of Amniotic Fluid in the Sac

Since the foetus floats in the amniotic fluid, the knots do not affect the foetus. However, if the amniotic sac is filled with too much fluid, it could pose some amount of risk.

4. Having More Than One Foetus (Twins Or Multiples)

The presence of two or more foetuses means an equal number of umbilical cords. With the movement of two babies in the uterus, the possibility of cords getting entangled with each other is more. This does not pose a great risk unless the twins share the same amniotic sac, in which case they could have the umbilical cord getting entangled to a certain degree, and the cords could get wrapped around the neck of the other twin or their own. If the baby tends to move a lot in the uterus, there are chances that the cord could get entangled around the neck. As the gestation period increases, the probability of a nuchal cord increase.

Now that we know the causes of a nuchal cord, let’s also take a look at the symptoms.

Symptoms of Umbilical Cord Around Neck

There are no proven signs that suggest the presence of an umbilical cord around the neck of the baby. However, some potential symptoms that denote the baby could have a nuchal cord are:

1. Reduced Movement Of The Baby

If the baby seems to be moving less after 37 weeks of gestation, it could be a possible warning sign of a nuchal cord.

During labour, the foetal monitor detects the presence of a nuchal cord by gauging the abnormal heart rate.

Ultrasound scans could detect if the baby is suffering from hypoxia or respiratory difficulties caused by a nuchal cord. Although a diagnosis is possible, a medical practitioner will not be able to assess the measure of risk associated with it to the life of the baby.

Diagnosis of a Nuchal Cord

Obstetric ultrasound can diagnose the presence of a nuchal cord. An ultrasound scan can also help deduce how many times the umbilical cord has been entwined around the neck. This is, however, dependent on the quality of images achieved. Doctors look at the multiple views of the fetal neck to identify a nuchal cord.

With grayscale imaging, the chances of an ultrasound detecting a nuchal cord are 70%. However, with colour Doppler, nuchal cords can be detected with an accuracy of 83% to 97% via an ultrasound. Nuchal cord ultrasound does give you an idea of the presence of an issue, but no intervention is possible.

The presence of the nuchal cord ascertained by ultrasound is only a possible indication of any complications that could arise in the future. There is no known treatment to get rid of the problem. Doctors keep a close watch on the compression of the umbilical cord during labour or in the weeks leading to delivery to prevent any complications. Doctors recommended c-section in some cases, as nuchal cords can cause birth complications or hypoxia.

When people think of an umbilical cord around the baby’s neck, the first thing that comes to their mind is would it strangle the baby. In the remaining article, we shall address some of these concerns and also share information about complications/injuries due to a nuchal cord.

Possibility of Strangulation Due to a Nuchal Cord

The umbilical cord is about 20 inches long and about an inch in diameter with a loosely coiled appearance. The cord has two veins supplying oxygenated and nutrient-rich blood to the baby, and two arteries carrying de-oxygenated and nutrient deficient blood back to the placenta. Occasionally, the umbilical cord will have only one vein and artery. If the cord happens to be prolapsed, compressed or knotted, the supply of oxygen is reduced, causing asphyxiation.

The nuchal cord can be broadly classified as:

A common prevalence, nuchal cords can entwine and disentangle anytime. Although not known to cause any serious harm in most cases, it could lead to the complications given below.

Complications and Birth Injuries Due to a Nuchal Cord

Potential complications and effects of the umbilical cord wrapped around the neck include:

Umbilical cord wrapped around the neck can cause brain damage. It is caused by the deprivation of oxygen or limited blood flow to the baby’s brain during or near the time of birth. This leads to cell death, subsequently leading to brain damage causing disabilities like cerebral palsy, seizures, developmental and learning disabilities.

It is a condition in which abnormal intrauterine growth causes a foetus smaller than average. Babies with IUGR are at risk of a nuchal cord or asphyxia and are delivered prematurely. It is a medical condition in which the foetus swallows a mixture of meconium (its own stool) and the amniotic fluid, which could also enter into the baby’s lungs during delivery and cause breathing complications.

All the information may seem daunting, and you must think if there is a way to prevent a nuchal cord. Read on to know if there are ways to do so.

How to Prevent Umbilical Cord Around Neck

With the foetus constantly moving inside the uterus, there is no sure way to prevent the umbilical cord from entangling around the neck of the foetus. The cord entwines and detangles several times during pregnancy. Only on rare occasions, when a cord gets twisted many times, does it prove to be a “cord accident”, which is also not preventable while the baby is still in the mother’s womb.

Since all the factors leading to a nuchal cord are uncontrollable, birth complications due to a nuchal cord cannot be prevented or treated. However, there are ways to deal with the complication, especially during childbirth. So, don’t entangle yourself in fear of the winding characteristic of the umbilical cord. Remain calm and unravel every stage of your pregnancy with joy so that your baby will feel the happiness.

Also read: How To Sleep during Pregnancy In Third Trimester – Positions & Safety Tips