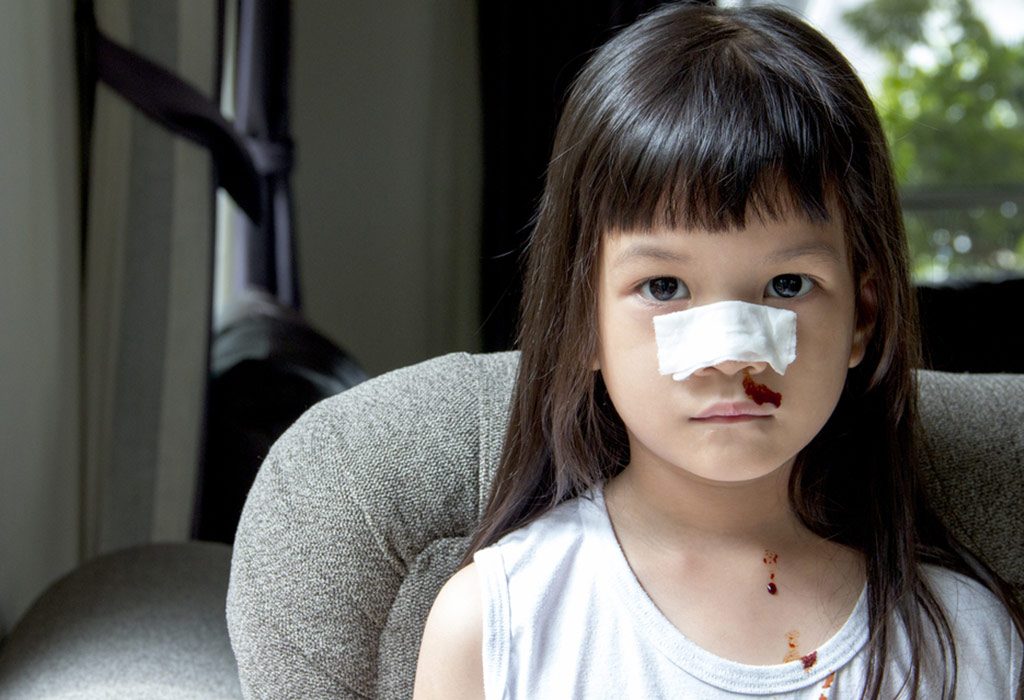 Children between the ages of three to ten are prone to nosebleeds. While it can look serious, in most cases it isn’t. It is important to know what to do when your child has a nosebleed, to help alleviate any symptoms. However, if your child has recurrent nosebleeds or if the bleeding doesn’t subside, you will need to consult a doctor immediately. Here is what you should know about nosebleeds in children.

Nosebleeds, also known as epistaxis, are of two types:

Posterior nosebleeds are rare in children and tend to occur in adults with high blood pressure. Children may have this type of nosebleed only in the event of serious injury to the nose or face. Here the bleeding happens from deep inside the nose and the blood tends to flow down the throat even when the person is upright.

Anterior nosebleeds are where blood comes out of the thin, superficial blood vessels or capillaries that are in the front part of the nose. These are common in children and are harmless.

How to Stop Nose-Bleeding in a Child Causes of Epistaxis in Children

Nosebleeds can be caused due to many reasons. Some of them are:

There is no fixed number of nose bleed events to be labelled as recurrent epistaxis. However, if your child has nosebleeds frequently, you will need to consult a doctor.

Recurrent nosebleeds may also happen if your child has a nose-picking problem. Frequent nose picking can make the lining of the nose irritated and expose the blood vessels, which then tend to rupture very easily.

Diagnosis of nosebleeds includes a thorough physical examination to determine the underlying cause. A specially lighted scope will be used to check the insides of the nose, and a complete medical history should be provided to the doctor. Based on the physical examination, the doctor will determine the seriousness of the condition and the need for imaging like Xrays or CT scan or lab tests like blood tests and allergy tests.

How to Treat Recurrent Nosebleeds in Children

Here are some of the best ways to treat recurrent nosebleeds in children. How to Prevent Nose Bleeding in Kids

To prevent bleeding from the nose in a child, ask your child to stop picking his nose and make sure you clip his nails to prevent injury to the nasal lining. You can also keep humidifiers in your child’s room to lower the chances of dry air. If your child gets frequent nosebleeds, you can also check with your doctor about using saline nose drops to maintain moisture in the nose.

You will need to call the doctor if:

If you encounter nosebleeds in your child, don’t panic as most nosebleeds are virtually harmless. Follow the required steps to stop the bleeding. If it continues even after 20 minutes, you will need to take him to a doctor for further diagnosis. However, make sure not to panic, as that will only make your child worry.