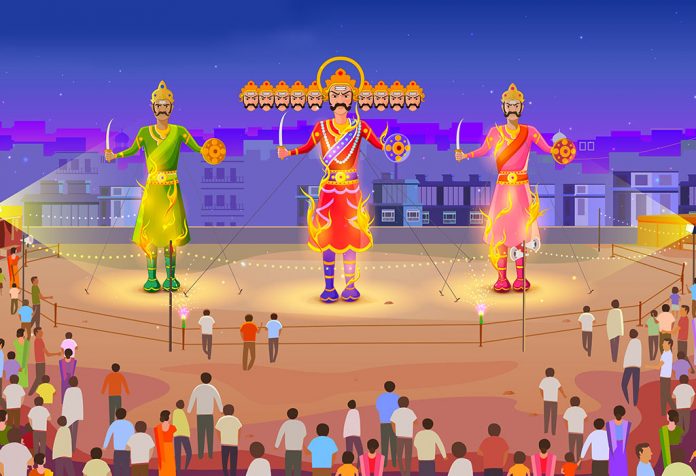 Normally, the second half of the year in India is full of celebration and festivals, with so many being celebrated within weeks of one another. It is a great time for families because, in many parts, they come together from all over the country in unison to celebrate the festive season.

Video: Fun Facts about Navratri and Dussehra For Kids

Navratri is a festival celebrated by Hindus. It is also known by other names in different parts of the country, including Chandra Darshan, Sindoor Tritiya, Chandi Path, Kumari Puja, Sandhi Puja, Mahagauri Puja, and Ayudha Puja, among other names. There are certain rituals which are observed in different parts of the country during this time. Each region or state has their own ways of celebration and the duration also differs from place to place.

Why and When is Navratri Celebrated?

A festival that is celebrated by those who follow Hinduism, Navratri is celebrated for different reasons in different parts of the country. It is also known as Durga Puja, whereby devotees pay respects to Goddess Durga and her nine avatars. ‘Nav’ means nine and ‘ratri’ means night; hence, the name. There is also the aspect of the nine colours of Navratri, each colour assigned to a specific day, depicting each incarnation of the Goddess. In the North, the celebration is in honour of Lord Ram and his triumph over Lankan King Raavan, who kidnapped Ram’s wife; in the North East, they pray to Goddess Durga and her triumph over evil in the form of the demon Mahishasura.

This year, Navratri began on 10th October and will end on 18th October. In theory, Navratri actually falls from 2 to 4 times in a year, although the most celebrated one is Sharada Navratri which is celebrated after the monsoon season. The exact dates for the festival change slightly every year and depend upon the Hindu luni-solar calendar.

How Do People Celebrate Navratri Across India?

Here’s how people celebrate the festival in different parts of the country:

In Eastern India, Navratri is known as Durga Puja. Here, for days together, states like West Bengal, Odisha, Bihar etc. overflow with people. They venerate Durga Ma and celebrate her triumphant slaying of the evil demon Mahishasura. There are massive pandals, or stages, that are constructed across the state. For eight days, idols are decorated before they are immersed in the sea, to signify Her return to Kailasa.

In the North, Navratri is observed in the month of April in some places where people fast for nine days. It shouldn’t be implied that they do not eat at all during these nine days; they just abstain from wheat and rice. This practice is said to improve the digestive system.

The festival is again live in October, and celebrates Lord Ram and his triumph over the Lankan King Raavan, who kidnapped his wife, Sita.

The Navratri story for kids is best explained to them through the Ram Leela. For nine nights, people stay up and chant prayers praising Lord Ram and enjoy plays that celebrate his story. On the tenth day, a massive effigy of Raavan is burnt with much pomp and show, with crackers. In Western India and parts of Gujarat, the festival is celebrated with dandiya or garba. It is a traditional dance between women and men, and it is called the “sword dance” because it represents a mock battle between Goddess Durga and the demon.

In Southern India, the festival is known as Ayudha Puja where people celebrate and pay respect to their instruments. Here, vehicles, books, and musical instruments are kept in front of the deity and smeared with holy ash or sandalwood paste. In several parts of different states in the South, people also have a unique exhibition of decorated dolls within their homes that last for all nine days. Dussehra is a festival celebrated largely across the North, in honour of Lord Ram’s triumphant victory against Raavan. It’s the final day of the Navratri festival and ends with many effigies of the ten-headed Raavan being burnt down to the ground.

Why and When is Dussehra Celebrated?

Dussehra is generally celebrated around mid-October (almost towards the end of the month) and marks the tenth day of Navaratri. It is celebrated to commemorate Lord Ram’s victory over Raavan after he kidnapped his wife, Sita. The two armies fought fiercely for days before Lord Ram victoriously slew Raavan and saved his wife from the clutches of evil. It’s a great piece of Dussehra information for kids to learn and remember. In some parts of Himachal Pradesh, the festival culminates on the tenth day of the rising moon, i.e. Vijayadashami. The history of this festival dates back to the 17th Century when the local King, Jagat Singh installed an idol of Raghunath in his kingdom, Kullu. This deity was declared as the ruling Lord of the entire valley.

How Do People Celebrate Dussehra Across India?

Here are a few Dussehra facts for kids that you could teach them by showing them how the festival is celebrated in different parts of the country:

As mentioned before, Dussehra is celebrated as Durga Puja in the East. The number of days and certain traditions differ from state to state. Women apply sindoor on their foreheads and on the forehead of the Goddess they pray to. The festival or the puja is conducted on the days of Sashti, Saptami, Ashtami and Navami with the puja culminating on the final day of Dusshera.

Apart from burning of effigies, in the northern states, especially in the Kullu Valley of Himachal Pradesh, there is an internationally renowned Dusshera celebration called Kullu Dusshera. Here, the festivities start on the tenth day and continue for another seven days. This commemorates the day on which the idol of Lord Raghunath was installed on the throne by the local king Jagat Singh.

In Gujarat, Garba is a folk dance that is played during all the nine days of the festival. People dance to folk tunes after offering their prayers to the deity of Durga. In Mysore, the festival sees a lot of prominence in the wonderfully lit Mysore Palace. The city also burns down effigies of Kumbhkaran, Raavan and Meghnath. Here too, idols of Goddess Durga are carried atop elephants from the palace to the Mantapa, or pavilion, as devotees pay their respects during the journey.

Thus, Navratri and Dussehra are celebrated wholeheartedly across the country. While they have different forms, the ultimate celebration is that of good over evil and the triumph of balance in the world.

Diaper Doldrums or Happy Nappy? What Will You Choose?

Postpartum Perineal Pain – Cause and Relief

Ruchelle Fernandes - May 14, 2021
Sushi is a very popular meal among children, and for a good reason. From lunches to being a part of your child’s birthday party...