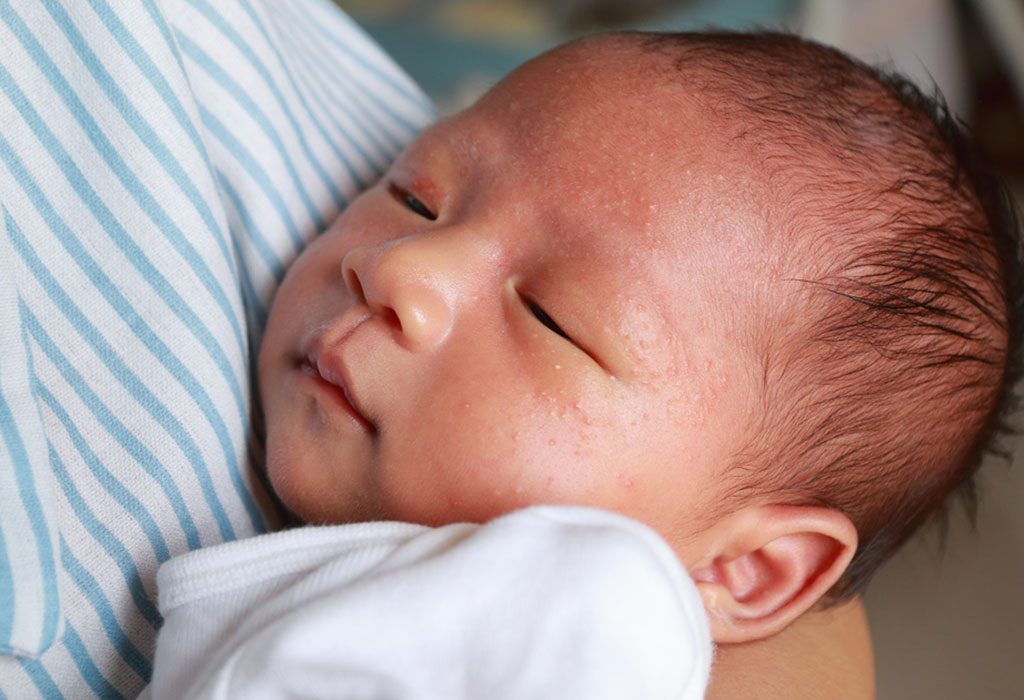 When including new foods in your little one’s diet, following the three-day-rule and introducing one food at a  time should help you understand whether or not your baby is allergic to a food. Now that your baby has started on solids (or semi-solids), you might want to develop their taste palate by making them try new food twice a week, but you can never predict which food will have what kind of effect on their body. It is therefore important to be careful and consult a doctor immediately if there is any sign of adverse reaction or allergy from a food item. Surprisingly, milk is also one such food that may trigger an allergic reaction in some babies. Read on to know about milk allergies in babies, its causes, symptoms, and more!

What is Milk Allergy?

Milk allergy is a condition where the immune system perceives a threat from the protein content in cow’s milk, the base for most baby milk powder products, and overreacts to it. This effort of the baby’s immune system to fight the threat causes an allergic reaction and triggers the release of chemicals like histamine.

How Common is Milk Allergy in Babies?

Milk allergy is not very common in babies. Only two to eight per cent of babies under the age of one year are allergic to milk. The allergy corrects itself in most cases by the time the baby is three years old, but it can last up to six to eight years in some cases. Rarely, the allergy continues up to adulthood.

Can Breastfeeding Babies Have Milk Allergy?

Causes of Milk Allergies in Infants

The major cause of allergy from milk in infants is the administration of formula-based milk which contains cow’s milk protein. Other causes of allergies in infants include:

Symptoms of Milk Allergy in Babies

The symptoms of milk allergy might appear within the first few days of breastfeeding. The symptoms may also appear after the introduction of formula-based milk to your child. Following are the symptoms of allergy in babies:

In some cases, the allergy may also lead to a severe allergic reaction known as anaphylaxis which can adversely affect the baby’s blood pressure, skin and breathing patterns. While the two are often misunderstood to be one and the same, there is a difference between milk allergy and milk intolerance.

Milk allergy is caused due to the immune system’s counteraction on the protein in the milk. Intolerance, on the other hand, is a situation where the digestive system of a baby is unable to digest the sugar (known as lactose) in the milk.

The symptoms of milk allergy include vomiting, diarrhoea, rashes, coughing and wheezing, whereas symptoms of intolerance to milk include gas formation, bloated stomach, irritability and inability to gain weight. Congenital lactose intolerance is extremely rare. Intolerance from lactose is more likely to occur in adults, whereas milk allergy corrects itself as the child grows.

If your baby shows symptoms of milk allergy, you should consult your doctor immediately. After understanding the symptoms and examining your baby, the doctor may conduct blood and stool tests to understand the root cause of the problems. In order to diagnose milk allergy, the doctor can also perform a skin test by dropping a tiny bit of milk on the skin, pricking the area to make a small scratch, and then observing how the skin reacts. This will help the doctor to conclude whether or not your baby is allergic to milk.

In order to eliminate the possibility of milk allergy, your doctor might suggest some of the following alternative options for feeding your child:

A hydrolysate formula, where the milk proteins are partly broken down to contain the immune system from reacting, may be suggested to replace formula-based milk.

The doctor might suggest that you remove dairy products from your diet so that it does not pass on to the child via breast milk.

3. For Infants That Are Above the Age of One

In cases where the allergy is in infants above the age of one, the doctor might ask you to reduce or stop feeding milk to the child and observe if there is any improvement in the allergy, before deciding on an effective, permanent solution.

Precautions to Take While Giving Milk to Your Baby

In order to reduce or eliminate the risk of allergy, you should keep in mind the following precautions:

You should call the doctor if you notice any signs or symptoms of allergy in the baby. Do not wait for it to correct by itself and do not try home remedies before consulting your doctor. Every change in the diet of the baby should be well-discussed and approved by a certified professional.

1. What If My Doctor Tells Me to Stop Breastfeeding?

Sometimes, a doctor may suggest that you wean the baby to a modified formula in order to safeguard a baby with a milk allergy. While there is no evidence that an industrial substitute will be as effective or better than mother’s milk, a good diet can help the baby get the same nourishment as they would get from the mother’s milk.

2. Can I Use Probiotics?

Though more scientific research is needed on the topic, probiotics are known to have positive health benefits and might help reduce baby allergy to milk.

In case your baby suffers from an allergy, a doctor should be immediately consulted. Ensure to follow the prescription from the doctor. No food that can exaggerate the situation should be given to the child.

Paying close attention to the baby’s reaction to the foods introduced, and being careful about avoiding foods that disagree with the child when drawing up a meal plan, can go a long way in avoiding any undesirable episodes.