Home Pregnancy Prenatal Care Migraines During Pregnancy: How to Deal With it? 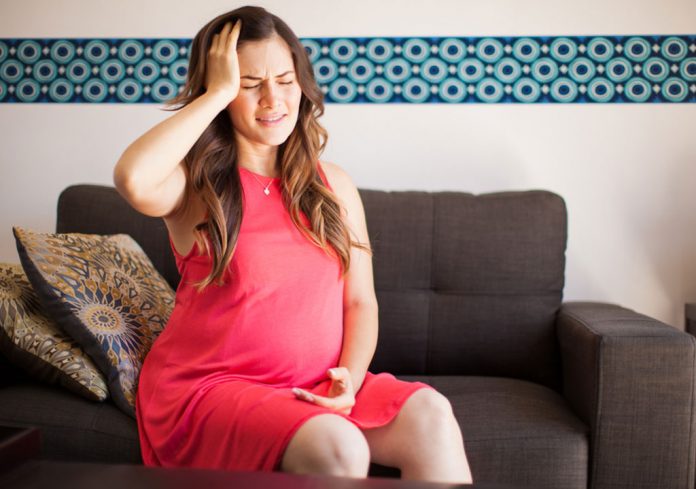 Pregnancy is like a roller coaster ride with numerous ups and downs. Witnessing the miracle of creation with your partner and feeling of a deep connection with your unborn child can have you filled with excitement. This abundance is checked by the challenges you need to face as a mother. While there are many symptoms that all women experience, such as mood swings and fatigue, there are others that only afflict a few. One of them is a migraine.

What Is a Migraine?

A migraine is classified as a headache that causes difficulties in a person’s functioning. Migraines can be high enough to make a person feel like vomiting, induce nausea and even cause blurred vision. They are thought to be the result of abnormal brain activity that temporarily affect nerve signals, chemicals, and blood vessels in the brain.

Is Migraine Common During Pregnancy?

The likelihood of you getting a migraine during pregnancy is a game of chance. Unlike some of the symptoms associated with pregnancy, such as mood swings, not every pregnant woman gets a migraine. However, it is estimated that about 16% of women who get migraines get their first one during pregnancy, making it a universal phenomenon. It is tough to predict what is in store for them in the future. 75% of the women who experience migraines during the first trimester can feel a noticeable improvement as the pregnancy progresses. However, there are other women whose migraines do not improve and recur throughout the pregnancy.

Who Is More Prone to a Migraine?

The sad truth is that most doctors are unsure as to what is the exact cause of migraine. However, there is no shortage of possible explanations. The most popular theory says that certain inputs can activate brain cells to the point of overstimulation. This causes a chemical to be released that causes inflammation in the blood vessels in the brain leading to pain.

While there is no concrete evidence to suggest the above theory is correct, a study conducted has found a link between a chemical in the brain called serotonin and migraines. However, the relationship itself between the two is little understood. Signs and Symptoms of Migraines

Track Triggers With a Migraine Diary

Every individual is different, and it’s important to keep track of what can trigger a migraine attack for you. Some of the common triggers include:

These findings can then be used for your treatment which will be discussed in the treatment section.

Your doctor can deduce a migraine through a combination of a physical exam, medical history and listing of the symptoms experienced. In case the migraine is unbearable, an MRI or CT scan can be considered.

Unfortunately, many untruths are spread about migraines. While some of the causes are misunderstood, people make their conclusions without any scientific basis. Below are some baseless myths:

Can Migraine Affect Pregnancy or the Baby?

A research study presented at the American Academy of Neurology has painted a bleak picture for expecting women with severe migraines. It said that those pregnant women who have severe migraines towards the end of their pregnancy might have complications like premature births or preeclampsia.

Treatment of Migraines During Pregnancy

Most women may be hesitant to try out this route as they fear that it could affect the foetus. This can make sense as some of the conventional medication for treating migraines may have this effect. However, medicines have different classifications, and there are those that have been certified as foetal risk-free. Some of these drugs include Tylenol, Reglan and Advil. However, these drugs are okay to take in limited quantities only during the first and second trimester. To be on the safe side, consult your doctor before consuming these medicines.

Medication isn’t the only way to treat a migraine. You can create a logbook where you can chronicle the triggers that are associated with a migraine. For example, after you eat cheese, you notice the onset of a migraine. Keeping track of this event helps you understand that cheese is one of the suspects that you could avoid in the future. You can make a note of the duration of the migraine attack, so you know how long you must contain a migraine. This way, if you feel you can endure a migraine without the use of medication, then you can try a non-medicated approach such as taking a nap.

3. Listen to Your Body

Train yourself to listen to your body. While not all migraines have a slow build-up, the signs and symptoms often appear before the attack. Getting yourself attuned to these small warnings can help you manage a migraine.  If you’re stressing out too much and know that it’s one of your triggers, you could take evasive action immediately. This could be as simple as forcing yourself to take a break by listening to music or watching a funny movie. The aim is to pre-empt a migraine before it becomes unbearable. The best way to get migraine relief while pregnant is from the comfort of your own home. You may try these remedies for some relief from migraines during pregnancy:

Prevention of Migraine During Pregnancy

Also known as prenatal yoga, it not only helps in toning the body but helps to increase your powers of meditation. The breathing technique employed during yoga, known as ‘ujjayi’, helps to focus all your attention on your breathing. This becomes helpful when dealing with stress attacks that lead to migraines. As you feel the stress build, you can start with ujjayi and nip a migraine in the bud.

Cheese, especially aged cheese, is known to contain a harmful ingredient called tyramine. While there is an established link between the chemical tyramine and migraines, its exact relationship is not understood. Some experts think that tyramine forces the brain to create a chemical called norepinephrine which causes headaches.

The body needs enough glucose to function properly, and a shortage of it affects the brain leading to a migraine. Women who skip meals or try to fast during pregnancy would then inevitably get a migraine due to the low blood sugar. Even irregular meals can have the same effect. Having rich foods can have the same effect as the body produces excessive insulin to bring the blood sugar down, leading to a ‘sugar crash’.

Staying up late nights and not getting those precious eight hours of sleep can bring about a migraine. Researchers at Missouri University conducted a study where it was found that sleep deprivation can lead to the secretion of proteins that can trigger migraines.

A migraine during early pregnancy is normal and does not require a visit to the hospital. However, if a fever accompanies a migraine, it could be an indication of an underlying condition. There are chances that it could be a stroke, meningitis or encephalitis. Any sudden increase in weight or bloating in the hands and face may be a sign of preeclampsia.

Migraines can be a major inconvenience in an already challenging situation, but it is something that can be controlled. The chronicling of triggers unique to you in your diary and the prevention methods mentioned above can help you avoid and control severe headaches to a large extent. Even if you are unable to do much about the pain, you can take solace in the fact that, in all probability, you will only have to endure it for the initial part of your pregnancy.

Ambanis Have Big News – Akash and Shloka Are the Newest Parents on the Block!