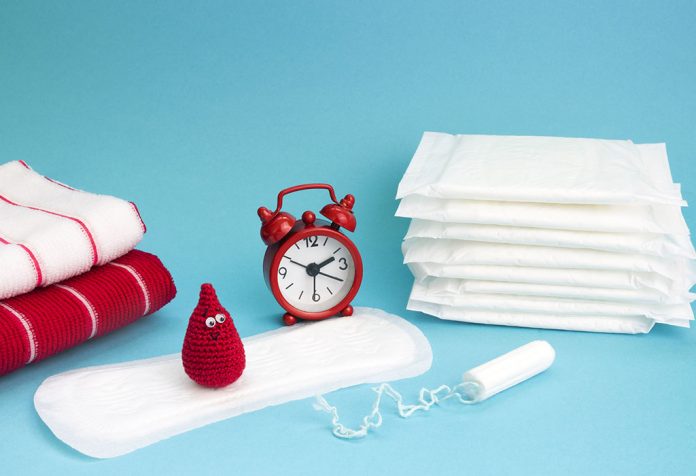 Once you enter puberty, your body will mature rapidly and go through a lot of changes. There are physical changes including the development of breasts, pubic hair and more importantly, menstruation. Every girl starts her menstrual cycle during this time; however, the exact time will vary based on various factors.

Every month your body prepares your uterus for pregnancy. This process involves lining the uterus with tissue and blood in preparation for implantation of the egg. Menstruation takes place when this lining sheds and exits your body through the cervix and your vagina. You will bleed out blood and tissue during this time and it will last for an average of 3 to 5 days.

What is Menstruation Cycle?

What Happens during The Period Cycle?

The menstrual cycle has four phases that take place over the course of the month.

This is when the lining built in the uterus sheds and you begin to bleed. This phase lasts for 3 to 5 days and maybe longer in some women. Many menstruating women experience certain symptoms that include, but are not limited to, cramps in the abdomen, backache, pain in the leg, mood swings, breast tenderness, etc. You may also few very tired and face a general lack of energy during this time.

This is the phase when your body is preparing for ovulation. A hormone known as FSH (follicle stimulating hormone), stimulates the ovaries and leads to the production of a matured egg. This process also releases hormones like oestrogen and progesterone which prepare the uterine lining in anticipation of an impending pregnancy. This thick lining is created to provide nutrients and blood to the foetus.

During this time, since there is a rise in your oestrogen level, you may feel energetic and have a brighter mood. You may also notice some white discharge during this time, which is completely normal.

Ovulation happens when the ovaries release the mature egg and it begins to travel through the fallopian tube into the uterus. This egg can only survive for 12 to 24 hours. Within this period, if the egg comes in contact with a sperm, it gets fertilized. These are the days when your fertility is at its peak. You will need to take care to use protection if you are engaging in sexual intercourse during this time.

The high levels of oestrogen produced in your body during this period will give you a boost of energy, mood, and even your sex drive.

This phase marks the end of the menstrual cycle. Once the egg moves down the fallopian tube and into the uterus, your body begins to produce progesterone which further builds the uterine lining. However, if the egg isn’t fertilized there will be a drop in the level of oestrogen and progesterone. Also, since the uterus does not need the lining as there is no implantation of an egg, it begins to sheds it. This is when you enter into a new cycle. How Do Hormones Work?

The menstrual cycle is regulated by various hormones that are produced in different parts of the body.

On a normal day, the cervix produces thick mucus that the sperms cannot penetrate. Before ovulation, the oestrogen hormone changes this thick mucus and makes it thin. This allows the sperm to swim through into the uterus to fertilize the egg.

The follicle in the ovary, after the egg is released, turns into what is called the corpus luteum. The corpus luteum is a yellow mass of cells which is responsible for the production of the progesterone hormone. Progesterone turns the mucus thicker again and makes it difficult for sperms to penetrate. During this time you may notice that your vaginal discharge is thicker and stickier.

The progesterone also prepares the uterus walls for implantation of the egg by creating a thick lining of blood and tissues. With a rise in the level of progesterone, your breasts may also feel a little stretched and you may experience a tingling sensation in them.

After ovulation, the pituitary gland stops producing the FSH hormone to prevent any more eggs from maturing.

What Happens If Fertilization Takes Place?

If the mature egg released from the ovary is fertilized by a sperm in the fallopian tube, it travels into the uterus and implants itself on the lining. The time taken by the egg to travel from the ovary to the uterus may be anywhere in between six to twelve days. During this time, the egg has only 150 cells. You may also begin to feel early symptoms of pregnancy as the progesterone levels continue to rise in your body.

What Happens If Fertilization Does Not Take Place?

In case fertilization does not take place or in the event that the egg does not implant on the walls of the uterus successfully, the egg begins to disintegrate. The corpus luteum also shrinks and the level of oestrogen and progesterone in your body will begin to drop.

Your uterus produces a chemical called prostaglandins, which will change the blood supply to the uterus, break the lining created on the uterine walls and contract your uterus. This is when the lining sheds along with the unfertilized egg and your periods start.

A typical period involves bleeding through your vagina for about 3 to 5 days. Bleeding may last for shorter or longer periods for some women. The menstrual flow or the amount of blood that comes out of the vagina can be classified as a heavy, moderate or light flow. This differs from woman to woman. The bleeding during menstruation may last longer in the first few years and will tend to get regularized with age.

There may be several problems that come along with your periods apart from the cramping, premenstrual syndrome (PMS), aches and body pain.

This is characterized by heavy bleeding that may last from five to seven days. Menorrhagia is caused due to an imbalance in the hormone levels like estrogen and progesterone. Vaginal infections, inflamed cervix, hypothyroidism, uterine fibroids, etc could also cause the condition.

Also called absent periods, here, you don’t get your periods for different reasons. Primary amenorrhoea is when you don’t menstruate even if you are 16. This may be due to a delay in puberty, congenital defects in the reproductive system or issues with the pituitary gland. Secondary amenorrhoea may be due to hyperthyroidism, anorexia, ovarian cysts, pregnancy, stopping birth control or sudden gain or loss of weight.

Dysmenorrhoea can cause you to experience severe pain during your periods. While cramping is normal during PMS as the uterus contracts and expands, women with dysmenorrhoeal experience excruciating pain. This may be due to inflammation of the pelvis, fibroids, or endometriosis (abnormal growth of tissue in the uterus). When Does A Girl Usually Get Her First Period?

The first period usually starts between the age of 10 to 12. But some girls may get is as early as at 10 years or it may get delayed until they are 15 or 16. The age of the first period may also be dependent on when the mother got her first periods. It is also noticed that periods are likely to start about two years after the breasts and pubic hair develop in the girl.

When Does Menopause Start?

A woman is said to be in menopause if she hasn’t had her periods for over 12 months. The average age for women to hit menopause is between 40 and 50 years. However, some women enter menopause in their 30s and others don’t get menopause until they are well in their 60s.

How Often Should You Change Pad/Tampon?

You need to change your pads every four hours to avoid infection and bacteria build-up. If you are using tampons, it is best not to wear it over eight hours in order to prevent TSS or toxic shock syndrome (a condition caused when tampons are left for longer than eight hours which may cause bacteria to make toxins or poison). Sponges and menstrual cups can be changed once or twice in a day based on the quantity of your flow.

It is important to use products which are appropriate for the amount of your bleeding. You can also use different products on different days, as your menstrual flow changes as your periods progress. When Should You Consult A Gynaecologist?

You will need to consult a doctor under the following cases:

Menstruation is an important milestone in a woman’s life as it prepares her body to be able to conceive and bear children. It is important to understand how your menstrual cycle works in order to stay informed and protected as you begin your journey into womanhood.

Let Children Be Their Own Role Model! – Don’t Compare Your Child

ABA (Applied Behavioral Analysis) Therapy – How Can It Help Your Child?