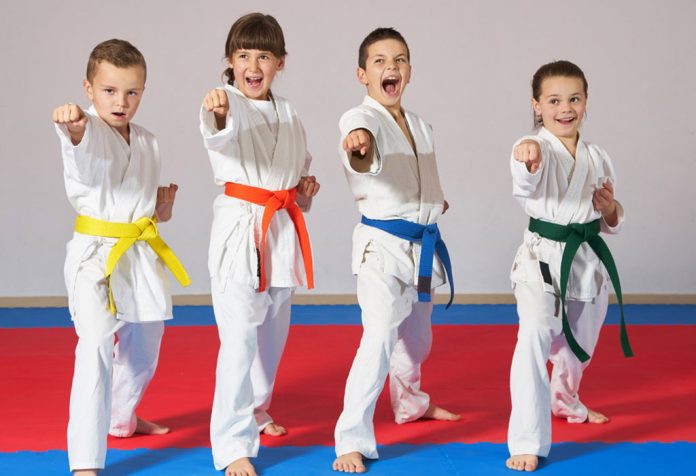 Young kids are usually bursting with energy. A great way to productively channelise this packed energy is to enrol them in martial arts training. Some parents fear that martial arts may encourage aggression and violence in kids. But this concern is baseless and has no logic.
Martial arts like Kung Fu, Aikido, Taekwondo are not only fun activities for young boys and girls, but they may also help promote physical fitness and mental strength in children. In fact, children who have attention-deficit hyperactivity disorder (ADHD) have reported considerable benefits by joining these training classes.
The lessons of respect, discipline, and concentration that a kid learns from these classes ultimately may groom and shape his personality. These lessons may also carry over to school life, helping him to perform better academically and achieve success.

What are Martial Arts?

Martial arts are a traditional system of combat practices which aim at training the body, mind, and spirit to function in sync. To simply put it they can be perceived as fighting arts. Martial arts endeavour to strike a harmony between the mind and body along with teaching effective methods of self-defence.
Martial arts for children promote the all-round development of a kid by developing the mental abilities, spiritual strength of the child along with his physical capabilities.

At what Age can a Child Start Martial Arts Classes?

According to experts, six years is an appropriate age for teaching martial arts. By that age, a kid should have ideally developed enough muscle strength and control to apply the various techniques of martial arts like punches, kicks and so on.
Nonetheless, there are certain schools that offer martial arts training for even younger kids. But then the emphasis may be more on entertainment than organized training. Hence, their programs are generally game based. Some institutes also run classes for preschool kids. The focus is more on developing skills like hand-eye coordination and improving the attention span. Some parents may be hesitant to enrol their kids for martial arts classes because of the fear that it can make their kids violent and hostile. But experts say this is a misconception. On the contrary, martial arts may help in making a child more self- disciplined, respectful and social. The child learns to exercise self-control while effectively defending himself with the self-defence techniques of martial arts.

Significance of the Belt in Martial Arts

The progress in martial arts classes is assessed and awarded by the belt system. A kid is required to clear many skill levels and is awarded a coloured belt after he completes a level. Thus, a trainee begins with a white belt and after completing different ability levels finally attains the black belt. A kid is evaluated for the next new level usually after every three months. The numerous benefits of martial arts training for kids are listed below:

There are different forms of martial arts training for kids but some of the best ones are:

Martial arts training may help in facilitating the mental, spiritual and physical development of a child. It is sensible to select an institute that follows the inherent principles of martial arts training in its original form than those that try to dilute or alter them. Therefore, it may not be wise to send your child for a class that blends Kung Fu with kickboxing.

Signs That Your Baby Will Walk Soon

Urine Leakage During Pregnancy – Is It Normal?