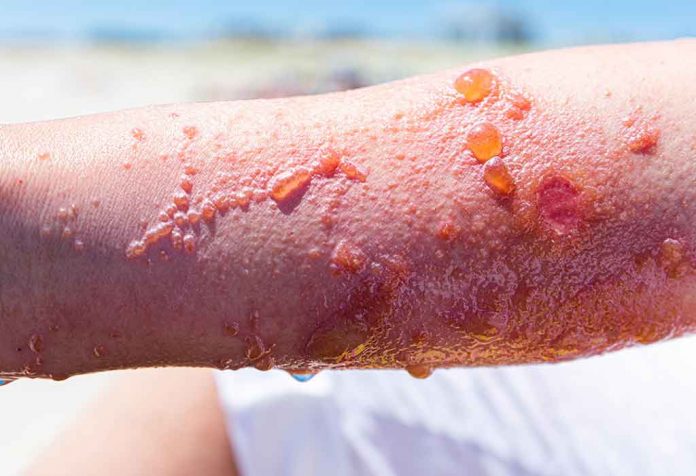 What Is Poison Ivy?

Native to Continental  America, Poison Ivy develops as low shrubs or, in most cases, as vines. This flowering plant thrives along wetlands, forests, coastlines, and even in parks. Since they only require partial sunlight to grow, these plants can best be found where the ground has been disturbed. The entire makeup of this toxic plant consists of flowers, berries, buds, and leaves, wherein the leaves are thought to be the most dangerous.

Urushiol, found in the sap of the poison ivy, easily clings to various surfaces when it comes into contact with them. Besides gardening tools and equipment, it can also cling to your skin, pet fur, your clothes even through indirect contact. Once the urushiol (the oil of the poison ivy) bonds with our skin, our body violently reacts to it in the form of a dreadful rash that soon spreads to the rest of the body.

Some of the causes for developing poison ivy rash are-

Exposure to poison ivy can lead to severe inflammation within your body, resulting in activating your immune system.

Depending on the place of your contact with the poison ivy, the rash will take around 24-72 hours to develop. These rashes can prolong up to three weeks from the day of contact but usually peak during the first week. Rash developed from contact with a poison ivy plant or a poison oak can look blotched or like red raised skin blisters. Nevertheless, if you are still in contact with poison ivy, new patches of rashes can develop fast.

Signs and Symptoms of Poison IVY

If the poison ivy rash has infected you, here are the signs and symptoms that you need to look out for-

Most times, the severity of your affliction rests on the level of urushiol you were in contact with. Absolutely not! Poison Ivy does not spread from person to person. However, the oil of the poison ivy can attach itself to various surfaces causing rashes. The rash in itself is not contagious and does not spread to other parts of the body. If it does spread, it can be because of your continued interaction with the plant oil or delayed reaction.

Being in direct contact with the poison ivy plant or its oil can heave several complications. We have listed down a few of those below.

Generally, the diagnosis is based on the symptoms exhibited by the affected person, including blistering, redness of the skin, intense itching, crusting of the skin, and the like. It helps if the person consults a doctor upon observing the symptoms. This will aid in accurate diagnosis as both poison ivy rashes and psoriasis seem to have similar characteristics when determined by an untrained eye.

If the poison ivy rash has infected you, you can treat it yourself. There is not much you need to do because of its ability to downplay the severity and clear itself within three weeks. However, if your symptoms are severe and do not look likely to reduce, you need to consult a doctor immediately to remove poison ivy from the skin. Severe symptoms can include difficulty swallowing when the rash covers a better part of your body, rash spreading on your face or private areas, and/or inflammation of the rashes. Here are a few treatment plans that you can consider once infected-

Apply calamine lotion to your skin as it can reduce itching.

Anti-inflammatory pain relievers like Advil and ibuprofen can help soothe your rash.

The application of OTC steroid cream in the initial stages can reduce the severity of the rash.

Home Remedies to Get Rid of Poison Ivy Rash

The ability of the finely grounded oats to bring temporary relief to itching is taken into consideration and often used as a medium for treating several skin conditions, including rashes.

Throughout centuries, the application of aloe vera on burn victims has been well-reasoned. What many do not know is that aloe vera also has certain properties capable of providing relief to skin itching and inflammation, making it a valuable product.

Methanol is prominently known for its cooling properties on inflamed skin. Essential oils, which include menthol-like peppermint essential oil and others, can be diluted in regular oil or lotion and left to relieve the irritated skin.

Apple cider vinegar is the immediate go-to for most people when they want to get rid of poison ivy bumps on their skin. Anecdotal evidence alludes that the vinegar solution sears the oil of the poison ivy plant, which accelerates the healing process.

Application of Witch Hazel directly on the skin can reduce inflammation and burning. Witch Hazel has been involved in protecting your skin against damage and also wards off any infection, proving it to be a strong ally.

Cold compresses are amazingly helpful when it comes to itching and swelling. All you have to do is pour cold water or keep ice cubes on a clean cloth and compressing it on the affected part several times a day for around 15-30 minutes.

Washing your skin in rubbing alcohol within an hour of being in contact can get rid of poison ivy quickly. Alcohol removes the oil of urushiol from your skin can either help you avoid a severe breakout of rashes.

Cucumber slices on top of the affected skin can ease swelling and skin irritation.

The mixture of bentonite clay and water, made into a paste, has reportedly been known to relieve and reduce inflammation of the affected body.

Sodium bicarbonate has been proven to give relief to poison ivy rashes when mixed with water.

Here are some tips which can help you prevent getting infected by the poison ivy plant.

You have to consult a doctor or seek urgent medical help, especially when-

Urushiol can remain potent for weeks at a stretch, so you must rinse your skin with water and a good soap to remove yourself from any lingering oil. It is always better to take preventive measures when you venture out into the forests than to risk your health.

Tiredness and Fatigue During Pregnancy

Story of My 9 Magical Months