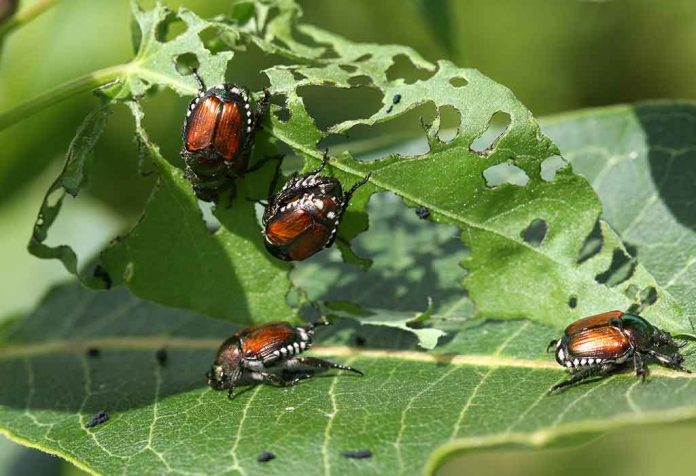 Japanese beetles are notorious bugs that are responsible for feeding on garden and house plants. And if total defoliation or skeletonized leaves is what you have noticed lately, there is a strong likelihood that these tiny bugs may be feasting on your plants. Find out how you can identify these iridescent beetles and learn about various ways of getting rid of and preventing them from destroying your plants in the following post…

What Are Japanese Beetles?

Japanese beetles pose a great threat to your plants because these tiny bugs love to feast on green plants. Though these beetles can feed on many plants, these bugs are mostly seen on rose plants. These bugs, primarily found in eastern and midwestern parts of the United States, love to feed in groups, and you can find them active during warm and sunny days, which is why these beetles are active in the summer months.

This variety of beetle was initially found in the islands of Japan only; however, in the early 1900s, these beetles made their accidental way to the United States. And since then, these coppery-winged pests have spread in various parts of the country and have been responsible for massive damage to the crops. 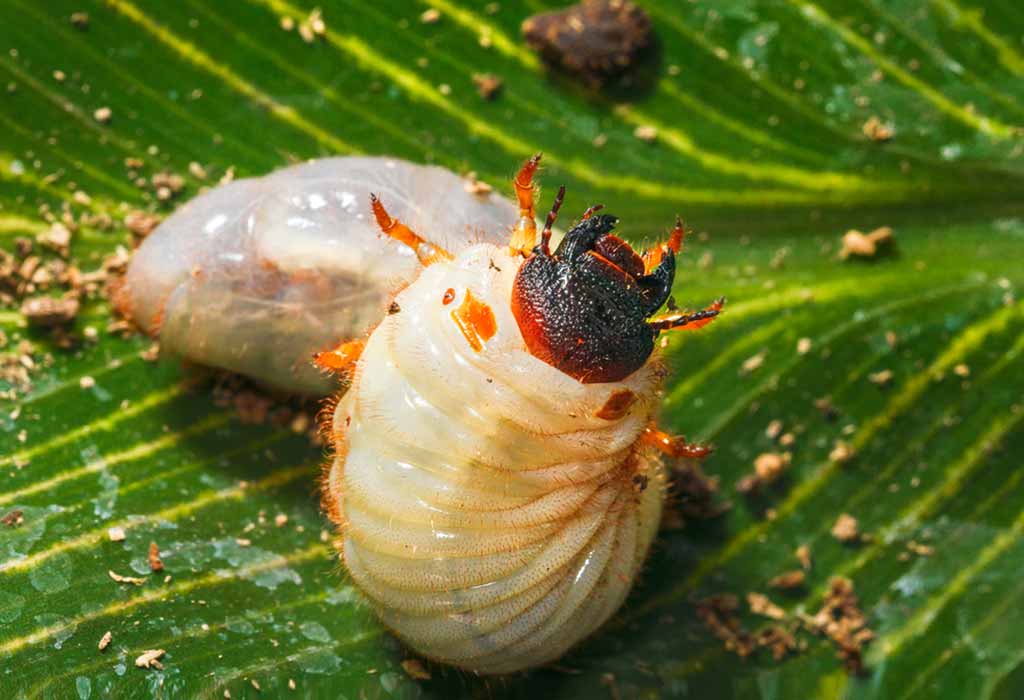 How To Identify Them?

They may be tiny, but you cannot miss them. They are approximately half an inch in length. They have metallic and shiny bodies that are in stunning greenish and brown hues. These beetles lay eggs in the soil in June. The eggs turn into white grubs of approximately ¾ inch length with brown heads. These white grubs stay underground for about ten months, and they keep maturing in the soil. Once they are developed, they come out and start feeding on plants in groups. This is gravely concerning because the damage to the plants can sometimes get out of control. The lifespan of these beetles is around one and a half months, but this is enough of a period for these pests to cover a large area and cause intense damage. The tricky part is that sometimes even after controlling the infestation at your home, these beetles can find their way back from nearby places. Therefore, you have to keep a regular check on your plants to keep them at bay!

As discussed earlier, these pests can damage any plant or crop. However, some plants are more likely to get infested with these beetles than others. Here are some plants that are more susceptible to Japanese beetle:

How to Get Rid of Japanese Beetles in Your House

If you water and fertilize your plants regularly, you can minimize the chances of these beetles’ damage on your foliage. However, it would help if you kept them at bay to avoid any severe damage, and here are some ways you can do that:

It may sound a bit icky, but sadly, this is one of the most effective ways to naturally get rid of Japanese beetles. Though this method can be a little time-consuming and tedious, it works wonders and is very effective. It would help if you prepared a soapy mixture by adding liquid dish soap or detergent in some water in a bucket. After you pick these tiny beasts, you put them in the soapy bucket. This process should ideally be done during the morning hours when the beetles are least active.

Another effective way to deter Japanese beetles is by protecting the plants with row covers, especially when they are active. That is approximately 6 to 8 weeks during the summer months. There is a drawback with these covers because they hamper pollinators; therefore, make sure that you remove these covers after some time to assist pollination.

Using a drop cloth is also an easy and effective way of getting rid of these pests. Place a drop cloth during the morning hours when these beetles are on minor alert; you should shake them off. Discard these beetles in some soap water mixture to kill them.

Neem oil is an active ingredient to kill Japanese beetles naturally! You can get neem oil in the form of spray and spray it on the affected plants. If you wish to get rid of beetles on roses, you should pick up neem sprays containing potassium bicarbonate, as they can prove to be more effective. The neem oil works effectively in not only killing the adult beetles but even destroying their eggs. This happens when adult beetles ingest the chemicals in these sprays and then pass them to their eggs, killing the larvae. Also, it would help if you resprayed after rain for better efficacy. However, one must note that neem oil can be potentially dangerous for aquatic plants and animals. This means that you should refrain from using it on plants close to a water body with marine life.

These kinds of traps work well in controlling a more significant infestation; however, these traps can also attract beetles from places other than your yard. This is because these traps are made with fragrant chemicals such as geraniol and eugenol, which are obtained from plants that are very effective in attracting Japanese beetles and other kinds of insects. When using such traps, make sure that you place them away from your favorite plants to avoid pests or insects landing on your plants.

You can get an insecticide from any garden center that is authorized or approved in your state. Alternatively, you can also use a homemade insecticide with 1 quart of water and adding a teaspoon of vegetable oil into it. Pour all the contents in a spray bottle and give a thorough mix to emulsify the mixture; use this homemade insecticide once every ten days. The critical thing to note here is that sometimes homemade insecticides may harm the plants, therefore, test it first on a small part of a plant and observe it for a day before using it for the rest of the plants. Also, use these kinds of insecticides sparingly to avoid any harm to the plants.

How to Prevent Japanese Beetles

The best way to prevent Japanese beetles from affecting your plants is by keeping them healthy because these beetles are usually attracted to diseased or ripening fruits of most plants. If you are looking for quick fixes that can keep Japanese beetles away, well, that may not be possible, but you can indeed adopt specific measures to prevent these pests from harming your plants. Here are some measures that can prove helpful:

This is a fungal disease that can help prevent these annoying beetles by controlling the larvae population. This happens after introducing milky spores to the soil; the larvae in the soil will start ingesting the spores along with the soil. This is an excellent method for checking beetle infestation in a larger area. However, it is expensive and may take longer to get rid of infestation because spores can take a year or more to establish in the soil. Nonetheless, this is a very effective way of keeping these beetles at bay for an extended period, say up to 10 years or so!

You can choose plants that these beetles do not like or will not get attracted to. Depriving them of their favorite plant food may make these beetles leave their territory and move to other areas.

Sometimes, certain strategies work effectively in keeping these beetles away. You can grow plants such as tansy, rue, or even garlic near the plants affected by Japanese beetles. Planting the plants that repel these beetles will make them move away from the affected plants.

4. Getting Rid of The Grubs

An effective way of keeping these pests away is to nip them in the bud and, in this case, nipping them in the grub stage itself. It would help if you sprayed the affected area with dishwashing and water solution (Use two tablespoons of dishwashing liquid in one gallon of water per 1,000 square feet area) during the later stages of the spring and fall season. Doing so will instigate the grubs to surface on top of the soil, and birds will feast on these grubs. Keep doing the drill every week until you notice no more grubs emerging.

Another helpful and effective way of keeping this annoying problem away is attracting predators who feed on these beetles. Parasitic wasps are beneficial in doing so, well, they are more attracted to larvae, but slowly they will help reduce the beetle population in your area.

The use of nematodes is also beneficial in controlling the larvae population. This method works well if the area is irritated before and after the nematode application and when the grubs are in the initial stages. One of the most effective preparations is the one that contains Heterorhabditis.

These are some ways that you can adopt to prevent Japanese beetles on roses and other plants. However, do not forget that any chemical or homemade sprays that you use to get rid of them can be toxic and harm other vegetation and even other insects in the vicinity, such as native bees, honey bees, and other such pollinating insects. Ensure that if you are spraying or using the insecticides during the flowering season, do it during later morning hours or when bees are not visiting the plants. Also, if you plan to treat a larger area for infestation, then make sure you inform the beekeepers in your vicinity so that they can monitor and protect their colonies from any potential harm.

There is no doubt that these stunning-looking beetles can be quite a nuisance for the plants, but there are many practical measures to help you get rid of and prevent this problem. We are sure that one of the methods mentioned above may help you eliminate this issue in your plants. If you cannot manage this issue on your own, it is recommended to take help from an expert in the field!

Newborn Skin – Common Issues and Skincare in a Nutshell

Why Home Activities Are Important: Making Super Active Kids Use Their Energy