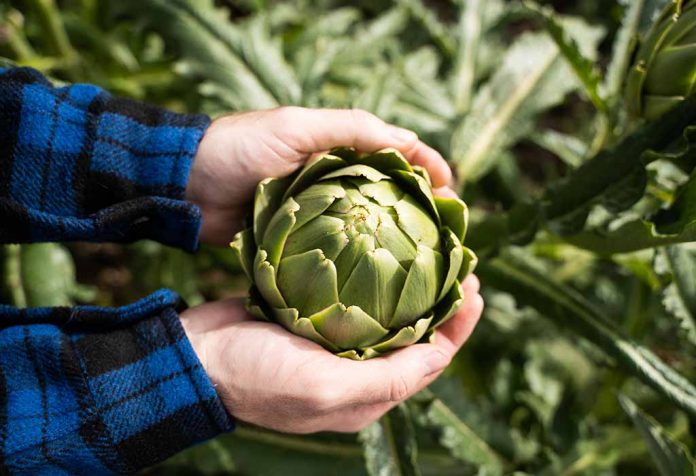 Artichokes are herbaceous perennials belonging to the Asteraceae family, which includes other plants such as dandelions, thistles, and sunflowers. Highly popular in the Mediterranean, these plants are rarely grown in the United States and are considered gourmands, making them very expensive. Luckily, Artichokes are easy to grow. With proper planting, watering, and pruning procedure, you can get a good harvest that you can enjoy without spending a wallop on this delicacy. So how do you go about growing Artichokes, and how do you care for the plant? Continue reading to find out!

What Is An Artichoke

Artichokes, which are scientifically called Cynara scolymus, belong to the same family as thistles- plants considered nuisance weed. People have consumed artichokes from the times of the Greeks and Romans. The leaves of the plant are silver-green in color with a slender arching shape. While they look soft, they are quite sharp and can prick. The stem of the plant is fleshy. The most consuming part is the flower buds that are separated and sold in the supermarkets as artichokes. The base of the buds is the most flavorful of the whole plant and is consumed as a gourmet delicacy. While the immature flower is what is commonly consumed, most of the plant is also edible. In the United States, Artichokes are mostly grown in California in peak season from March to May.

Some of the most popular types of artichokes that you can grow in your garden include:

The green globe artichoke is highly popular as it takes only 75 days to reach harvest. It is grown as an annual crop in cool climate zones, while it can be grown as a perennial in the warmer summers. 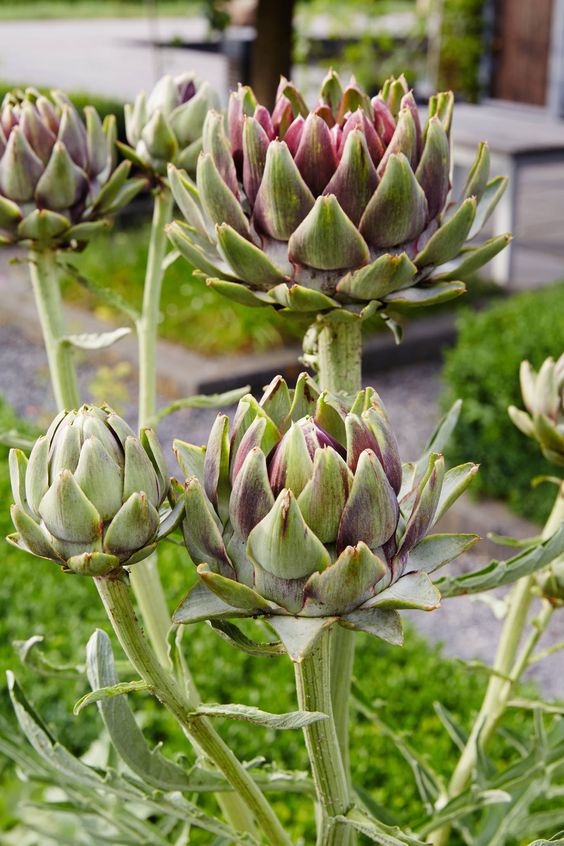 This variety derives its name from its ability to reach sizes up to five and a half inches. A relatively new type, the big heart artichoke has no thorns and is capable of handling warm weather really well. It can be grown annually from the seed. 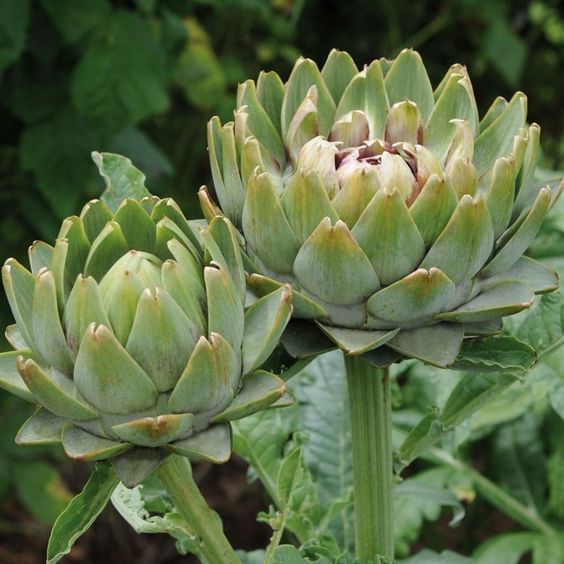 This plant is one of the small artichokes varieties you can grow at home. It is an heirloom type from Italy which is a heavy producer of side buds. The bud is known particularly for its tenderness and has an attractive purple color. When grown in the garden, it only needs 3ft spacing between the plants, making it suitable for gardens. 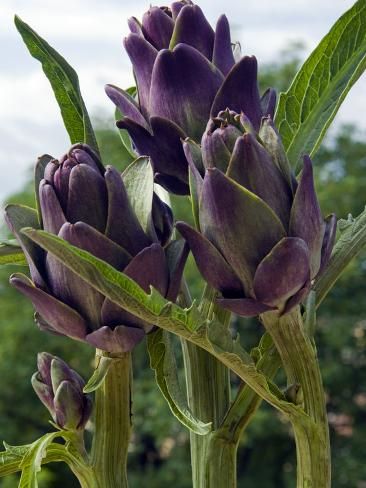 Also called the sunchoke, it is not an artichoke at all; in reality, it is a sunflower species native to North America. They can grow from 5 to 9 ft tall with blooms resembling sunflowers. It has an edible tuber that is 3 to 4 inches long. 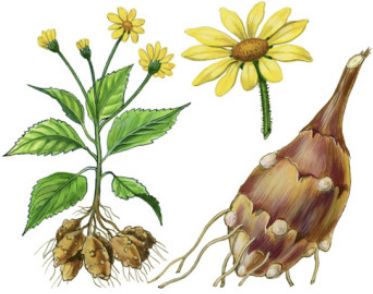 Follow these steps to plant an artichoke in your garden:

Artichokes need plenty of sunlight and well-drained soil to bear roots and grow well. If the soil is soggy, the root’s crown gets damaged, and you won’t see any growth. You can club these plants with types such as cabbages, peas, and sunflower as they won’t compete with the artichoke for nutrition.

A good mixture of potting soil, which is loamy in nature, suffices to grow artichokes. It needs to be full of organic material and not be too clumpy. To prepare a bed, dig 8 inches into the ground and mix 5 inches of compost. A rule of thumb is to add 100 lb of compost to every 100 sq ft of garden space.

If you are growing artichokes from seeds, you will have to start indoors at least 8 weeks before the last frost date. The seedlings will have to be 60 days old before you plant them into the bed. Space them apart 6 to 8 ft as their full mature size could go up to 6 ft wide and 4 ft tall. They will need full sun, so crowding is not an option.

These plants need lots of water to grow their succulent stems and buds. Therefore, hydrate the soil completely at least 3 times a week. If the temperatures outside gets too hot, it will prompt the plants to flower sooner than usual. Therefore, use overhead sprays in such instances to keep them cool. You could also use mulch to keep the soil temperatures low.

A balanced vegetable fertilizer every two weeks will take care of the micronutrient needs of the plant. Good fertilization can give a high yield.

The buds can be harvested once they begin to reach 3 inches in diameter. Then, with gardening shear, snip the center bud at the stem for a harvest. One of the benefits of artichoke plants is that they continue producing buds throughout the year until winter. Thus, they can be protected with mulch through the cold and continue growing the next season.

When To Plant Artichokes

Trimming an artichoke is quite simple once you understand the process:

When Is The Right Time to Plant Artichokes

Artichokes do really well in regions with long moist summers and zones where the winters are mild and frost-free. In colder regions plant them after the last frost in late winter or early spring.

How Long Does It Take To Grow Artichokes

Depending on the variety, it can take anywhere from 75 to 100 days for the artichokes to reach harvest.

Where Do Artichokes Thrive

Artichokes thrive well in regions of mild winters, cool summers, and lots of moisture. However, they do their best in the hardiness zones from 7-11.

How Should You Take Care Of Artichoke Plant

Your artichoke plant, like all Mediterranean plants, needs plenty of sunshine (at least 6 to 8 hours). The soil needs to be well-drained as wet soil can damage the roots. The plants also need plenty of room to grow, and depending on the artichoke varieties you have chosen, they need to be placed 6-8 ft apart.

The plants need to be watered well for 2 to 3 weeks as they grow, and then a 3-inch layer of mulch can be added to retain moisture and discourage weed growth. If your garden has poor soil, use a time-release fertilizer in the beginning to offer all the nutrients it needs.

How Many Artichokes Does One Plant Produce

Each artichoke produces about 6 to 9 buds per plant. So if you are planting for your family, plant 2 plants per person.

There are several pests and diseases that interfere with artichokes healthy growth. These are the most common ones:

Snails and slugs cause damage by eating the leaves, stems, and other parts of the artichoke buds.

The larva of this moth destroys the artichoke buds by eating them through the growing season. Therefore, they need to be controlled with insecticides.

It is a dangerous disease that kills artichoke plants. The symptoms include stunted growth, curling leaves, and reduced bud production. Affected plants must be removed from the field.

Blights are a fungal disease that develops as a consequence of damage by a previous disease, pests, or weather. Therefore, the affected plants must be removed from the garden.

Here is how to harvest artichoke and store them:

The mature artichoke plants produce buds steadily throughout the year. In most zones, they start producing buds early in summer.

The buds are easily visible on top of each shoot. The stems develop several buds with the ripening bud on the top.

The bud can be harvested as soon as it reaches about 3 inches in diameter. Ensure that it is harvested before the bracts are still tightly folded, and the bud feels solid and firm with garden shear snip one or two inches of the stem along with the buds.

The artichokes buds can be stored in a refrigerator for 2 weeks.

Artichokes are easy to grow perennial plants that are sought after for their delicious immature flower buds. Although the whole plant is edible, the flower buds are considered a delicacy. Artichokes can be grown easily in warm zones where they take 75-100 days to reach harvest.

200 Injections during Pregnancy: My Miracle and Strong Baby is Here

Taking Naproxen While Breastfeeding – Is It Safe?

Feeding Your Baby: The Best Time to Teach and Bond with Your Little One!