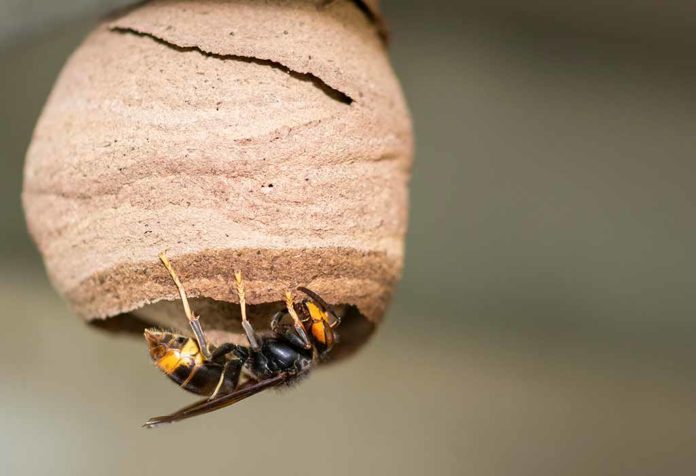 Frightening pests, wasps can be a real cause of concern for people. From building nests closer to houses to flying past doors, windows, and entryways, they can be dangerous if they feel threatened. You try to get rid of them, and they could sting powerfully. Wasps can be beneficial in some ways, and not all of them sting. Wasps thrive on insects for food, and if not for the 30,000 identified wasp species, there could be a gap in the food chain. Learn more about wasps which could be key to learning how to get rid of them permanently.

Wasps are insects that can be 1.5” in size but vary according to the species. However, in all the species, the body comprises a thorax, head, and abdomen that is disjointed by a tapered waist. Other features include a pair of wings, a pair of antennae, and six legs. Female wasp species carry poison and inject it while stinging victims. Only the female wasps can sting with their stingers located at the end of the bottom half. Wasps lay eggs from the stinger, which serves as the reproductive organ.

Where Are Wasps Found?

What Are the Common Species of Wasps?

There are some common species of wasps that you may see flying around at random times. Get to know some of these species and how you can identify them.

Not all wasp species sting, but a few do. Stings cause discomfort and unpleasantness. Basic first aid helps in usual cases. However, it can be dangerous for those with allergies, and one must seek immediate medical advice. Medical attention must be taken if symptoms are severe, persist, or if the wasp has stung the mouth or throat.

A few commons symptoms that one can experience with a wasp sting are:

How Different Are Wasps and Bees?

Bees have robust and rounded bodies that are made up of one section. Wasps have slender bodies with a tapered waist area that connects the thorax to the abdomen. Bees are hairy, while wasps are smooth and shiny. Bees feed on pollen while wasps feed on insects. A bee buzzes close to a flower and dies after stinging. Wasps sting and fly away. Bees carry pollen in their legs while wasps don’t. Wasps make their homes from paper, wood fiber, and saliva, whereas bees make vertical combs from wax to build hives. The two are different species of insects that can be distinguished from their bodies.

Are Wasps, Yellow Jackets, and Hornets Same or Different?

Very often confused, the three vary in some ways. Firstly they vary in size – wasps are smaller, hornets are larger ( about 1-11/2” long). Bees are important pollinators and are attracted to flowering plants. Wasps and hornets are carnivores and prey on smaller insects like houseflies and aphids. Wasps love sugar and hover over food, making them a problem for your outdoor soirees.

It is not difficult to eradicate wasps, hornets, and yellow jackets; however, they can be dangerous when they feel threatened.

How to Get a Wasp Nest Out of Your House? 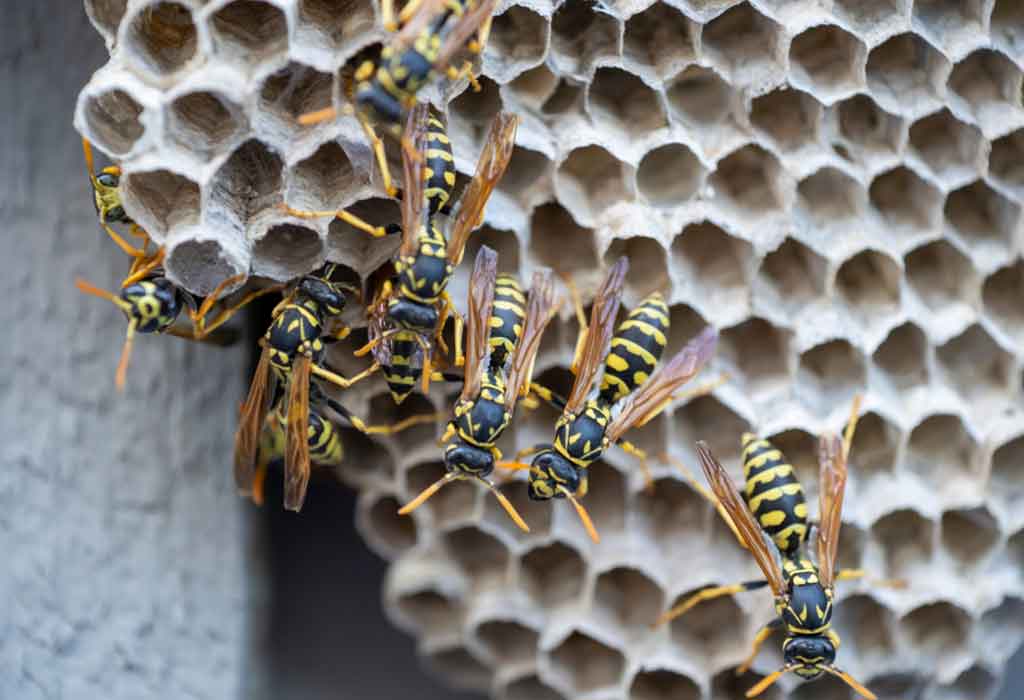 At the outset, a nest is best when left alone. One can remove it easily once the nest is vacated. First, check to see if the wasps have left the nest and discarded it. Wasps never return to their old nest. Look out for a new nest as wasps are likely to build a nest there again, as it previously has been their favorite spot. Eliminate all hints of an old nest and block the entrance route. To guarantee yourself good results, spray the nest with a store-bought wasp killer for at least 24 hours before removing it. If you see any activity, then respray on the nest. Once the nest seems quiet, follow the steps below:

When to Call Pest Control?

Wasps like the hot weather and leave as soon as the temperature starts dipping. However, if you are worried about their presence and find a nest, call an expert. If you have small children or are allergic, it is advisable to get rid of them immediately. It is not advisable to tackle a live wasp nest if you do not have professional experience. A threat is likely to trigger an alarm, and insects tend to become aggressive.

Simple Ways to Keep Wasps Away

Whether you are allergic or simply want this creature out of your sight, there are easy ways to get rid of them indoors and outdoor. Below are some tips to keep yellow jackets, wasps, and hornets away.

Use wasp traps; you can use a liquid to attract wasps. Wasps crawl in the trap, get stuck, and drown in the liquid, unable to make their way out. Replace them often as accumulated dead wasps are not a pleasant sight.

Spray a store-bought insecticide nest around your home and property. Wear protective clothing and spray around the nest late in the evening. The worker and queen are present in the evening, and the wasps are dormant. Spray with a nozzle that can help spray from a distance. Re-spray for a few days if needed.

A homemade alternative to store-bought insecticides is soap and water. This mixture can help get rid of small wasp nests. Mix two measures of dish soap with water in a spray bottle and spray over the nest. This will clog the breathing pores and kill the wasps instantly. It is the best – affordable and easy – way to get rid of yellow jackets on the ground.

Cut the top of a large soda bottle and add some soda or fruit juice. Add a few drops of dishwashing soap. Invert the bottle and replace the top. Hang this trap in the yard.

Sprays that eliminate individual wasps can be used by following the instructions on the bottle.

Nesting and prospective nesting areas can be treated with residual liquid insecticides available at hardware stores or made at home. Spray it on areas where you think wasps are likely to build nests – pool, patio, wooden fence, deck, etc.

Call pest control to get rid of large colonies as it needs an extensive treatment routine.

As the weather turns warmer, the unnerving buzz around the ear could mean just one thing – wasps. Wasps, the bane of most summers, are noisy and annoying. But they need not always be a pain as they can be great at controlling the infestation of aphids and other insects. So follow the guidelines above to get rid of wasps if you wish to.