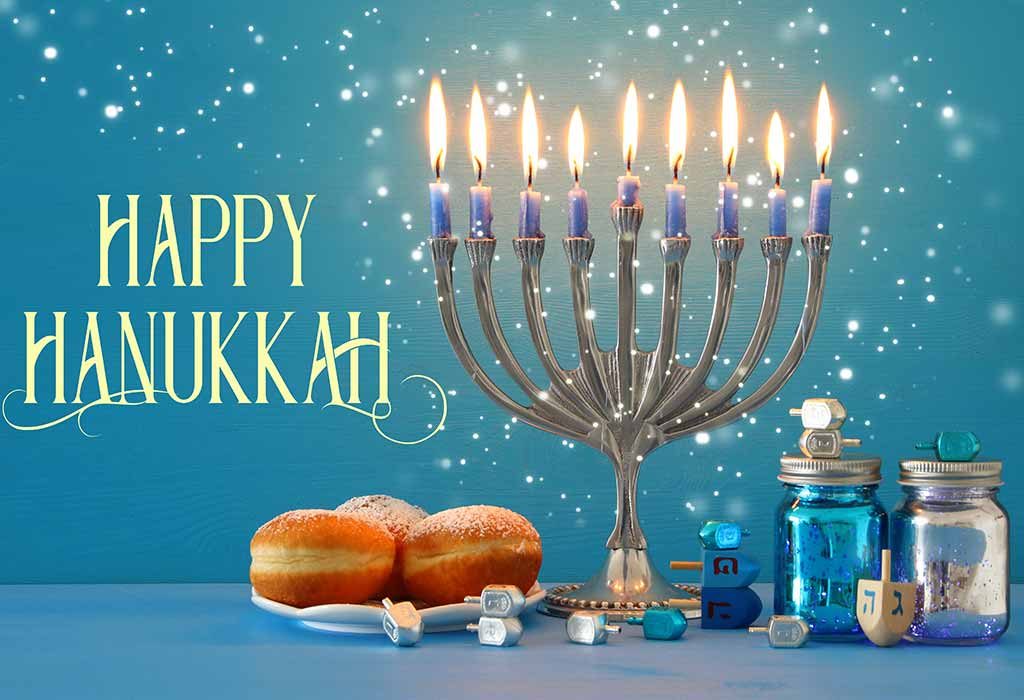 Hanukkah, or the ‘Festival of Lights’, is a Jewish holiday that lasts for eight nights and takes place in November or December. This year, it begins on 28th November. You may be familiar with families sharing Hanukkah greetings, or coming together to light the Hanukkah menorah (the seven-branched candelabrum) at this time. But, there’s so much more to this religious holiday that you may not know!

If you look closely at the history of Hanukkah, how it’s celebrated, and what each tradition means, you may learn a thing or two that will surprise you, including the spelling! PS. Both Hanukkah and Chanukah are correct. From its origins, to how to celebrate it, here’s everything you need to know about Hanukkah.

Hanukkah celebrates the rededication of the second Jewish Temple in Jerusalem, Israel, which took place in the 160s BC. Hanukkah, which means ‘dedication’ in Hebrew and Aramaic, lasts for eight days and celebrates the miracle of victory against overwhelming odds. Chanukah is celebrated with the lighting of the menorah, exchanging gifts, and partaking in some traditional foods and games.

When It Is Celebrated

Hanukkah goes on for eight days and commences on the eve of the Kislev 25, the Jewish calendar month that occurs at about the same time as December. Because the Jewish calendar is lunar, Kislev can occur anytime from late November to late December. This year’s celebrations will start at sunset on 28th November, and end on the night of 6th December.

The Origin of Hanukkah The events that inspired the festival of Hanukkah took place during a particularly turbulent period of Jewish history. The Holy Land of Jerusalem was ruled by the Greek king Antiochus and the Syrian-Greeks in the second century BC. They tried to pressurise the Israelites to follow and accept the Greek culture and beliefs. Despite the challenges, there was a small group of faithful Jews, led by Judah the Maccabee, who defeated the Syrian-Greek army and drove the Greeks out of the land. This was known as the Maccabean Revolt.

The Jews took back the Holy Temple in Jerusalem and dedicated it once again to the service of God. They built a new altar and put together a new menorah in this Temple. When they proceeded to light the menorah, they found only a single earthenware jar of olive oil that wasn’t contaminated by the Greeks. This oil was just enough to keep the lamp lit for one day. But by some miracle, that lamp kept burning for eight nights!

Since then, the festival of lights has been celebrated every year to commemorate this joyous occasion. Families light candles for eight nights, and they get together to eat foods items cooked in oil, and to exchange presents.

Are Hanukkah and Christmas Somehow Related?

Hanukkah is not the Jewish version of Christmas, despite what some movies will make you believe! Both are gift-giving holidays that are widely celebrated in December, but the similarities stop there.

Hanukkah is an eight-day festival because it commemorates the miracle of that one jar of oil that was only sufficient to light the Temple lamp for a day but burned for eight days. Christmas, however, lasts just one day.

Hanukkah marks the events that took place when the Jews revolted against the Greek King Antiochus. Christmas, on the other hand, marks the birth of Jesus Christ.

How Hanukkah Is Celebrated Every Year

To celebrate the miracle that took place in the second century BC, Jewish families all over the world, light the Hanukkah candles on each of the holiday’s eight nights, rededicate themselves to God, and retell the stories of the miracle. Let’s delve deeper into this! The most significant tradition of this festival is the lighting of a symbolic menorah. Most Jewish families will have these in their homes, while Jewish communities or organisations may have larger menorahs that are displayed in public areas. From the first day of Hanukkah, the menorahs are first lit with a primary candle, and that candle is then used to light an additional candle for each night. In this way, for the first night, the primary candle and an additional candle are lit, for the second night, two additional candles are lit, and so on, right until the eighth night. The candles are attached to the menorah from right to left, but are lit each day from the left to the right-most candle. Judaic blessings are often chanted before and while the candles are being lit. A game of Dreidel is a common way to celebrate the holiday. According to tradition, before the Maccabees revolted, the Jews weren’t allowed to study the Torah. So they would read the holy text on the pretence of gambling with spinning dreidels!

Dreidel is a Yiddish word which comes from ‘drei’, which means to turn or spin. The dreidel, a particular spinning top for Hanukkah, has four Hebrew letters inscribed on it. In Israel, the letters are Nun, Gimel, Hay and Peh. Everywhere else, they are Nun, Gimel, Hay, and Shin. These letters represent the phrase ‘Nes Gadol Hayah Sham’ which, in Hebrew, means ‘a great miracle happened there’. During Hanukkah, eating food fried is considered to be symbolic of the oil used to light the menorah. Traditional Hanukkah dishes like Latkes are prepared. Latkes are fried potato pancakes that are served with applesauce or sour cream. Sufganiyot, which is a doughnut filled with strawberry jelly, is a dessert that’s quite popular on this day, too. Everyone is given Gelt, which are real coins or gold-wrapped chocolate coins. These are used for betting, and the players win or lose the pot depending on which side the dreidel lands!

There’s a song that is sung about the dreidel. Its first verse goes like this: What Message Does Hanukkah Hold for People?

The original Chanukah story shares some powerful lessons, which are taught to everyone – kids and adults alike. It is said that once must carefully listen to what the candles are saying. So, let’s take a look at what the flickering flames are saying!

1. Don’t be afraid to stand up for what’s right.

Judah Maccabee and his community faced intimidating odds, but that didn’t bring everything to a halt. They said a prayer, had faith, entered the battle of their lives, and emerged victoriously. We can do the same.

The Hanukkah candles are lit when it starts getting dark. They serve as a beacon for everything that’s in darkness. So, be like a candle that lights up everything around you. No matter how dark it may be, your rays of light go further than you think.

3. Always be kind, and try to multiply your goodness.

At Hanukkah, one candle is lit on the first night, two on the second night, and so on. Likewise, try to be more kind. There’s always more that you can achieve.

It’s not enough to simply be a Jew at heart or only at home. Hanukkah teaches us to shine brighter into our surroundings!

5. Don’t be ashamed to perform mitzvahs.

Even if you feel different, don’t be ashamed to carry out a religious deed. Be like a menorah, which proudly reveals its shining uniqueness for all to see.

Now that you know all about Hanukkah history, origins and traditions, we hope you make the most of this year’s celebrations! Chanukah Sameach, or Happy Hannukah!