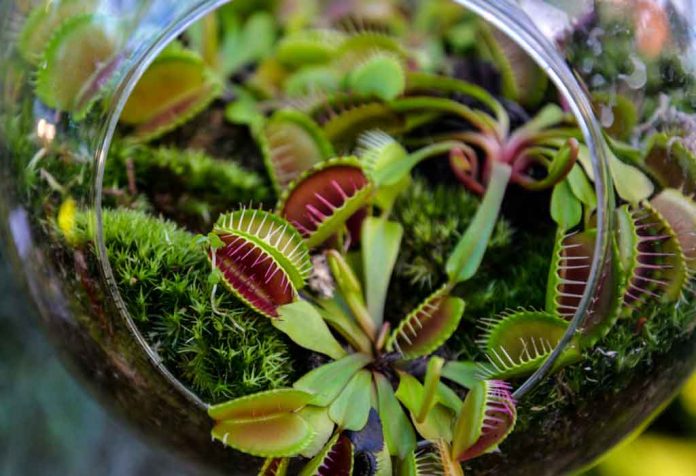 The Venus Flytrap is anything but an ordinary house plant that people would pick to grow in their garden. This alien-looking plant doesn’t just have an unusual appearance but is also a carnivore! While it’s not a plant that many gardeners would fancy, some are fascinated by this one-of-a-kind plant. If you wish to grow one in your yard or balcony, there are a few things you need to learn about this remarkable plant. Continue reading for all you need to know on how to grow one.

Where and When to Grow Venus Flytrap

Venus Flytraps are perennial plants that are native to eastern North and South Carolina. Only one species of the plant – Dionaea muscipula and multiple different breeds of the same have been bred to exhibit exotic traits such as coloring and different growth sizes. The plant does well in moderate to hot and humid weather but cannot tolerate freezing temperatures. It needs 60 percent humidity and a temperature range of 70 to 75 F. Nighttime temperatures should not fall below 55 F.

Venus Flytraps can be grown both indoors and outdoors. They need plenty of sunshine. Therefore, they need to be kept close to a window at all times when they are cultivated indoors. People living in colder climates can grow the plant indoors in a terrarium – open on the top and with well-balanced temperature and humidity levels. They should never be grown in terrariums outdoors as glass traps heat and burn the leaves.

One of the most common questions enthusiasts ask is how much sun does a venus flytrap need? In their native land of Carolina, temperatures go close to 86 F during the summer and can drop to 32 F in winter. Since their growth zones receive plenty of sunshine, they will need direct sunlight to grow well. For those growing the plant in higher latitudes, it is essential to plant them facing south to get as much sun. When growing them indoors, they will do well under the powerful T5 grow lights.

During their active growth period, the plants need at least 4 hours of direct sunlight and about 12 hours of light. Plants grown with as much sunlight as they can get will turn out to be fresh and vibrant. On the other hand, those receiving less than optimal light will appear dull but still maintain their overall health.

The second most frequently asked question is: how often do you water a venus flytrap? Venus Flytraps grow in damp soil conditions that have little to no nutritional value in their natural environment. Since they derive nourishment from eating insects, they don’t need water with minerals such as sodium, chlorine, sulfur, magnesium, and phosphorus. Using tap water for long periods can lead to mineral build-up and eventually kill the plant. It is ideal to use pure water such as distilled water or rainwater to grow your Venus Flytrap rather than tap water. This is a critical detail that is easy to overlook. Therefore, when planting your Venus Flytrap, ensure they are out of reach of the sprinklers so they can be watered separately with pure water.

Like many other plants, Venus Flytraps also go into a state of dormancy in the winter months to make it through the cold. Their growth stops, and the leaves turn dark and wilt. The mechanism that activates the traps also stops working. With winter on the horizon, this is a sign that the plant is preparing to enter dormancy. The phase lasts for 3-4 months, and it’s essential to change the way you care for it.

Whether growing the plants indoors or outdoors, they need to be kept in a cool place during their dormancy. It doesn’t need much light during this phase, so keeping it close to a window that gets decent daylight will work fine. In their natural habitat, Venus Flytraps can survive temperatures upto 20°F; however, the container-grown varieties aren’t that resilient. They need to be kept in temperatures around 35 F to 50 F during their winter dormancy, and as long as the temperatures don’t drop below 30°F, you can leave them outdoors. If it drops well below freezing, bring the plants into the garage.

In winter, the plant sheds its leaves as it goes to dormancy. While it doesn’t feed during this time, water the plant to keep the soil moist at all times. As spring arrives and the temperature rises to 50°F, and the days get longer, move the plants back to where you were growing them before. If inside the house, move them closer to the window or take them out to the patio. If the plant still has dead leaves clinging to it, it is time to trim them off.

In the middle of spring, the plant goes into flowering mode and enters its most exhausting phase. Unless you intend to harvest the seeds, you need to cut off the flower stalk to stop the process once it reaches about 2 inches long. When prevented from flowering, Venus Flytraps grow more vigorously in the summer months. Feeding your Venus Flytrap is the fun part; however, you need to take precautions to protect the plant. The traps are naturally designed to attract flies, and your plant will get sufficient food when placed outside in the garden. If you are growing them inside, you need to understand their working mechanism before feeding them anything. The traps contain six trigger hairs inside that trap to close and seize the insect. The hair is also designed to sense the struggle of a trapped insect which tells the plant that it has an authentic, living meal and not some random foreign object that has fallen inside. This mechanism triggers the production of digestive enzymes when live insects fall into the plant.

To successfully feed your indoor plant, you need to catch live insects and caterpillars and introduce them into the trap with a pair of long terrarium tweezers. Providing them dead insects or any other form of meat doesn’t work as the trigger hair isn’t stimulated. Avoid feeding them insects that are larger than a third of the size of their traps. The feedings should be no more than one or two insects a month.

These plants thrive in soil that is poor in nutrients. Therefore, whether you make your soil mix or buy potting soil, the growing medium must be nutrient-poor. Regular potting or growing in soil rich in nutrients will burn the roots and eventually kill the plant. The same applies to any commercial fertilizers; they need to be avoided to stop damage to the plant. The soil medium could be a 50/50 peat moss and perlite mix to give sufficient water retention and aeration. The soil needs to be maintained in a damp condition at all times except in winter when you can cut back on watering.

Venus Flytraps can be repotted once a year to keep the medium fresh and allow the plant to grow vibrantly. It is a good idea to re-pot them soon after you buy them from the nursery to remove any impurities that may have entered the pot. The best season to repot the plant is in early spring or summer, even though they can be repotted at any point during the year. As mentioned earlier, a potting mix of 1:1 peat moss and perlite is ideal for the plant. Thus, there is no need to mix anything else such as compost or fertilizer.

To re-pot your Venus Flytrap:

Many first-time enthusiasts wonder: how big does a Venus Flytrap Plant get? Surprisingly the plant doesn’t get any bigger than 5-6 inches tall, making them perfect as indoor plants. Venus Flytraps need plenty of sunshine to grow vibrantly. Therefore, it is crucial to keep them close to a window to get at least 4 hours of direct sunlight every day when growing them indoors.

The plants also need lots of humidity to thrive well. Therefore, ensure that your terrarium is covered with just enough to retain the moisture but not so much that it would send the plant into rot. It is essential to keep them in a controlled environment with plenty of light and humidity in colder climates.

Venus Flytrap is a carnivorous plant that needs to feed on insects to live. Taking care of simple measures can enable the plant to be grown both indoors and outdoors. They thrive well in low-nutrient soil and need pure water for healthy growth. They make excellent indoor and outdoor decorative plants.

When Do Babies Make Eye Contact and How Can Parents Encourage?