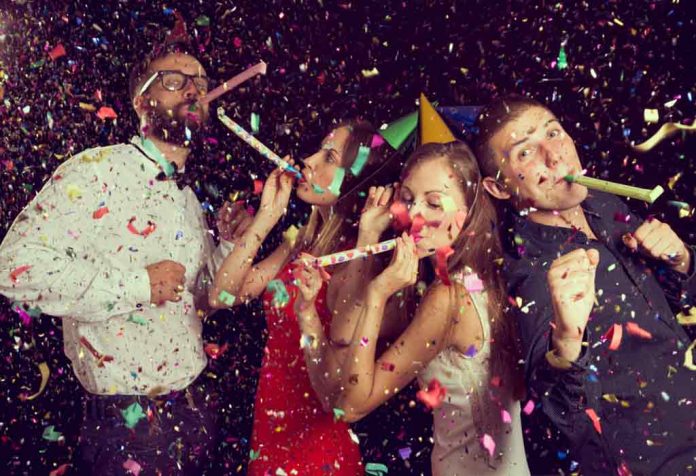 The previous year has been challenging for all of us. But even if the setting has changed from dining table conversations to long skype calls, a silly joke can always make the distance seem smaller.

If you have earned the title of being the ‘funny one,’ these jokes are a must to remember to keep your reputation. From the ones that can make your kid laugh to the old one-liners, from dinner to cocktail – all the new years eve jokes are here.

Funny Happy New Year jokes can liven any party, whether it’s online or at home. This list of funny jokes has you covered!

1. Why do you think it would be a good idea to put the calendar in the freezer?

To begin the new year in a cool way!

2. Where did the astronauts go party on New Year’s Eve?

Yes! But it failed because they didn’t planet in time.

4. Guess what happened to the man who stole a calendar for the new year?

5. Why did Steve pick up his left leg before midnight?

To begin the new year on the ‘right foot’!

6. At new year’s toast, a wife wanted every husband standing tall by the one person that made their life better the last year.

The bartender was crushed to death!

7. What is a corn’s favorite holiday?

8. What do farmers give their wives on New Year’s Eve?

9. Where are the comedians on New Year’s?

Waiting for the punchline!

1. Friend: I heard about your crazy new year’s resolutions from last year. Accomplished any?

Me: Yea, took a run with lions of Africa!

Me: Trekked to Mount Everest Naked!

Friend: (Beginning to be doubtful)

Me: There is one I could not do, stop my habit of lying.

2. What is a new year’s resolution?

One that goes in one year and out the other.

3. The guaranteed way to succeed in keeping up with your new year’s resolution?

Resolve to break whatever is your resolution!

4. What is the only worthy new year’s resolution?

5. I proudly kept my new year’s resolution of not biting nails for the entire month of January.

6. My new year resolution is to be humbler.

And I am doing really good; there is hardly anything I fail once I put my mind to it!

7. What did the drunk Irish man, thinking of the evils of drinking, do on New Year’s Eve?

He gave up thinking, hah!

8. Why did I not quit smoking after my new year’s resolution?

Because no one likes a quitter!

For a New Year’s Eve with kids, this list of jokes will keep them entertained.

1. How do you wish the ghost in your attic on New Year’s?

2. How do you say goodbye on New Year’s Eve?

See you next year!

3. How do cows wish each other on New Year’s?

5. Where will we practice math on New Year’s Eve?

One-liners are the denim of the joke industry – they never go old.

1. Who gets the most excited with the New Year’s Eve countdown?

2. What is the difference between youth and middle age?

Youth is when you look forward to staying up on New Year’s, and middle-age is when you’re forced to do so.

3. Why is a jeweler needed on New Year’s Eve?

To ring in the New Year!

4. I have a date for the new year already.

It is 31st December!

Jokes are handy tools that can change the ambiance in seconds. Roll these jokes up your sleeve and spill them on New Year’s Eve, and be sure to cheer up everyone!

STEM vs STEAM vs STREAM: Things You Need to Know

Yes! You Can Be a Better Human Being

A Page From the Diary of a Mother