Air pollution is currently at its worst in India with over 22 Indian cities included in the list of the most polluted cities in the world. As the air quality deteriorates across different parts of the country, everyone should take active measures to prevent the condition from getting worse. It is also essential for people to be extra cautious about their health and protect themselves against the harmful illnesses caused by air pollution.

10 Most Air Polluted Cities in India

Due to the rising levels of air pollution in the country, many cities have become unhabitable. According to the National Air Quality Index, a healthy AQI is between 0 to 50 and under 200 is considered moderate. Everything beyond this level is harmful to people and the environment. Here is a list of the 10 most polluted cities in India.

Surprise! Surprise! With Delhi’s CM Arvind Kejriwal comparing India’s capital to a ‘gas chamber’, Delhi’s air quality continues to deteriorate rapidly. Covered by a blanket of smog, Delhi’s air quality index is currently at 489 marked as ‘severe’ on the National Air Quality Index. Some of the causes of air pollution in Delhi include vehicular emission, crop burning in neighbouring states, and over-population in the city.

Haryana is one of the most polluted states in the country right now. Despite banning stubble burning, farmers in places like Hisar continue to use this agricultural practice and add to the adverse situation of air pollution. Hisar’s AQI is at 476, and the air quality is consistently declining.

Another city of Haryana, Bhiwani’s latest AQI is at 471, and it is also affected by the hazardous agricultural practices being employed by farmers. As more and more cases of farm fires come to light, different parts of Haryana become uninhabitable. Manesar is a small town near Gurugram, and its air quality index is worse than Gurugram, which is a metropolitan city. This industrial town is adversely affected by industrial waste and the high vehicular emission caused by the Kundli-Manesar-Palwal Expressway.

Another industrial town, Bhiwadi, located in Alwar district, Rajasthan has been experiencing poor air quality for the past few months. According to the Central Pollution Board, it was the most polluted city of India on the day of Diwali. Apart from common reasons like vehicular emission, wood and coal burning, Bhiwadi’s air quality also suffers due to the chemical gases emitted by the industries.

As industries move away from the city of Delhi, they are emerging in neighbouring small towns like Baghpat, causing a rise in their air pollution levels. On 4 November, Baghpat recorded an AQI of 500, the highest AQI in the country.

Known as the “City of Nawabs,” people of Lucknow have been experiencing severely poor air quality according to the air quality index. The city is witnessing the worst air quality in three years. Many instances of people suffering from breathlessness and losing consciousness have been recorded. Lack of green spaces, ongoing construction projects, and vehicular emissions are some of the causes behind the high AQI of 424. 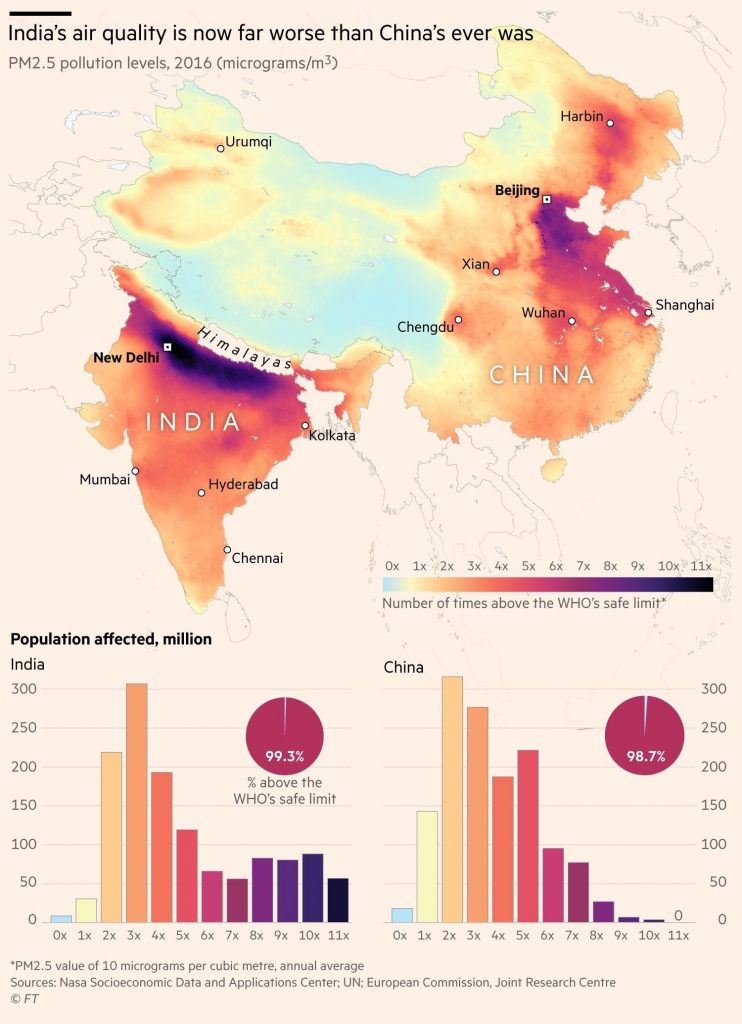 Over 100 cases of stubble burning have been recorded in Sirsa in the last month making this town one of the most polluted places n the country. As farmers continue to resist against the ban on stubble burning, the situation will only get worse. The state government needs to find an alternative and encourage farmers to use it to improve air quality.

The industrial hub of Uttar Pradesh, Kanpur recently recorded an AQI of 453, having the poorest air quality of all time. Many parts of the city are usually engulfed in smog, and garbage burning and dust are the two primary sources of air pollution. Air pollution has had a detrimental impact not only on human beings but also on animals because a recent report stated that the animals in the zoo have been experiencing respiratory issues.

Harmful Effects of Air Pollution That You Must Be Aware Of

As air pollution continues to rise in major cities across the country, people are suffering from critical health issues. Here are some of the detrimental effects of air pollution in India.

What Can You Do If You Live in One of These Polluted Cities?

If you live in one of these polluted cities, then you must always be worrying about how to deal with the problem of air pollution. Some of the air pollution solutions include: Tips to Protect Your Family From Outdoor Air Pollution

How Can You Prevent Indoor Air Pollution? As the air quality continues to decline, you must take active measures to protect yourself and your loved ones from the harmful effects of air pollution. It is also crucial for every citizen to be mindful of how they can bring about changes in their lifestyle and their surroundings to improve the situation.