10 Hocus Pocus Costumes for Everyone to Wear This Halloween

10 Hocus Pocus Costumes for Everyone to Wear This Halloween 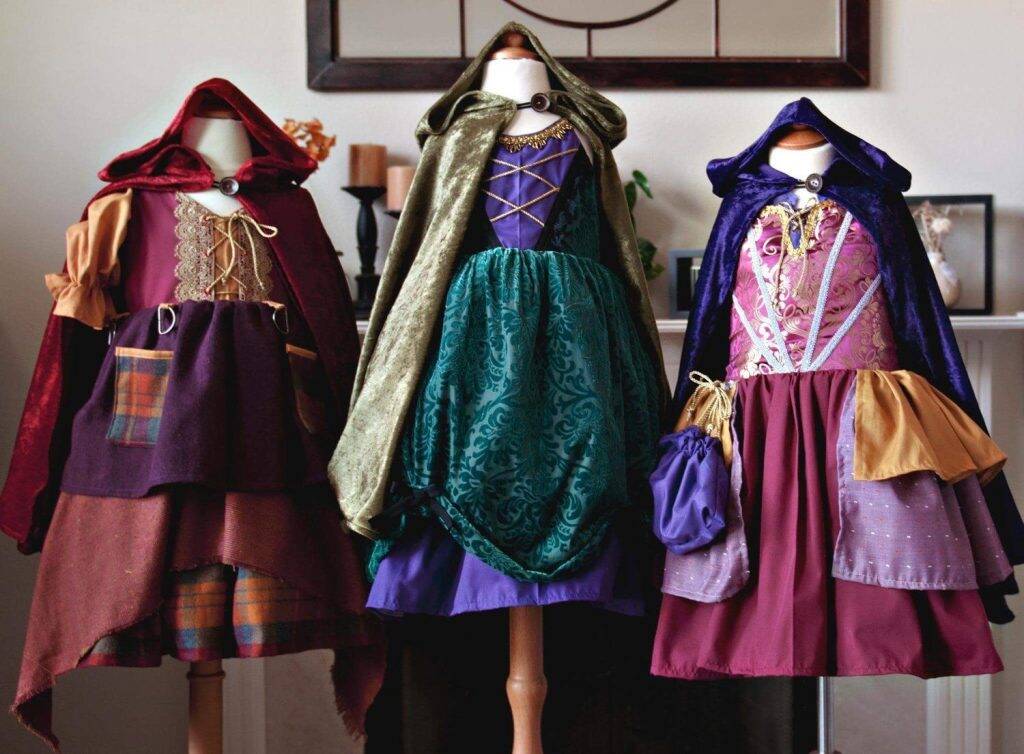 Hocus Pocus, the hit film of 1993, is an all-time Halloween favorite film. The name conjures up three faces- Winifred, Mary, and Sarah Sanderson, who played resurrected 17th-century witches. A family film, Hocus Pocus, has become a tradition that is celebrated every Halloween. With glamorous witches as comedians and a sharp repertoire of wit, they seem to be a top choice to dress up as on Halloween-be it- adults, tweens, or kids. The look is inspired heavily by Disney characters and inputs from the real-life actors who played the part. Whatever be the history, Hocus Pocus Halloween costumes could be the perfect choice for this season.

The witches played by Bette Midler, Kathy Najimy, and Sarah Jessica Parke are a seasonal treat, and apart from sucking the blood out of all children in Salem, they are fairly tame. Comic and glamorous, the sartorial element of the characters was created by Mary Vogt. Midler played a huge part in influencing the color looks, while Disney princesses inspired Sarah’s look. Some interesting trivia about the costumes and look of the characters are listed below:

Whether you watch Hocus Pocus for an uproaring comedy, nostalgic references to the ’90s, or the camaraderie of the characters, there is one thing that you for sure cannot miss- the fabulous costumes. The iconic and colorful costumes of the Sanderson Sisters have made it the go-to Halloween costume. However, here are some important facts that you may have missed about the costumes:

Recreate the magic of the film with Hocus pocus witches’ costumes this Halloween. Wigs, caps, gowns, and color is all you need to resemble the three glamorous and fun witches from the movie. A few DIY Hocus Pocus costumes that could spruce up your Halloween night.

Undoubtedly the most brazen among the Sanderson sisters, the Winifred Sanderson Hocus Pocus costumes for adults are perfect to twin with your children. All you need is a green gown with some bright make-up on.

All you need to put this together is a pair of black pants, a shirt, and a jacket. Then, just rent a wig with some scruffy hair and use cream and powder to recreate the face. Finally, add in some black accents to add more detail.

An easy costume to put together, you need something in purple, red and white. Begin with a  white corset and create a blush color for the face. Next, use sashes and drapey fabric to create the flowy look and cut off the ends of a pair of fishnet stockings to create sleeves.

Another easy one to create, you need a red dress or cloak. Just let the hair down with some flowy curls at the end and keep saying “Amuck, Amuck” all night long.

A perfect kid’s Hocus Pocus costume, all you need is some tattered pieces of clothing. Then, use some yarn to shut the mask, which was sewn shut by Winnie.

Each of the sisters had a unique hairdo. Try getting the auburn hair wig if you want to resemble Winifred, the wired standing braid for Mary, and Sarah’s blonde wig. The hairdos for each of the sisters were specific, and you could re-create that look easily.

Just wear a Billy Butcherson Mask to look the scariest on the block, even more, spooky than a witch. Team it with a pair of black trousers and a t-shirt.

Don a pair of black onesies or jumpsuit. Add in a tail to dress as the man turned black cat.

If you are a creator, you could use some card paper, googly eyes, and other craft material to create the Winifred spellbook. Use as much material to make it look as spooky as the one in the movie.

Bring every costume to life with the props that were carried by the characters. For example, make sure to carry a vacuum cleaner if dressed as Mary, wear rich gemstones like amethyst and emerald for Winnie and, don and fishnet stockings for Sarah, who was the diva of the lot.

The Sanderson sisters were fashionistas in their own right and served as a wonderful example to dress up as for Halloween. So if you are going to recreate the look, the above tips and ideas could help. Take a look at the characters and their dressing sense to understand how you could work things out for yourself with what you have at lying at home.