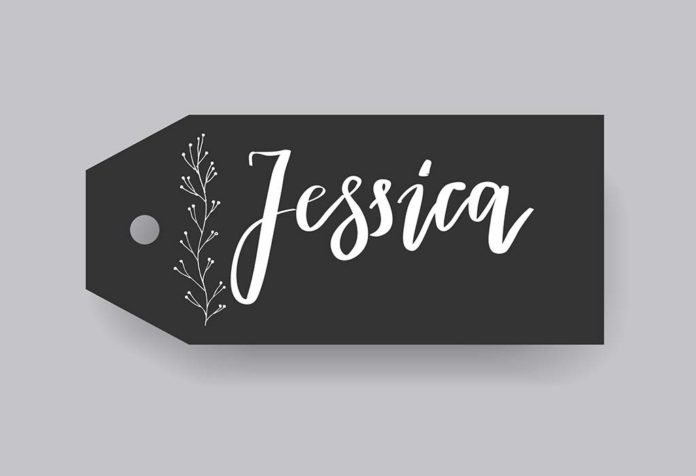 The oldest written record of the name Jessica can be dated back to the 16th century. Jessica is exclusively used as a feminine name coined by William Shakespeare, who introduced Jessica as the daughter of the Jewish moneylender Shylock in his play ‘The Merchant of Venice.’ From the Hebrew root word ‘Yiskah,’ Jessica means ‘rich’ or ‘God beholds.’ Jessica as a boy name is relatively rare and can be more commonly used as Jesse as its masculine equivalent.

What Does Jessica Mean?

Though it may sound old-fashioned to some, Jessica is a timeless name that has remained one of the favorites among English-speaking countries. The meaning of Jessica is “to behold,” “to see before,” or “God beholds” in Hebrew. As Jessica can be elaborated as a feminine form of Jesse derived from the word Yishai, meaning ‘gift,’ the meaning of Jessica can be interpreted as ‘gift from god’ or ‘grace of god.’

Jessica might have been an Anglicisation of the name Iscah, the daughter of Haran mentioned in the Book of Genesis11:29. Iscah was rendered as “Iesca” in the Matthew Bible version available in the Elizabethan era. The Bard may have popularized the name through the play ‘The Merchant of Venice,’ but he might have been initially inspired by the Biblical name Iscah, spelled as Jescha, a closer variant of the invented name.

Parents who are very creative and appreciate other cultures and languages may look for some Jessica name variations and other spellings for Jessica as appealing as the name itself.

How Popular Is the Name Jessica?

A favorite among Jewish families, “Jessica” was the first or second popular female baby name in the US from 1981 to 1998 before falling out of the Top 20 in 2004. Between 1985 to 1990, Jessica held the coveted No.1 position for baby girl names in America and again from 1993 to 1995. The Jessica baby name ranking remained consistently in the top 10 from 1976 to 2000, in which it was at the height of its popularity. Until 2011, the name Jessica remained in the top-100 name for girls in the US. However, the Jessica popularity index was ranked #399 as per the latest statistics of 2020. Jessica has stood steadfast throughout history due to her cheerful sound and cute and delicate nicknames like Jess, Jessa, Jessie, or Jessy.

As per the search trends data, interest for the name Jessica shows a consistent value of over 30 over the last ten years, reaching 100 in November 2015. The lowest value recorded was 34 in May and June 2021.

Interest in Jessica – US

Over the decade, search trends for Jessica have recorded a consistent search value of over 30, reaching 100 in April 2012. The lowest value was recorded in November 2020 at just 33.

Search trends for the name Jessica reflect maximum interest by the United States in the last ten years. Countries like Sweden, Canada, Australia, and the Philippines follow close behind. A relatively large Jewish community has made a Biblical name like Jessica hugely popular as a girl name in the United States.

Search trends of Jessica in the US

District of Columbia leads the search trends among the sub-regions of the US for the name Jessica over the past decade. Following this, New York, Massachusetts, New Jersey, and Connecticut complete the top 5 sub-regions generating the highest search.

Middle Names That Go With Jessica

Popular middle names can augment the significance of your child’s forename as well as its meaning. Some of the double names with Jessica that can help to reflect age-old tradition as well as modern trends:

Avant-garde and fashionable names of celebrities are destined for fame and success. They instantly capture our hearts and complement our personalities. Hence, parents interested in choosing a name inspired by famous people called Jessica can look up the inventory given below:

Baby names like Jessica may be identical in sound and style. Jessica’s family names need to be chosen that can suitably carry the legacy and regality of the name. Some other names for Jessica that create a unique rhythmic pattern:

Names that rhyme with Jessica may follow a particular theme and sound amazingly lyrical, notwithstanding their same or different meanings. You can morph a classic name like Jessica into its modern form to appear more refreshing to new-age parents.

Sibling names with a similar origin, meaning, or sound create a stronger connection between them. Some most suitable sibling names that go with Jessica:

Nicknames are like the calling card that often replaces a formal or proper name. Here are some of the most charming, funny, and cute nicknames for the name Jessica that bears testimony of the love you share with your baby.

Jessica has been used down the ages due to its Biblical connection and the popularity of Shakespearean plays. Although other female names have come into prominence in the last few years, Jessica is still a classy name to consider when it comes to your name selection process.

How Daughters Can Be Best Friends

Ideas to Plan Your Child’s 1st Birthday Party on Budget

Hydrocortisone Cream for Babies – Benefits and Side Effects