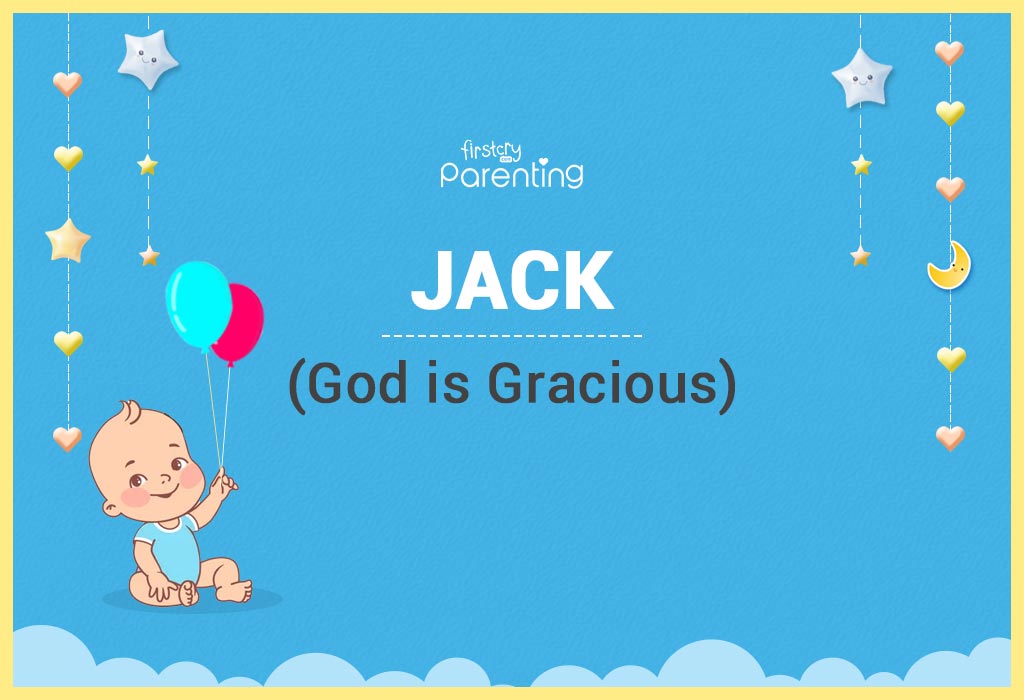 Jack is one of the traditional names that never go out of style. This name has been popular since the 1880s. The name gained its significance because of its meaning and is seemingly popular among our older generation and the present generation. You can find this name in various fairy tales and nursery rhymes like “Jack and Jill,” “Little Jack Horner,” “Jack and the Beanstalk,” among others.

What Does Jack Mean?

It is essential to choose your baby’s name by carefully evaluating its meaning. The meaning of Jack is “God is Gracious” in English. In the Middle Ages, the phrase “jack of all trades” was significantly famous. It meant people who are all-rounders, having the ability to do diverse work. In Celtic, the name means “healthy,” “energetic,” and “strong,” and in Hebrew, the name means “God’s grace” and “the supplanter.” Therefore, this name is meaningful and beautiful, making it one of the most popular names in the 21st century.

Derived from the name John, the name Jack originated from medieval England. The development of the name occurred from John to Johnkin, followed by Jankin to Jacking and ultimately leading to Jack. This signifies the name has evolved over the century to what it is today.

In different cultures, nationalities, and religions, a name can have different variations. Other spellings for Jack signifies the origin of the name from various countries across the world. This list includes some of the Jack name variations:

How Popular Is the Name Jack?

The popularity of the name Jack has remained consistent throughout the decades. The name has always been among the top 200 list in the US since the 1880s. The Jack popularity index suggests that the popularity of the name significantly elevated from 2000 onwards. According to the data from Social Security Administration, the name Jack has entered the top 50 name list in the US. It ranked 46 in 2000, dipped a little in 2001 with a rank of 48, however, managed to move up and ranked 42 in 2004.

The SSA data suggests the popularity of names only increased with time. The Jack baby name ranking indicated the name ranking 34 in 2005. The name experienced a slight increase and decrease in popularity but never slipped out of the top 50 list.  The name ranked 45 consistently in 2010 and 2011, after which it reached 40 in 2015. From this year, the name’s popularity has skyrocketed. It ranked 28 in 2018, 19 in 2019, and 21 in 2020. Therefore, the name’s potential to enter the top 10 list can be understood by the considerable interest in the name.

Interest in Jack – US

The popularity of the name Jack has been consistent in the US in the last ten years. The name has consistently maintained a rank over 75, which shows the high interest in the name. This name’s interest peaked in September and October of 2018, followed by October 2020.

Popularity of the name Jack

According to the search trend of the name Jack worldwide, it has been the most popular in the United Kingdom over the last ten years. The name ranked 100 in the UK, 90 in Ireland, and 86 in the United States. In Canada, the name ranked 77, and in Australia, it ranked 76, indicating its vast popularity.

Search trends of Jack – US

In the last decade, the name Jack ranked 100 in Missouri and California, indicating the highest search trend in these cities in the US. Arizona follows it with a rank of 98, Nevada with 95, and Hawaii with 91. Therefore, this signifies the name being the most used in these cities.

Middle Names That Go With Jack

Middle names are an essential part of American culture. Therefore, it is vital to choose a middle name that goes well with the first name. Consequently, some of the double names with Jack are:

The influence of celebrities is significant in the lives of daily people. Their impact can also be understood when naming children since many parents choose the names of their favorite celebrities. Therefore, some of the famous celebrities named Jack are:

Different baby names like Jack have different spellings but have the same meaning. This provides an alternative list of names for the parents to choose from. Therefore, other names for Jack with similar meanings and family names for Jack are:

There are names across the globe that are similar sounding to a chosen name. In this case, names that rhyme with Jack is:

Nicknames act as an alternative to a name and are usually used informally. These names are given by family members or close friends and are frequently used instead of the proper name. Some of the nicknames for Jack are:

Jack is an evergreen name that has never lost its popularity in ages. The name consistently rises in the baby name list in the US and has been among the top 50 list since 2000. The name has entered the top 25 since 2019 and has a remarkable probability of rising in the future further.

Previous article « How to Raise Your Child to Be Independent, Happy, and Confident
Next article Verbal Abuse in a Relationship – Signs, Impact, and Ways to Handle It »