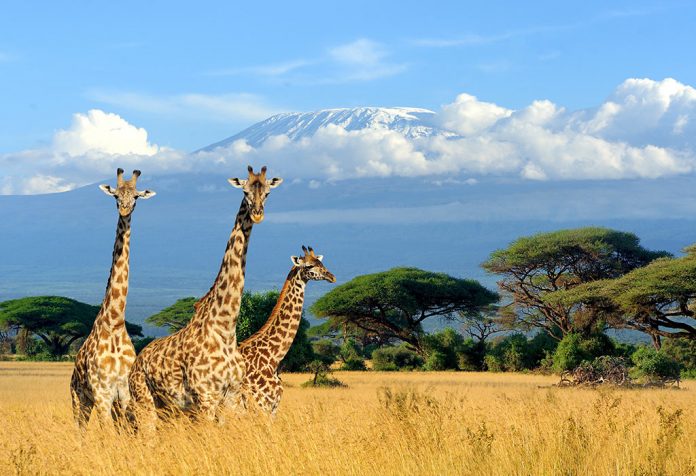 The tallest animals in the world, giraffes are native to the continent of Africa. Did you know that in ancient times, giraffes were called Camelopards? This is because giraffes look like camels due to their long legs and necks, but have the colour pattern of leopards. Let us find out some more interesting things that we can learn about giraffes.

Facts About Giraffe for Children

Below are some facts about giraffes that describe how unique and interesting they are.

1. Where are giraffes found?

2. What do giraffes eat and drink?

Giraffes usually obtain their food by roaming around their habitats. They prefer the shoots and leaves of the Acacia tree, but they consume other types of plants as well. They generally eat leaves, vines, herbs and other soft vegetable matter. Even though many people believe this fact, giraffes don’t like to eat grass.

Giraffes spend most of their time looking for food and eating it. Giraffes drink water sparingly. They only drink once in a few days, which means they don’t have to live near water bodies like ponds and lakes. In fact, giraffe’s can go three weeks without drinking water, while camels can only go for two weeks!

Giraffes belong to the same family as cows and deer, which makes them part of the ruminant family. Ruminants are animals who chew their food, swallow it, digest it partially, then bring it back to their mouths for more chewing.

An adult giraffe is around five to six meters in height, that is sixteen to twenty feet. This means they are as tall as an electricity pole, making them the tallest animal on earth. Male giraffes weigh around 1,300 kg while female giraffes weight around 830 kg.

The coat of a giraffe is a pattern made out of brown patches with yellow or orange hair in between. This helps them stay disguised in the grassy areas of their habitats. The fur of the giraffe has many chemicals that help them fight parasites and infections.

Why do giraffes have long necks? The neck of a giraffe is often more than two meters long. This is because having a long neck helps them reach food in tall trees. Giraffes also have two small horns on their heads, which are called ossicones. Endangered species means animals which are in danger of dying out. Some types of giraffes, like the Rothschild’s giraffe and the West African giraffe, are endangered.

Other Fun Facts About Giraffe

Here are some other fun bits of giraffe information for kids:

Giraffes are beautiful animals with many unique characteristics. In addition to being the tallest mammal, they are also faster than horses. However, the number of giraffes has been reducing for the past twenty years. There were around 140,000 giraffes in the world in 2000, but now that number is around 80,000.

2 Weeks Pregnant – What to Expect?

23 Side Effects of Birth Control Pills

Indulge in These 5 Slices of Bliss to Rejuvenate Yourself