10 Interesting (and Weird!) Christmas Traditions Followed Around the World

10 Interesting (and Weird!) Christmas Traditions Followed Around the World 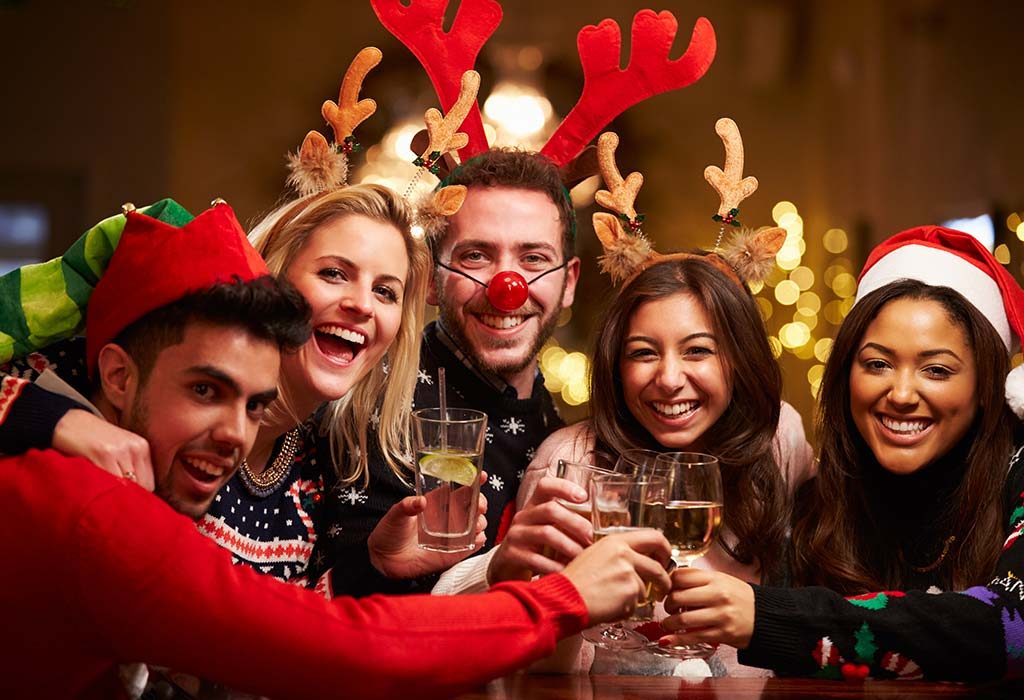 When we think of Christmas, the image that comes to mind is probably right out of a Hollywood movie – there’s the grandly decked-up tree, the snow-blanketed roads, red and green colours adorning everything in sight, presents, winter-wear, and most of all, happy faces! Watching enough of Hollywood (and regional movies shot in Western countries) can lead you to picture a white and snowy Christmas, but we all know that it’s a far cry from the different ways we celebrate the festival here, in India. And that goes for a lot of countries around the world as well, where the traditions will make you wonder if we’re talking about Christmas at all! Here are some unique Christmas traditions around the world.

10 Unique Christmas Traditions From Around the World

Some seemingly normal, some downright strange, and some with no sign of anything remotely “Christmas” – check out these unique, and some weird, Christmas traditions.

1. Great Britain – A Kiss Under the Mistletoe

Hanging mistletoe indoors and stealing a kiss under the bough was a tradition practised by British servants, way back in the 18th century. It was considered to be bad luck if a kiss was refused under the mistletoe. The tradition has stuck around ever since and has made its way into popular culture as well. Christmas in Japan means bucket-loads of KFC meals – which is weird, considering how chicken has almost nothing to do with the festival. But what this does mean for KFC in Japan is plenty of business – people book their buckets months in advance so that they don’t miss out last minute! No, people don’t troop around and set fire to herds of goats, but the actual custom isn’t far from strange either. The Gavle Goat is erected every year in central Gavle in Sweden,at the beginning of Advent. A wooden skeleton is covered entirely by straw and the shape is that of a traditional Swedish Yule Goat. The practice that has now become commonplace is that arson attacks are carried out to burn the goat down! The goat was first erected in 1966, and since then, has been burned down or damaged at least 37 times. There’s nothing legal about this either, as suspects have been arrested and punished with huge fines. So, no, it’s not like the accepted custom of burning a huge effigy of Raavan during Dusshera!

Quite a strange Christmas tradition, an Eastern European folktale is the reason why ornaments shaped like spider-webs are now placed on Christmas trees primarily in Ukraine. According to legend, a poor widow and her children cared for a pine tree that grew in their garden, all year long, in the hope that they’d have a Christmas tree when the festival rolled around. However, they all went to bed sad on Christmas Eve when they realised they couldn’t afford to decorate it. The next morning, though, the tree was covered in cobwebs; when the first rays of sunlight touched these cobwebs, they turned into gold and silver. Legend has it that the family never experienced poverty after that Christmas. Who knew a dreaded creepy-crawly could bring people such joy! A Serbian tradition you may not want your child to know of, gifts are given in exchange for getting untied! That’s right – on the three Sundays leading up to Christmas Day, members of the family take turns to gift each other. Kids give gifts on the first holiday which is called Djetinjci, married women do so on Materice, the second holiday, and married men, on Oci, the third holiday. The tradition basically involves kids tying up the legs of the parents, then dancing around them chanting and asking what they would give to be untied. The parents pretend to be surprised then give gifts to be freed. On Djetinjci, kids are tied up by adults and they give gifts that have been pre-arranged. Materice is celebrated with much joy out of all three for some reason; kids sure seem to get a kick out of binding their mothers’ legs with a belt or rope or scarf, then demanding gifts to let them go free! 6. Norway – Hiding Brooms from the ‘Witch’

One of the Christmas traditions here involve hiding broomsticks inside the house so that wicked witches won’t steal them for a midnight ride! Kids don’t look forward to Santa’s visits here; instead, they eagerly await the presents brought to them by Baby Jesus on Christmas Eve and St. Mikulas at the beginning of December. Parents ring a bell in the room where the tree is kept, indicating that Baby Jesus has dropped off the presents and that the kids can enter the room. St. Mikulas doesn’t dress up in the traditional red Santa suit, but rather in white clothing, much like a Bishop. Oh well, as long as they get the gifts right, we wouldn’t mind a special appearance by someone other than Santa either! Usually between the 16th and 24th of December every year, roads in Venezuela are closed to vehicles and are host to a flurry of people rollerskating their way to Christmas mass! In fact, some kids go to sleep after tying a piece of thread on their big toe and dangling their foot outside their window; passersby rollerskating the next day pull on these strings to wake the kids up, so that they can witness the spectacle! Now that’s a fun (and eco-friendly) start to the occasion, don’t you think?

This is probably one of the weirder International Christmas traditions. In Germany, a pickle is usually hidden somewhere on the tree, once the tree has been completely decorated. On Christmas morning, the kids search for the pickle, and the one who finds it first gets a special gift. The adult who spots it first is said to have good luck.

Looking for a reason to go shopping? Wait for it. In Iceland, all those who finished all their Christmas cleaning and decorating chores on time would receive new clothes to wear on Christmas, while the lazy ones would not. It is believed that the yule cat roams the countryside on Christmas eve and eats those who have not received new clothes.

Did you enjoy reading about these Christmas celebrations around the world? In India, given that the population of Christians is comparatively low, the festival is celebrated on a smaller scale. Don’t be fooled by the word ‘small’ though; banana or mango trees are decorated, snacks and goodies are prepared aplenty, families attend midnight mass (especially Catholics), and you cannot miss the classic star lanterns anywhere. Santa Claus is welcomed warmly in households when he comes with carolers, distributing sweets and toys. That’s right, Indians also celebrate Christmas with much fun and love – it’s just spiders and goats and tying up people that they give a hard pass!