Home Baby Safety I Can Vaccinate My Child When He’s Older – 10 Vaccination... 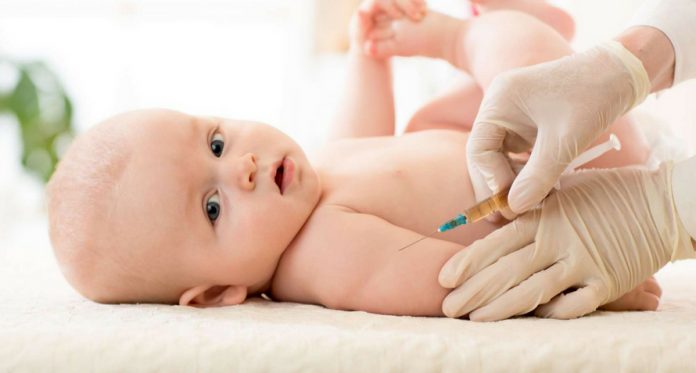 Vaccination can protect your child from a large number of potentially fatal diseases. Although watching your child getting a shot can be very painful in itself, the benefits of vaccination trumps the mild discomfort it causes.

Thanks to vaccination, diseases like Polio, Measles, Diphtheria, Pertussis (whooping cough), Rubella (German measles), Mumps, Tetanus, Rotavirus and Haemophilus Influenzae type b (Hib) that used to once be common in India can now be prevented and even eradicated.
Contrary to popular belief, high immunization rates are actually imperative to keep diseases like these from making a dangerous comeback even after they have been eradicated.

10 Myths About Vaccines That You Shouldn’t Believe In!

Myth 1: Too many vaccines may overwhelm my child’s immune system!

Your child’s vaccination schedule can seem daunting, and as a parent it is natural to worry about how vaccines might affect a child’s developing immunity. But this should be the least of your worries. When your child is born, he/she is exposed to multiple germs and his/her immunity system copes perfectly well. The vaccine introduced into your child’s body is a weakend or killed version of the bacteria or virus, therefore the risk of major side effects is almost negligible.

Myth 2: My children do not need to be vaccinated as long as other children are getting their vaccines!

While the risk of an outbreak decreases considerably  if more number of kids in a specific community are vaccinated, it doesn’t eradicate the risk completely. Scientists call this ‘Herd Immunity’. However, these diseases not only pass on from child or child, but also through other sources. Some viruses or bacteria are waterborne and airborne, and commute in the same manner. Even once the disease has been eradicated there is a possibility of it making a dangerous comeback. Skipping vaccinations actually puts your young one at greater risk for potentially fatal diseases.

Myth 3: If a disease has been eradicated, there is no need to get vaccinated against it.

Many times even if a person is not suffering from a disease he/she can still be a carrier. Children who are not vaccinated are susceptible to the infection and can also easily pass it on to vulnerable family members.
“Those children are more likely to give a disease to those who can’t fight it off, such as a six-month-old or a grandparent living at home,” says Dr.  Thomas Saari, M.D. (Vaccine Education Center at the Children’s Hospital of Philadelphia). What’s more is that air travel has increased the level of exposure of people to multiple diseases.

Did You Know:  Since the launch of Global Polio Eradication Initiative, Polio case numbers have decreased by 99%. India was declared ‘polio-free’ in 2014 by WHO and only three countries remain where the disease is endemic—Afghanistan, Pakistan and Nigeria.

However, it is important to continue with immunization against polio virus as the transmission of polio virus is still active around the world. India is particularly at high risk of re-infection with the polio virus due to close proximity to Pakistan and Afghanistan.

The link between a combination vaccine for Measles, Mumps and Rubella (MMR vaccine) and the developmental disorder Autism was slammed more than 7 years ago by a case report from England. The reason this topic was picked up in the first place was because autism tends to emerge around the same time as when the MMR vaccine is given.

Watch: After a lengthy investigation, the British Medical Journal says Andrew Wakefield’s report linking Autism to Vaccination has been discredited.

Myth 5: Vaccination may lead to the disease we are trying to prevent!

Vaccines that are given today consist of dead or extremely weakened strains of the virus or bacteria and not the live agents. Therefore, it is not possible for your child to get the disease, as the bacteria or virus will not be able to replicate itself. The reason behind introducing the antigen is only to stimulate the immune system.

Initially vaccines contained thimerosala, a compound that prevents the vaccine from getting contaminated. The reason this concern (of vaccines containing dangerous preservatives) was brought up was because thimerosala contains a form of mercury called ethylmercury, and mercury is associated with brain damage in humans.
These concerns prompted the removal of thimerosala from vaccines. (Thimerosal is still present in some flu vaccine—though you can ask your doctor for a thimerosal-free shot.)

Myth 7: You shouldn’t give a vaccine to a child who has a cold!

If your child is recovering from high fever or a rip-snorting ear infection, certainly it is not the best time for a vaccine. But a mild fever, light cold or little diarrhea should not be the reason to delay a vaccine. You can consult your child’s pediatrician about the same!

Like many childhood diseases chickenpox may not seem like a big deal, but on certain occasions this disease could escalate, causing complications and eventual death. Chickenpox lesions can get infected with staph which includes a flesh eating bacteria, which is why it is imperative to get your child vaccinated against chickenpox.

Not quite. Vaccinations reduce the chance of getting the disease by a large chunk. The effectiveness of vaccines made with killed, or inactivated, virus is between 75 and 80 percent. The actual virus is much stronger, and there is a slight chance your child’s body’s immunity system may not be ready to fight it even after vaccination.

Myth 10: I should wait for my child to get older before vaccinating him.

Your child is vulnerable to over 23 disease potentially fatal diseases by the age of 2 years. The reason most vaccines are given at a young age is because young children are more susceptible to these diseases as compared to adults. As we grow older, are immunity system also strengthens. The vaccination schedule is designed in a way to protect your child from the diseases he/she is most vulnerable to at that age. Missing out on a vaccination age window, increases the risk of your child getting that disease!

With the rise of the internet, access to information has become extremely easy, but on the downside the credibility of this information comes into question. This downside has resulted in a drastic drop in the number of children getting vaccinated in Kerala. All this due to alarmist social media posts and Whatsapp forwards that are spreading mistrust in the community with claims that the Measles-Rubella vaccine is community targeted to cause impotency or that is has caused deaths among children. In fact, Kerala’s Malappuram even reported deaths of two children from diptheria, a disease that is easily prevented with vaccination. While more than 80% of Kerala is vaccinated, in Malappuram the vaccination coverage rate is on about 50%. Despite these stats, a majority of the community still remains ill-informed.

“When you get messages like that, you get frightened for your children. You think: ‘Better I do nothing, because doing something may just harm my children, whereas they are fine right now without it,” said Ahmed  a 42-year-old tailor in Kozhikode who didn’t get his children vaccinated.

A group of doctors have launched a Facbook page called Info Clinic to counter this fear mongering, but it is upto us to educate ourselves & our community and question credibility of these so-called ‘facts’ to ensure better public health.

It is always better to be sure than sorry later. For any doubts about vaccination and its side effects you can consult your child’s pediatrician.

12 Biggest Parenting Mistakes and Ways to Recover From Them