How To Play Hopscotch - An Easy Guide For Kids 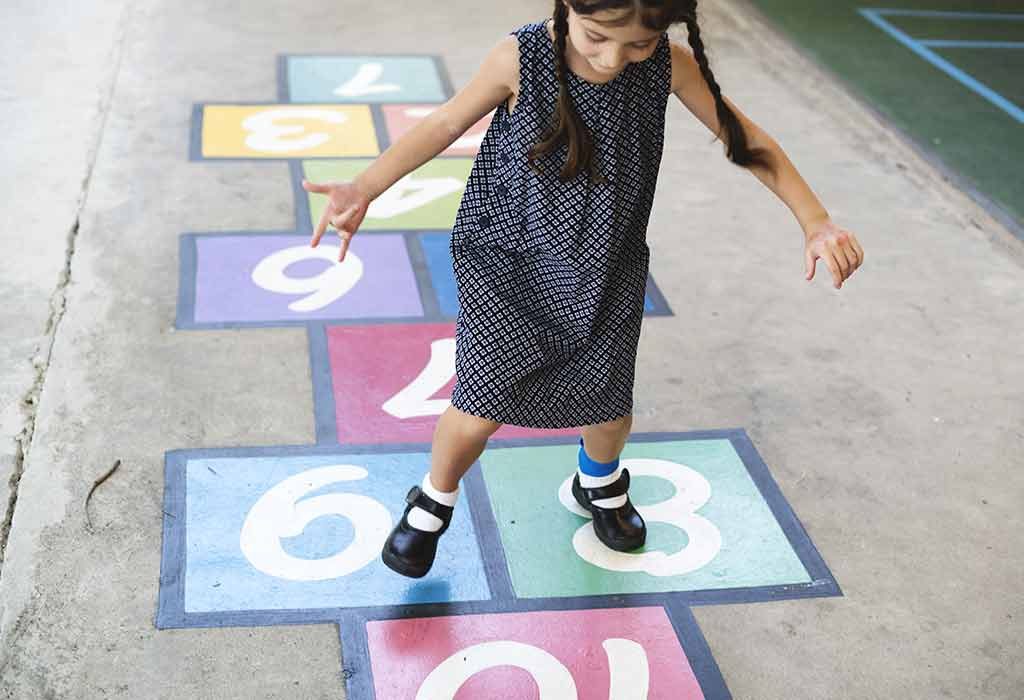 Hopscotch is a traditional children’s game that involves hopping over a series of squares and returning to their original position. The goal of the game is to pick up an object which has landed on a square. The game can be played solo or by two or more players.

A fun fact about hopscotch is that it dates back to ancient Roman times. Roman soldiers would hop over fields of up to 100 feet in a bid to improve their speed, coordination, and agility. Sometimes they would carry heavy equipment weighing more than 3kg or wear heavy armour while hopping over these squares. When the Romans took this game outside their training camps and started it as an everyday training drill in their backyards, younger minds mimicked their parents and soon children playing hopscotch became a common scene on the streets. That is how the hopscotch game for preschoolers and kids came to be.

The term scotch refers to a square or lines forming a border with chalk on the ground while ‘hop’ refers to hopping over it. Hopscotch is thus, literally, “hopping over the scotch.”

Importance of Hopscotch in Your Child’s Development

Hopscotch Rules: How to Play 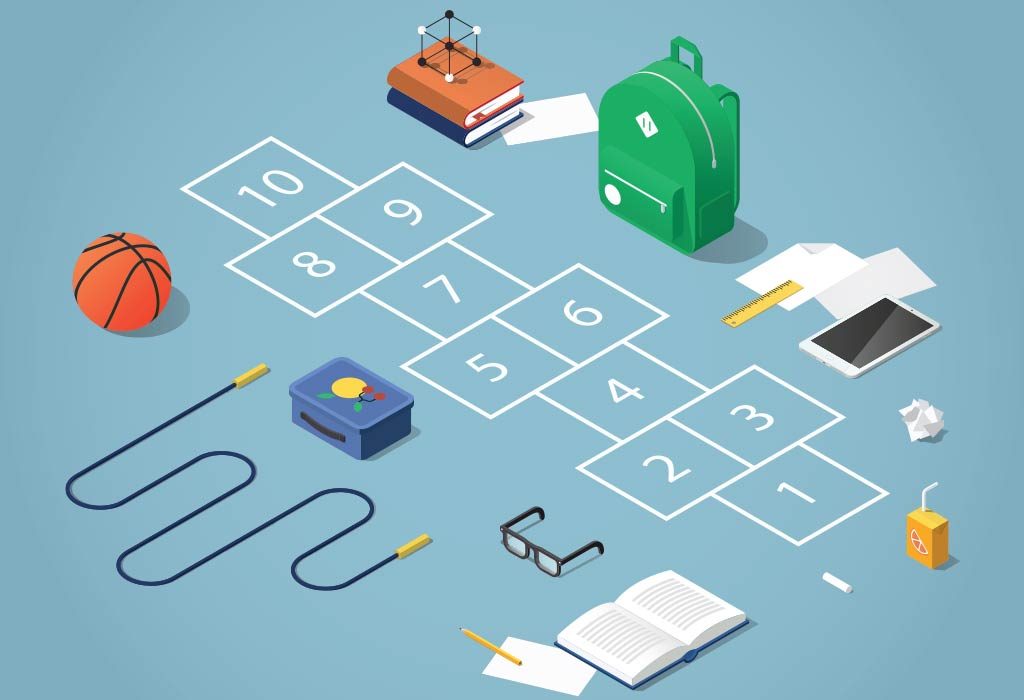 The rules of hopscotch are pretty simple. The gist of the game is you hop over a series of squares with the aim of picking up an object thrown. You skip the first square the object is thrown and hop over the rest. On your way back, you pick up the object and exit. There are a few rules involved in the game and some additional steps. You can teach hopscotch to kids by reading the steps below.

1. What You Will Need

You don’t need a lot of things to start playing hopscotch. Here are the materials you need and you’ll find most of them lying around your house:

What You Need To Do

Here’s what you need to do in order to start playing hopscotch after you gather the required materials: 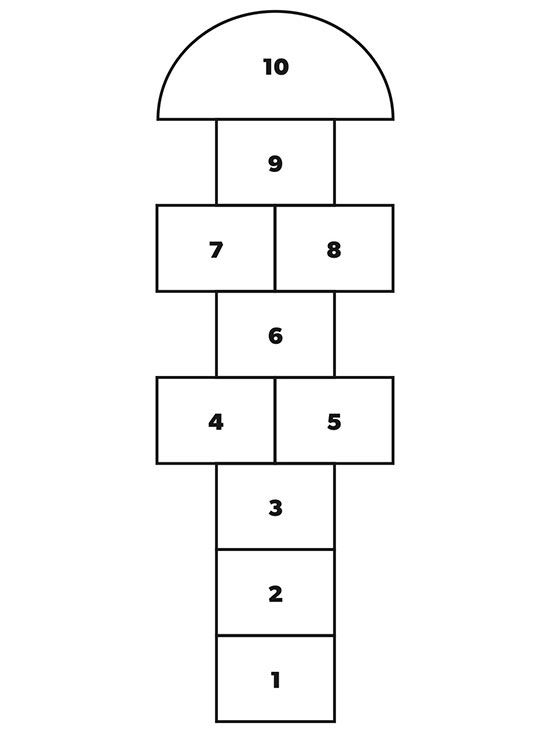 When Player 1 fails, Player 2 will start their turn and so on. Whoever manages to get the object from square 1 to 10 and hop successfully throughout these landings will win the game

Amazing Hopscotch Variations You Must Try With Your Kids 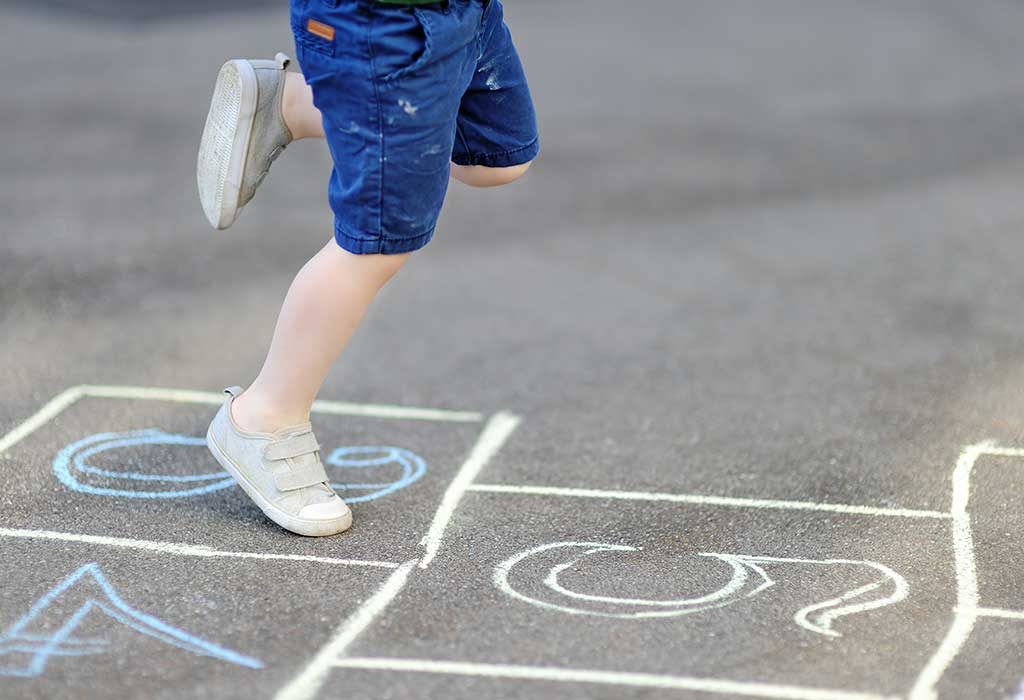 Here are a few amazing hopscotch variations you can try out with your kids if you’re bored of the classic design:

That’s right. Don’t just stick to 10. You can make the game last up to 12 or 15 if your kids are looking for a true challenge or if you want to start creating your own hopscotch

2. Change the Sizes of the Squares

Changing the sizes of the squares will challenge their coordination and pacing. They’ll be careful when making the next hop and it’ll test their precision when landing.

3. Change the Shapes of the Squares

You can make the game creative by drawing circles, triangles and rectangles instead of the traditional rectangular design. You can customise it and really get artistic by adding in shoe-shapes or animal shapes for the squares. Get your creative juices flowing!

If you want an extreme challenge, set a time limit for finishing the game. Players will atomically lose and move onto the next players if they fail to finish the course within the time limit. It’ll be a lot of fun.

5. Change the Direction and Pattern

You don’t have to stick to the traditional vertical pattern. You can number the squares and draw them out in a zig-zag or spiralling direction. You can play on hilly areas instead of flat terrains or change the nature of the course. Your creativity is limited by your imagination alone and there are various hopscotch lesson plans available online too.

Now that you’ve learned how to play hopscotch it’s time to get started. Take your kids out to the field, and get drawing and hopping. It’s not just good exercise for the body but the mind and soul too. And it’s tons of fun!