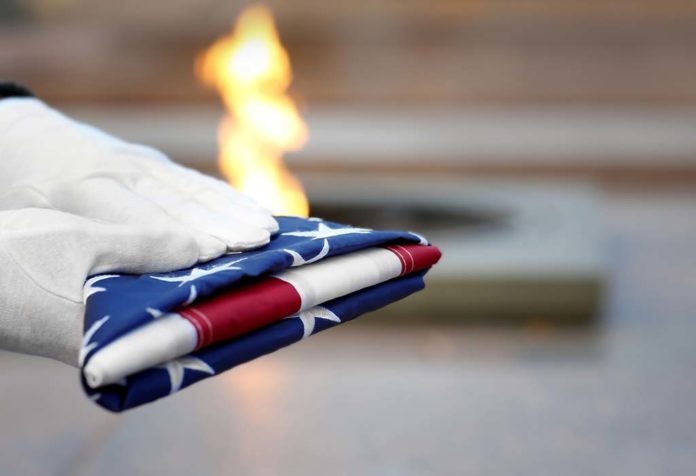 A proper flag fold is vital for care, maintenance, and storage. It is not very often that you get to fold a flag. The Army and the Navy lower the flag daily at their last note of retreat. They then fold it in a triangle shape. The shape is similar to the hats donned by the colonial soldiers. The shape of the folded flag is neither intentional nor coincidence. Flag folding has a symbolic gesture of showing respect for the country and all that the flag represents. It is a very vital and emotional aspect of many ceremonies, including funeral services and burial traditions. But before learning about how to respectfully fold the American flag, it will help to learn more about the history and tradition of folding.

A symbol and emblem of sacrifice, freedom, and martyrdom, the American flag folding tradition pays the utmost respect to the country and the sacrifices made by people. The traditional American flag folding steps are often observed at funerals and other specific events. The flag represents a lot, with the canton of blue with the stars representing the states the veterans served in uniform and bearing allegiance to their honor. The blue dresses from the left-hand side to right are turned over when draped as a funeral cloth.

In the Armed Forces, the flag is lowered and folded in a triangle and kept under vigilance all night as a tribute to the veterans who died serving the nation. This is the ceremony of retreat. The next morning at the ceremony of reviling, the flag is flown high as a symbol of belief that the dead are resurrected. The flag is folded in thirteen steps, with each one holding a significant meaning. It is an honorable tradition that comes with great responsibility. The flag represents the sacrifice of the men and women in the armed forces every day and is not about pomp and splendor.

The long-standing tradition was decided at a conference in 1923 when veterans and patriotic associations agreed on a conventional code for respectful treatment of the flag by citizens, including immigrants. This tradition must always be respected, and if you own an American flag, there are a few important things to know about how to respectfully fold the American flag.

When to Fold the American Flag?

Now that we know what do flag folding ceremonies represent, it is important to know when to fold the American flag too. The flag is folded after it is lowered from the mast. One must fly the flag between sunrise and sunset as per flag etiquette. It can be flown in the night if there is enough light to illuminate it. In severe weone must take the flag downen down if it is not made of waterproof material. Flags must be flown in good conditions so that it is not damaged. Memorial Day, Veterans Day, military-style ceremonies, and retirement events are when the flag is folded honorably. Usually done at dusk, if folded right, the stripes fold into the field of blue stars as day moves to night. In the Army and Navy, it is done at the last note of retreat.

How to Fold an American Flag – Step-By-Step Procedure

To learn more about the history and tradition behind flag-folding ceremonies, it is imperative to learn the American flag folding instructions to get it right. It is the moral responsibility of citizens to follow the procedure. The American flag folding procedures comprise 13 steps representing the original 13 colonies of the United States, with each fold representing something.

Two people must fold the flag as it must never touch the ground. The flag must be held waist-high, with the right side and the surface parallel to the ground. One must keep the tension in the fabric kept at all times. The flag must be folded lengthwise by bringing the lower striped section over the canton ( blue field of stars) and holding the edges together. 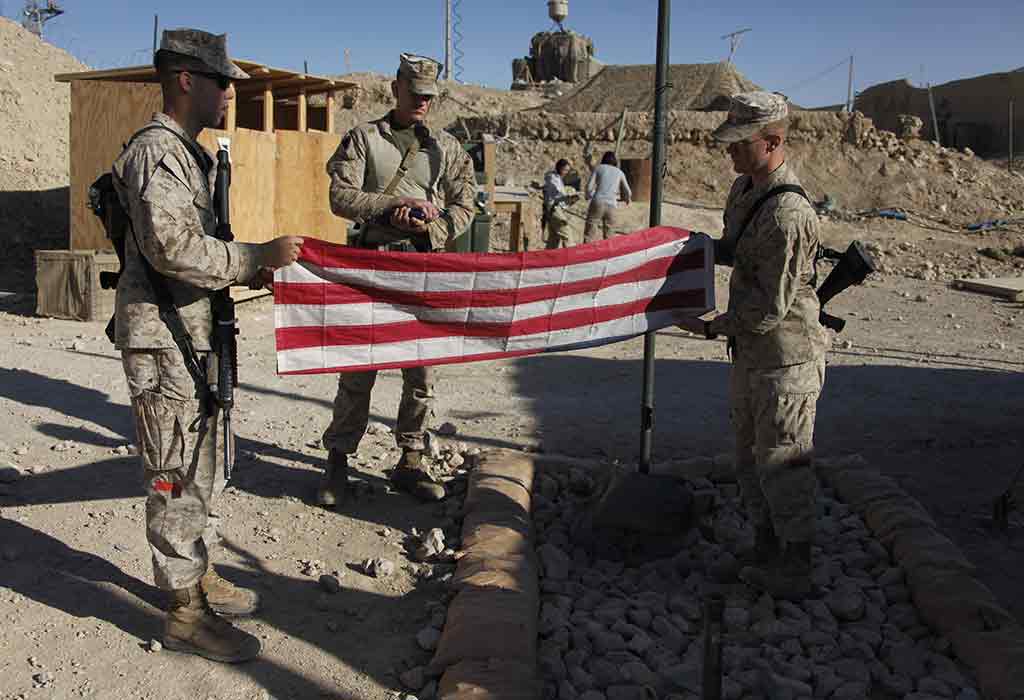 The second fold is again done lengthwise by bringing the canton to the outside.

Bring the striped corner of the folded edge to meet the open edge. This starts the triangular fold.

To form a second triangle, the outer point is turned inwards.

The 5th fold to the 12th fold is repeating folding the flag in the same manner as above. You need to do it eight more times.

Folding the flag in a triangle brings the red and white stripes into the canton, symbolizing the end of day and onset of night. With the last fold, the stars are at the uppermost.

In this way, the flag can be folded in an organized manner. Follow the step-by-step guides and follow the pictorial representations to get it right. To fold the flag into the shape of a cone, one must carry out each fold the way it is meant to. There is a certain pride attached to the folding of the flag, and one must honor it.

Symbols and Meaning of The American Flag Folds

The 13 Folds for the American flag represent the religious principles that are the very basis on which this country is founded. As a country, the United States of America represents democracy and the freedom to live and express one’s views. Each fold of the flag carries a special significance. Read on to find out more:

The first fold stands for liberty. It signifies life in America. As an American citizen, one can own property, elect their own government representative, follow their own religious beliefs and travel freely without any restrictions. Anyone is free to chase the American Dream.

This fold represents the belief in eternal life. Abraham Lincoln believed that a house that stands divided within itself could not stand ooone’sown. Unity in the face of adversity like a natural disaster and threats, like the one on 11 September 2001, preserves the constitutional republic.

The third fold signifies the honor and sacrifice of the veterans of several ranks who gave their lives for the country and protected the nation. It also stands for justice. Every person is equal before the law and deserves to be treated fairly.

The fourth fold represents the weak human nature and how we need to trust God to help us preserve, endure and remain steadfast in difficult times of hardships and obstacles. With the divine providence of God, as Americans, we seek to remain steadfast in the worst of times.

Stephen Decatur once said that “Although our country, while dealing with other countries, could be right or wrong but will remain our own.” It also represents the ability to be resolute in times of difficulty.  During World War II, Americans were considered to be incapable of enduring hardship. But they proved them wrong.

6. Sixth Fold: Allegiance to The Flag

The sixth fold symbolizes the allegiance to the flag and for all that the republic stands and represents. It also represents valor or courage. Courage to defend oneself in times of opposition. The red color of the flag shows heroism and pa“” tribute to the bloodshed by the Americans who sacrificed their lives for freedom.

A tribute to the armed forces, the seventh fold recognizes their contribution in protecting America from enemies. It also represents purity, a nation free from any blemish or principles that render the nation weak. The Founding Fathers created documents that let people come to America and settle there to escape atrocities in their own country.

The ninth fold is a tribute to women and womanhood. Women are expected to be respected for their traits of faith, love, devotion, and loyalty that are integral to mold the character of a human being. One of these human beings goes on to serve the country and dedicate their life for the sake of the nation.

10. Tenth Fold: Tribute to Those Who Have Upheld Honor

The tenth fold symbolizes honor and thanks those who have upheld the honor of America. Each citizen is expected to condccountry’slves in a manner that will bring a reputation to the nation. It is also a tribute to the fathers who send their sons and daughters away to serve their country.

The eleventh fold represents independence and the authority to make choices for oneself. Americans have always valued their independence for making their own choices and standing by them.

The Twelfth Fold represents the truth that is preserved through adherence to reality and avoiding any falsehoods.

The last fold where the stars are on the upper side represents and reminds one of the national mottoes “In God We Trust.”

How to Store Your Folded Flag

Apart from understanding what do flag folding ceremonies represent, there are specific guidelines regarding storing them as well. Below are a few tips:

1. Display The Flag in a Case

Once folded, you can display the flag in a triangular case or a memorial flag case.

2. Store in a Clean, Dry Place

Keep the folded flag in a closet separate from other clothes. It is a good idea to put it in a plastic “”se to stop it ””om becoming dirty.

3. Secure The Flag in The Spot

Try keeping the flag in a separate drawer to stay saf“”and secure. It ””es not have to fall over each time to pull something out.

Other Tips for Folding the American Flag

A few miscellaneous tips to follow once you have mastered the correct way to fold the American flag :

1. Why is USA Flag Folded Into a Triangle?

The United States flag folding ritual is related to ancient folklore. To tri fold the American flag is to respect that folklore, similar to the hats worn by the soldiers during Colonial times. It is also likely that the triangular fold works well.

2. How Many Times is The American Flag Folded & Are There Any Other Variations to Fold?

The best method to fold the American flag is the 13 fold procedure. There is no official rule to fold the flag. However, one can follow variations as they please. The flag is available in many sizes, and some may not fold to a triangle even after 13 folds.

Although some may consider it a simple national flag, many sentiments and emotions are associated with the US flag. This makes it compulsory to follow specific guidelines and methods for hoisting it, folding it, and storing it for future use.

12 Biggest Parenting Mistakes and Ways to Recover From Them

The Long Road of Pregnancy Is Actually Short

50 Business Quotes to Keep You Motivated

Best Dog Names for Your Pup