How to Clean Your Baby's Ears 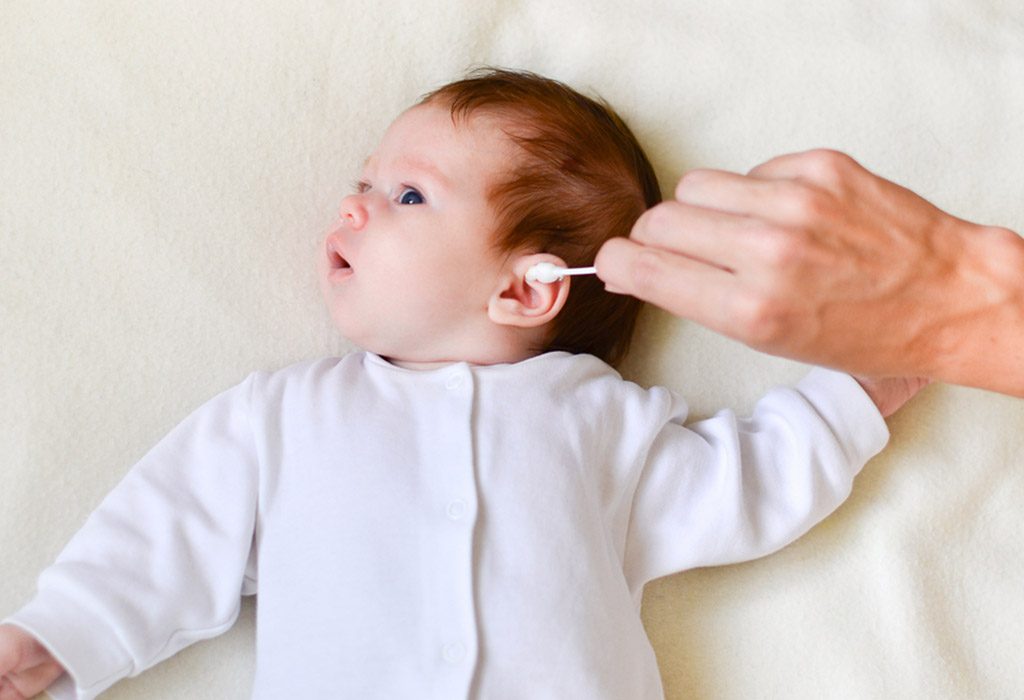 As a new parent, you will have a lot of responsibilities towards your child – cleaning his ears being one of them. Yes, it may come as a surprise, but you will pay attention to the little things (like cleaning his ears or trimming his fingernails) which may become one of the reasons for a health issue. When it comes to cleaning your baby’s ears, safety comes first. There will be earwax build-up in your infant’s ears and it is common. There are a lot of ways in which you can clean your baby’s ears but the key is to find a method that works best for you and your child.

Earwax, which is also known as cerumen, is a sticky gooey material produced inside the ear. It consists of dead skin cells and is secreted by the glands situated in the lining of the ear. As irritating as earwax might be, it is actually a sign of the normalcy of your baby’s physiology. Furthermore, secretion of earwax is the body’s natural method of preventing water or external infection from entering inside.

How Much Ear Wax is Normal for a Baby?

While the earwax may secrete generously from a baby’s ears, excessive ear wax in babies is generally uncommon. The amount of wax secreted from each ear may not always be the same – one ear may have more earwax than the other. The earwax secreted or produced is considered healthy earwax when the paediatrician is able to see the baby’s eardrums clearly, through the wax. If the ear canal is totally blocked by the hardened earwax or there’s a yellowish flaky wax causing discomfort to your baby, then that may be a problem.

My Baby’s Ear Is Hurting – Is It Because of Earwax or Ear Infection? When babies experience discomfort in their ears, they tend to start rubbing and pulling their ears and even poking their fingers inside their ears to scratch the ears and to get some relief from the irritation. This is a general reaction to the uncomfortable nature of earwax. However, a build-up of earwax does not result in any fever or sleeping problems, since earwax is a normal secretion.

Large amounts of earwax can be easily spotted by simply looking into the ear. Sometimes, there might be a little brownish coloured fluid discharge from the ear present inside too. If your baby is in pain, or the earwax looks different than usual, then there is a chance that the pain is from an ear infection. The obvious sign of an infection is high fever or milky white coloured pus draining out from the baby’s ears. This could also mean a perforated eardrum, which can cause intense pain and discomfort due to the earwax discharge. Among other things, if your baby becomes irritable and starts crying when he lies down and also suffers from diarrhoea, these are tell-tale signs of an ear infection and you should show your baby to a paediatrician as soon as possible.

Reasons for Earwax Build Up in an Infant’s Ears

Earwax building up is one of the natural processes of the human body, similar to that of hair growth. An infant’s ears generate wax all the time as a protective mechanism for the eardrum. Once generated, the earwax is gradually pushed out of the ear via the ear canal. This is done by extremely tiny, hair-like structures inside the ear canal called cilia.

Since the skin growth inside the ear is also outward, the earwax gets pushed out of the ear canal. Generally gooey and slightly fluid in nature, earwax is known to get denser if your baby isn’t consuming enough fluids. Similarly, when the natural tendency to push wax outside is countered by attempting to clean it with cotton swabs, the action generally results in pushing the earwax deeper within the ear canal. This starts creating an earwax buildup, resulting in a blockage of the ear canal.

How to Clean Your Child’s Ears There are enough and more ways to clean a baby’s ears. We have mentioned the best ones below – try out the one which works best for your child!

The best way to remove earwax is by using a soft washcloth dipped in warm water. First, dip the washcloth in warm water and squeeze it out to get rid of excess water. Then use it to wipe around the outer area of the baby’s ear to gradually clean any earwax that’s trickled outside. Most of the wax will fall out on its own. The remaining can be wiped off. Do not push the washcloth inside the ear canal. Take your baby to your paediatrician and let him take a look at his ears. Your paediatrician might scrape out the wax inside the ear using a tiny tool.

If the build-up is deep, you might need to use ear drops. Before administering ear drops, ensure that you use the ones which are recommended by your baby’s paediatrician. Calm down your baby and keep him engaged in some activity, else choose a time of the day when your baby is usually silent and rested. Hold the bottle of ear drops in your palms to slightly warm it up. Lay your baby on your lap, with the blocked ear facing towards you. Use an eyedropper and fill it up with the solution in the bottle.

Place the dropper close to the baby’s ear, and drop the solution gradually, until the baby’s ear canal is completely full. Wait a few minutes for the solution to settle inside the ear. Your baby may feel a weird sensation, so ensure to keep him calm. The ear drops will soften the wax in the canal, which will then flow out of the ear. Next dip a washcloth in warm water, squeeze out excess water and clean up any excess drops and the wax that flowed out of the ear. Do not try to put the washcloth inside baby ears. This treatment needs to be repeated for at least three to five days as recommended by your doctor.

Safety Tips to Follow When Cleaning Your Baby’s Ears

You can try the methods mentioned above to clean your baby’s ears. It is, however, important to remember what not to do and what not to use when cleaning baby’s ears. The cardinal rule of cleaning an infant’s ears asks parents to refrain from using cotton buds. As convenient as they might seem, cotton swabs are known to push the earwax further into the ear canal. This worsens the problems and results in earwax build-up, leading to canal blockage. Same goes for using fingers, too. Sticking anything inside the ear canal can result in wax build-up or can cause harm to the eardrum, and may even rupture it. If the earwax problem starts getting worse, it is better to use baby earwax drops after consulting with your baby’s paediatrician.

Precautions to Take While Cleaning Your Baby’s Ears

As simple as it may sound, cleaning baby ears is not an easy task and the slightest mistake can cause your baby intense pain. Here are some dos and don’ts you should follow while cleaning your baby’s ears. Take your baby to a paediatrician when there is an excessive build-up of earwax in your baby’s ears and you are unable to remove the wax with the remedies mentioned above. Also, if there are symptoms of infection such as drainage of milky fluid, ear pain, fever, or even hearing loss after removal of wax, check with your baby’s doctor at the earliest.

Baby earwax is not harmful unless it collects in abnormal quantities or gets infected. Choosing safe and careful measures to clean your baby’s ears will prove to be beneficial. However, if they don’t work and you notice anything out of the ordinary with regards to your baby’s health, check with your baby’s paediatrician.

Using Mineral Oil for Babies – Is It Safe?
Should You Overfeed a Baby?
Baby’s Weight Loss after Delivery
Silent Reflux in Babies